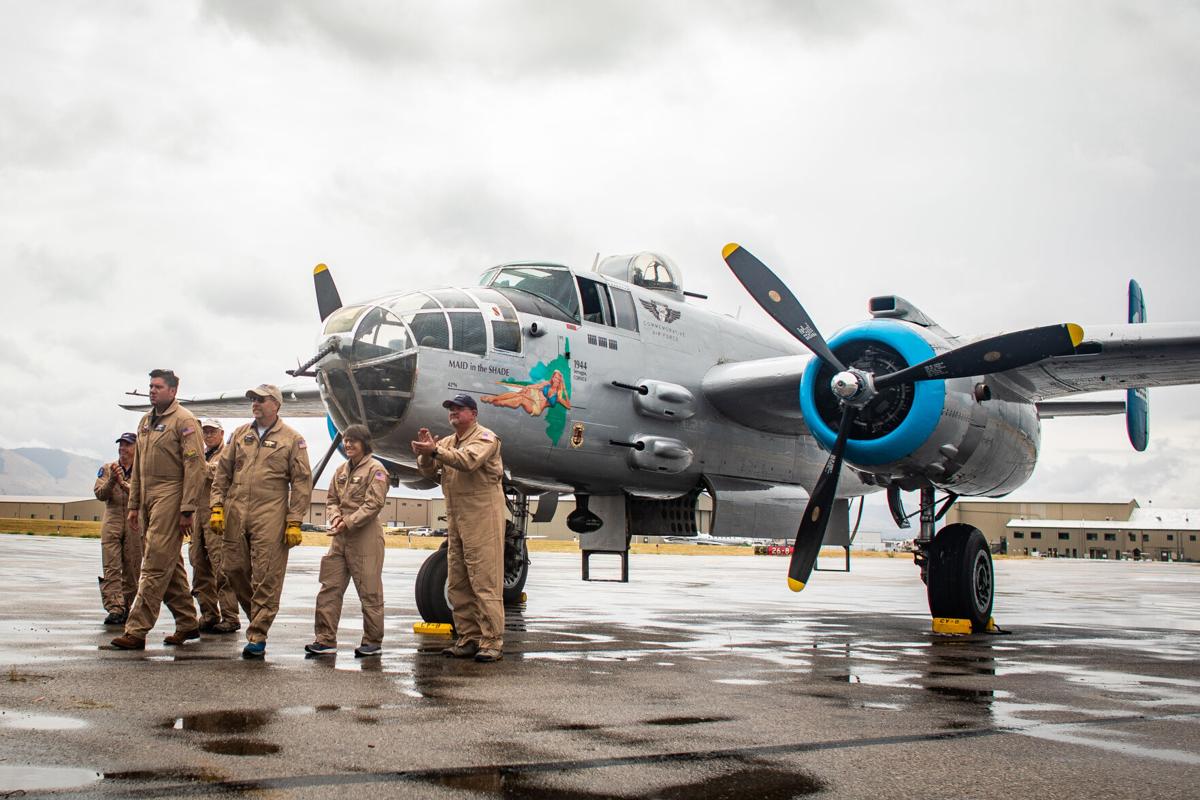 The crew of 'Maid in the Shade' applaud the national anthem and gun salute that greeted them at the Museum of Mountain Flying. They flew from Bozeman early that morning and head to Idaho Falls for the next step of their tour next week. 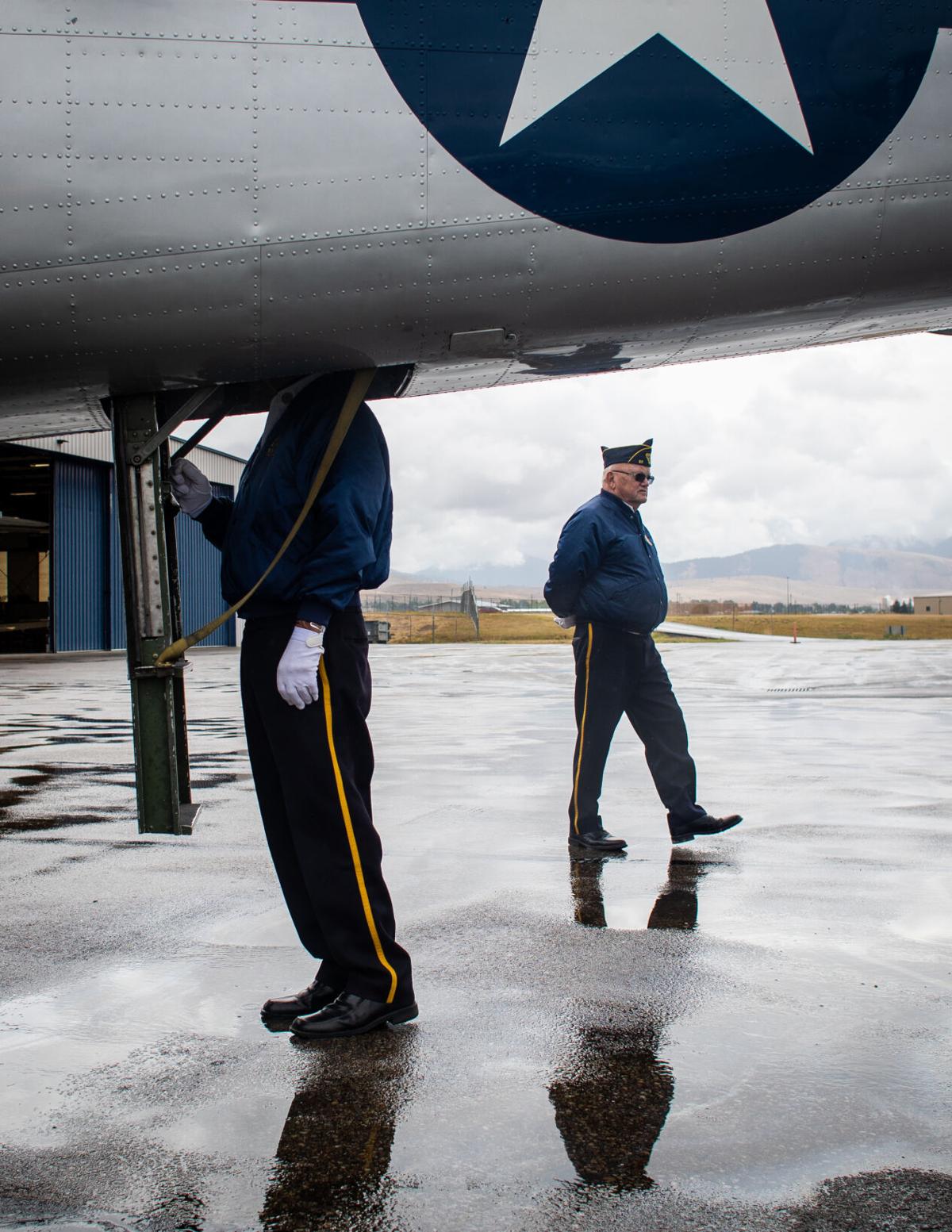 Two veterans from the Ole Beck Veterans of Foreign War Post 209 in Missoula check out the plane after landing. A crowd of veterans, museum-goers and plane enthusiasts gathered to watch the landing and explore the plane, one of only 34 of its kind still flying. 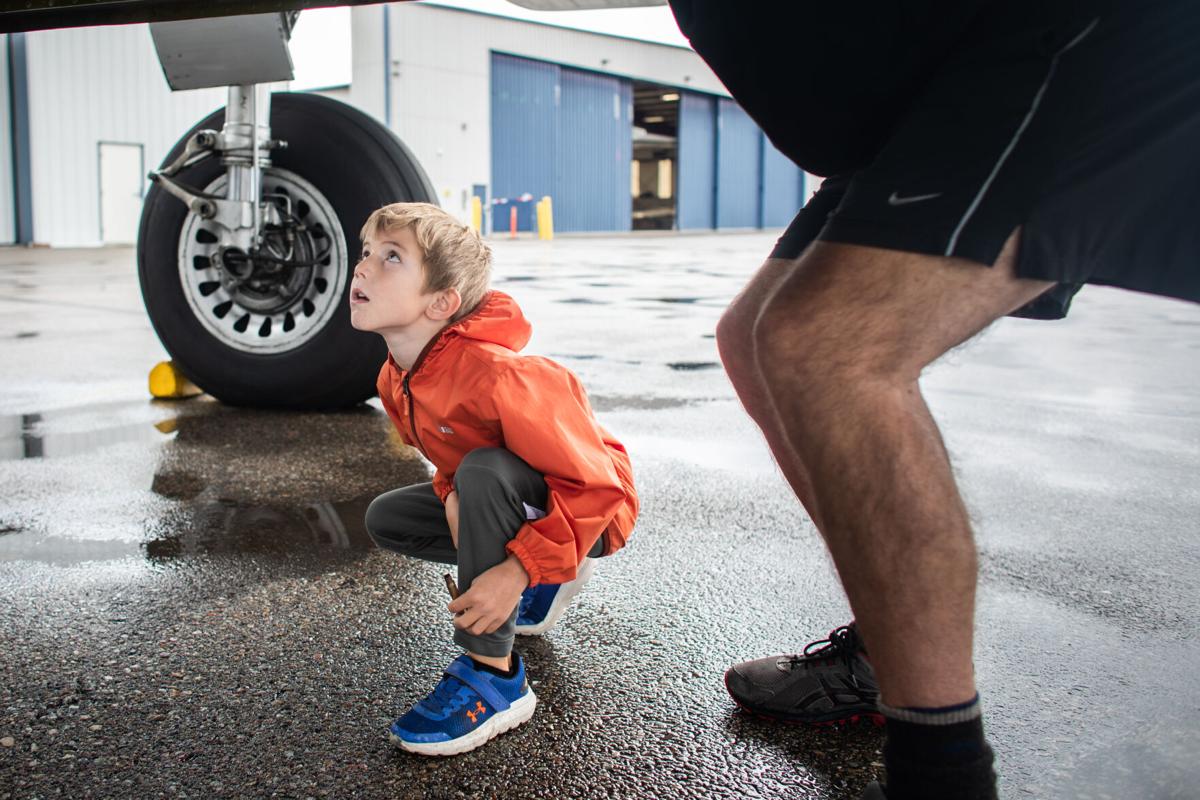 Mason Conner, 6, checks out the bomb bay underneath the 'Maid in the Shade,' examining the space used to store the 3,600 pound worth of bombs and the historic signatures of pilots on the inside. "It's pretty good," said Conner, when asked about his impressions on the plane. 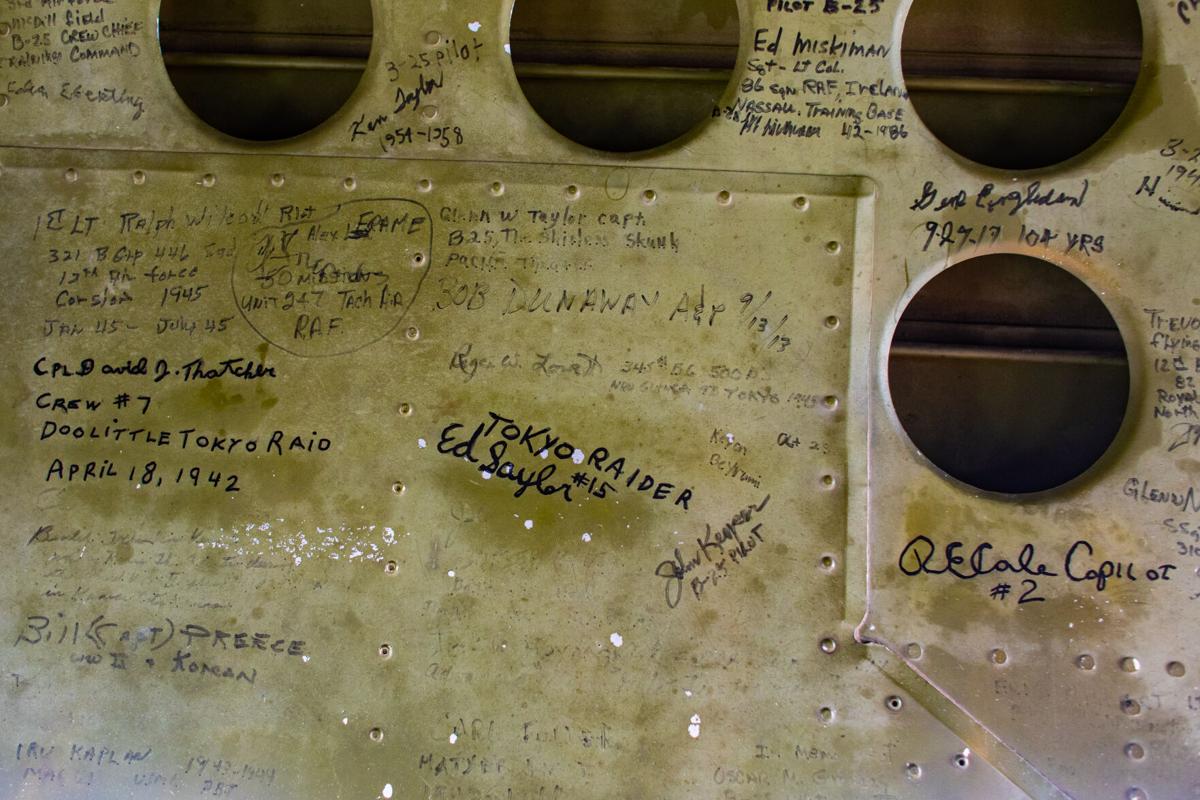 Signatures of pilots and co-pilots that flew the plane litter the inside of the bomb bay.The signatures of the riveters who did maintenance and built the plane cover the opposite wall. On the far left, the signature of Missoula hometown hero, Staff Sergeant David Thatcher, is visible. Thatcher, who died in 2016 at 95 years old, was a member of the "Doolittle Raiders" who under the leadership of Col. James “Jimmy” Doolittle executed an air raid on key Japanese location in April 1942, four months after the attack on Pearl Harbor. Thatcher and his crew bombed a steel factory. 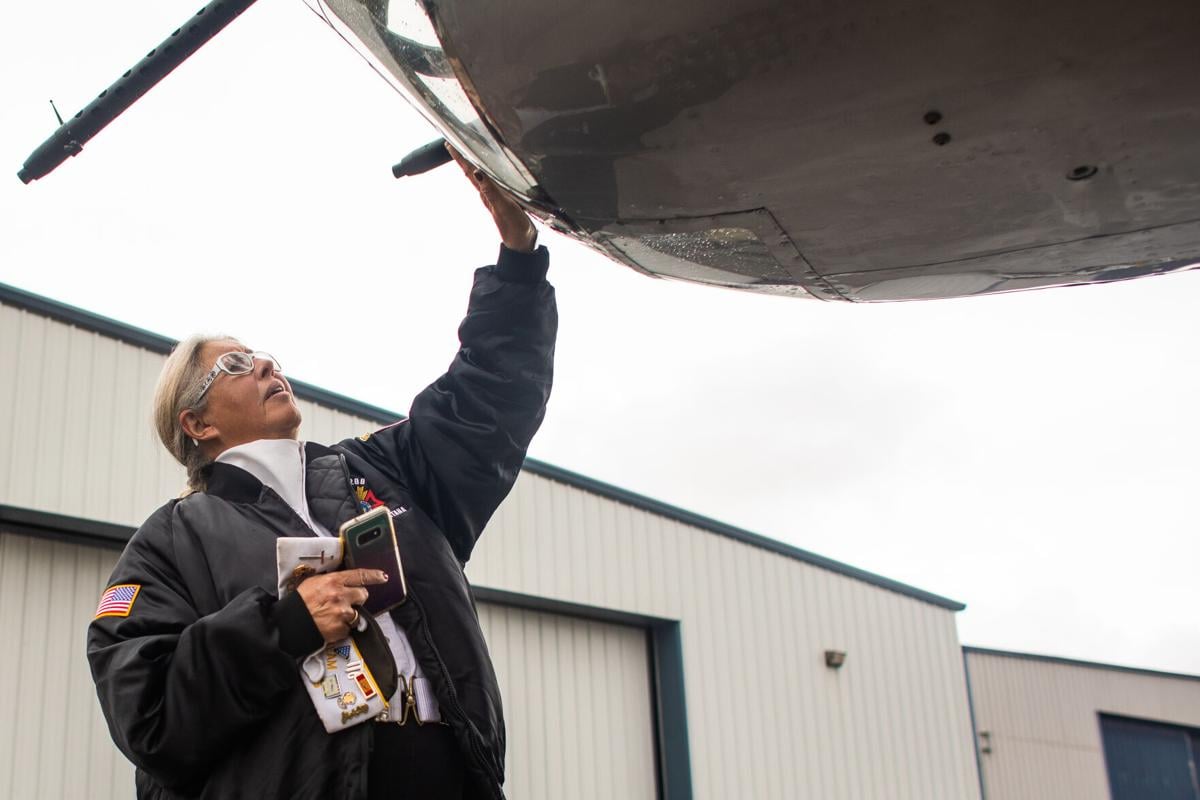 Susan Campbell Reneau reaches up to touch the nose of the 'Maid in Shade,' noticing the water trickling down on the inside of the gunning tower. "Imagine how loud it must have been," Reneau said, "but I suppose that wouldn't bother a 19-year-old boy that much." 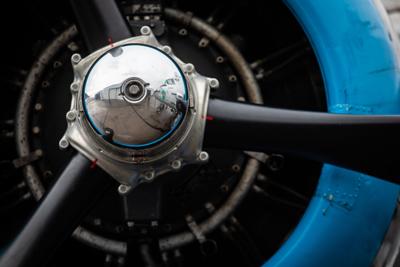 A low rumble of turning propellers and aging metal consumed the runway of the Museum of Mountain Flying Aug. 31 as the famed plane “Maid in the Shade” touched down in Missoula. The B-25 bomber, one of 34 remaining planes of its class, represented a past world for onlookers.

“Flying the plane is cool from a cool factor, it's got a lot of power,” pilot Trevor Henson said. “But the truly rewarding part is knowing that you're flying a piece of history.”

The bomber is part of the Arizona Commemorative Air Force, a non-profit dedicated to maintaining historic planes. While the plane has not seen combat since 1945, it still flies on “missions” to educate the public on how its flight crews braved dangerous conditions and fought in the largest war ever. Its pitstop in Missoula is a part of a western United States tour by the Commemorative Air Force to teach history and inspire the next generation of aviators.

Maid in the Shade first hit the skies in early 1944 from the Mediterranean island of Corsica. The crew specialized in infrastructure attacks in Italy and North Africa. After 14 missions, the plane was not used for the rest of the war.

In its next life, the plane served as a crop duster for a farm in Alabama. As the ’70s approached, the bomber was ready to be scrapped, but a last-minute decision left the plane in the hands of the Commemorative Air Force.

They spent 20 years restoring the craft, and now they use it to fly across the country. Henson said the experience is much more memorable than seeing an out-of-commission plane.

“It's a little different when you can bring something that still flies, you can hear it, go experience it, and then let people crawl around the airplane on tours,” Henson said. ”It's not just sitting behind ropes in a museum. The plane truly brings history alive.”

Barbara Komberec and her brother, Jay Enman, waited in the hangar for the plane to arrive. Their father, Malcolm Enman, served in a B-25 during WWII, and flew 55 combat missions across the Pacific, earning him the Distinguished Flying Cross.

“I think they were pretty busy at that job and needed the pilots, and that was their upward limit as far as I know,” Komberec said.

The siblings’ father was not the only Montanan to hold ties to the aircraft. On the inside bomb bay doors, a Missoula man named David Thatcher left his signature.

Thatcher grew up in Eastern Montana and moved to Missoula after the war. Though he flew in part with Maid in the Shade, he is remembered best for flying a different plane in the famed Doolittle Raid in 1942.

The raid featured just over a dozen B-25 bombers, which flew off an aircraft carrier in the Pacific and were able to launch bombs onto the city of Tokyo, Japan, before abandoning ship near China. The mission did not do a great deal of physical damage, but it changed the course of the war.

“The United States put on a raid that actually hit the Japanese mainland,” said James V. Koch, a visiting professor of history at UM. “What it did is get the Japanese attention and force them to devote a lot of their sources to defend their homeland that they might have used elsewhere in the Pacific.”

Visitors Mason and Liam Connor stood at the edge of the concrete where the plane came to rest. The boys came with their grandfather to see the historic plane, and the elementary-aged children had never seen a plane like this before. When it flew over the tarmac, they watched with wonder.

“As a kid growing up, we used to always go to the airports just to watch the commercial aircraft come and go,” the kids’ grandfather, Michael Connor, said. “It was almost emotional watching the flyover, super intense.”

After being in Missoula for the week, Maid in the Shade traveled to Twin Falls, Idaho, to continue its summer tour.