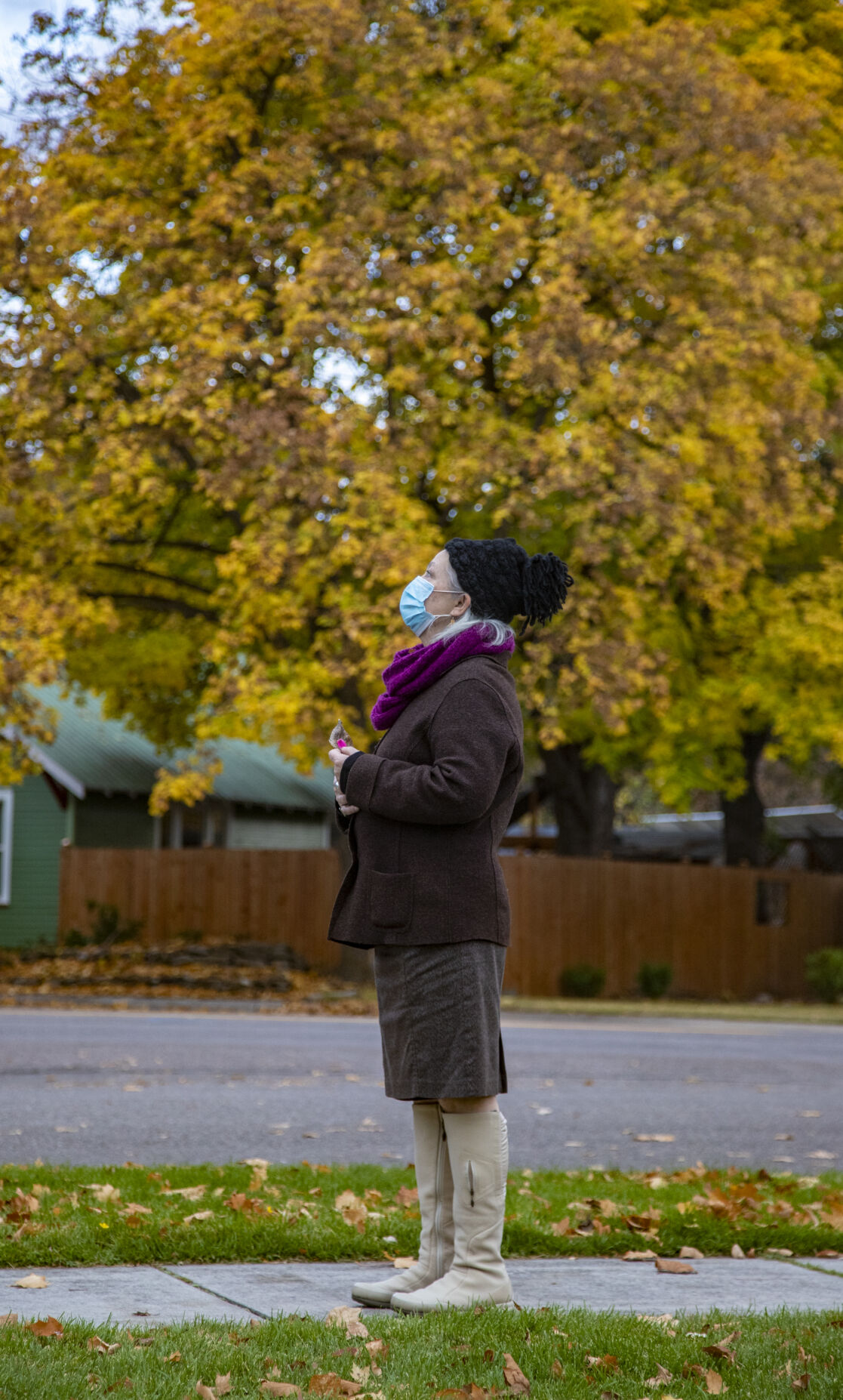 A participant of the Peace and Solidarity stops and studies the sky. It is encouraged to move at your own pace and stop to notice the small things. 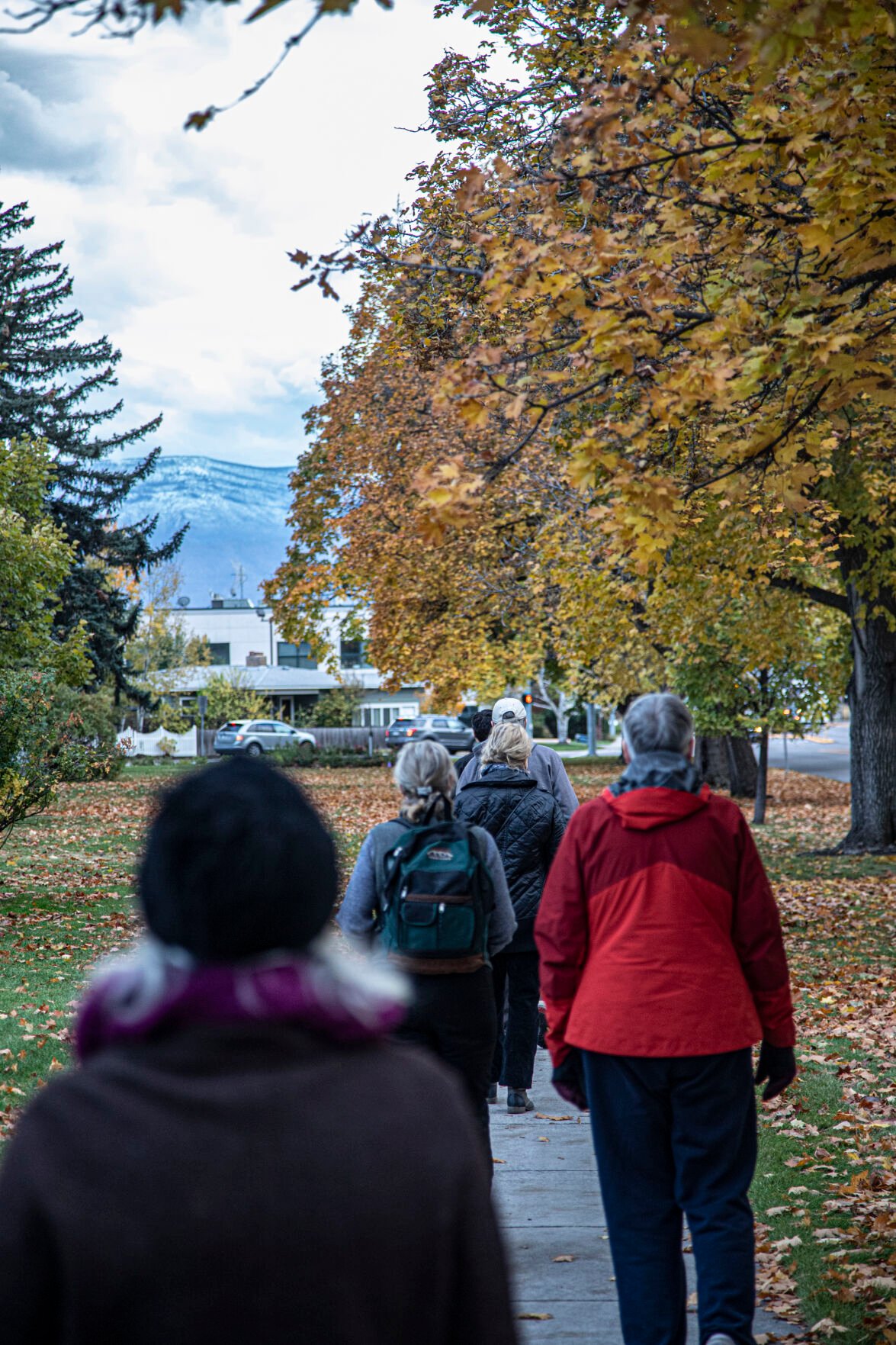 Participants of thePeace and Solidarity walk around Rose Park in Missoula, MT on Tuesday, Oct. 20. They began by discussing how important it is to take just a half an hour for yourself everyday to breath, especially right now. 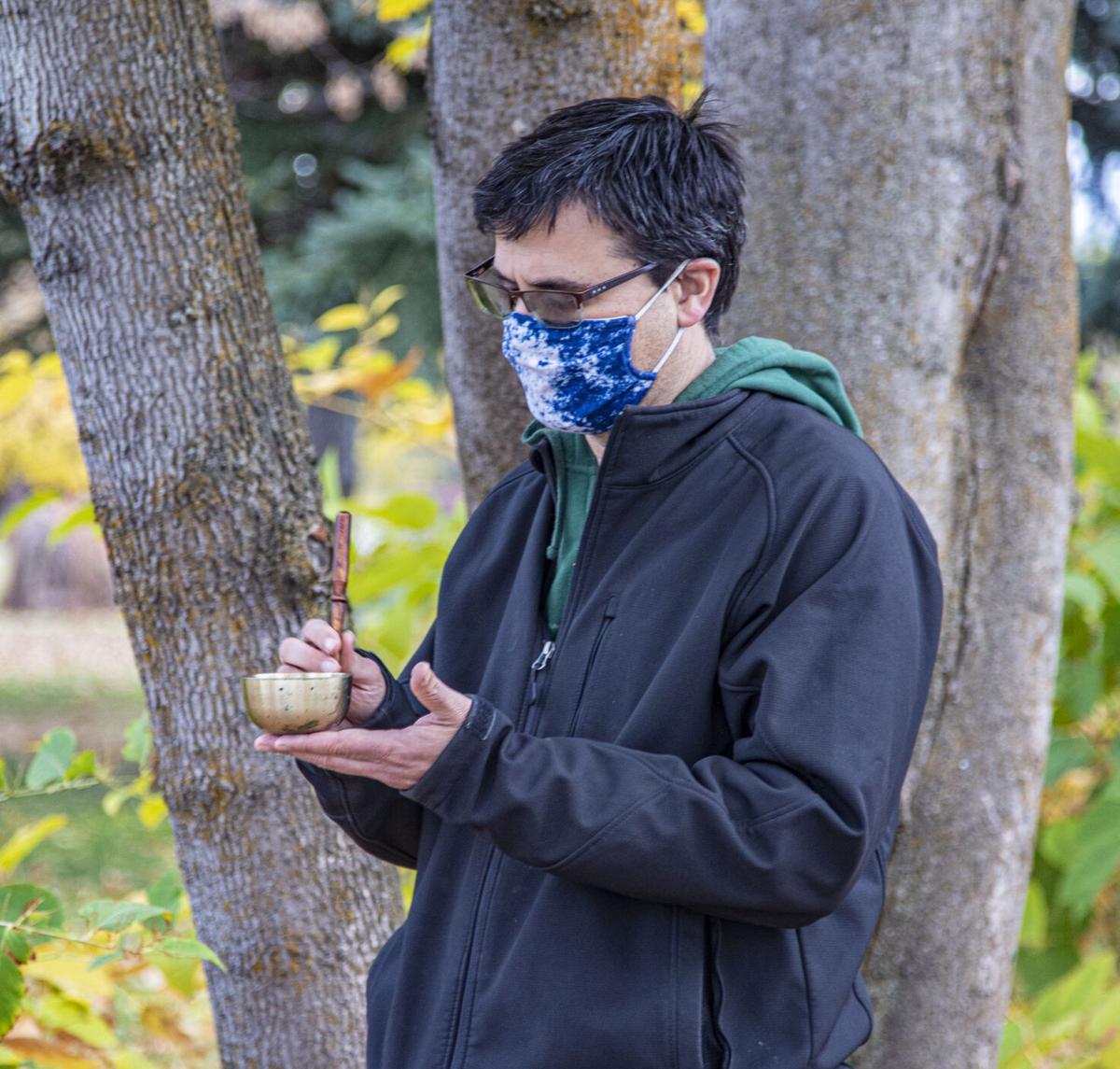 Greg Grallo taps the singing bowl to start the Peace and Solidarity walk on Tuesday, Oct. 21 at 5:30 p.m. Grallo leads whoever comes to the walk, around Rose Park in Missoula, MT. Participants walk around the park, in silence, to ask for peace during this difficult time in our country. 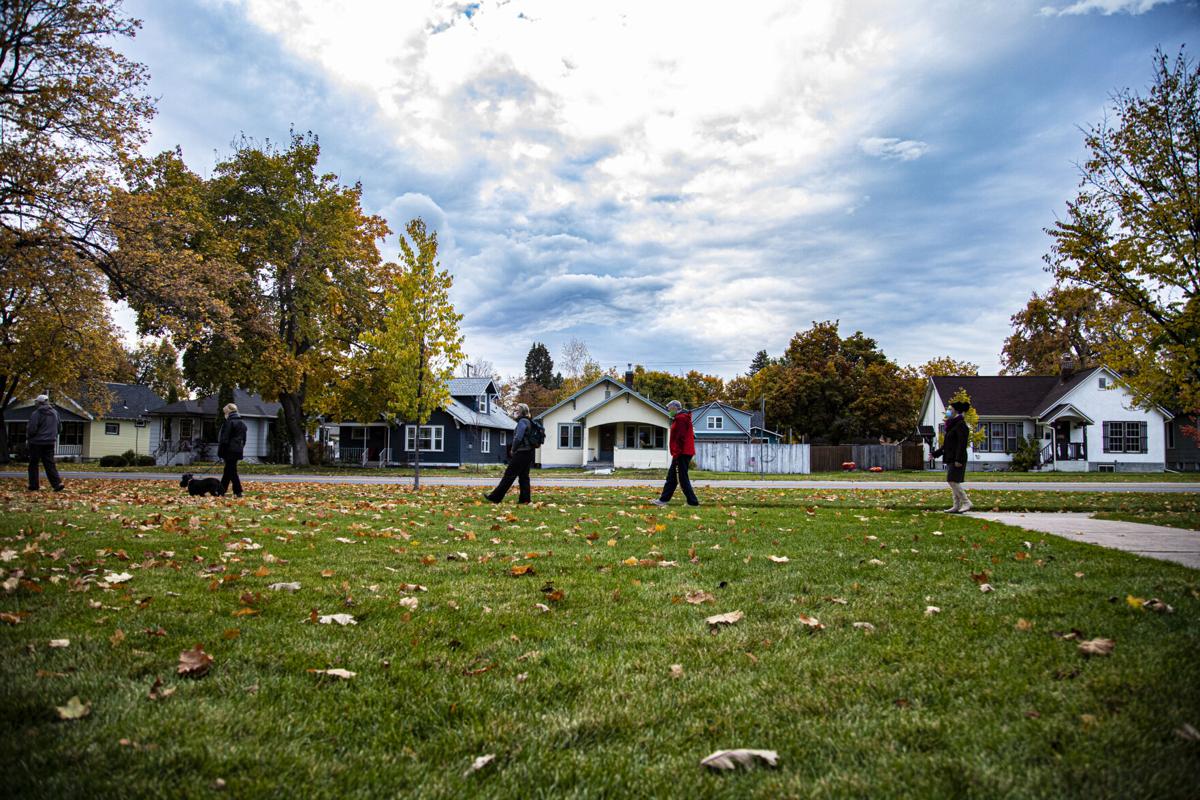 Participants of the weekly Peace and Solidarity walk, hosted by the Open Way Mindfulness Center, make their way around Rose Park on Tuesday, Oct. 20. Every Tuesday evening, three to 10 people practice this walking meditation together to reduce stress and anxiety, in solidarity with the Black Lives Matter movement.

A quiet, but crisp gong rang out among the three people clustered together.

The small singing bowl, reverberating with the noise, ordained silence among the gathered. Each person bowed, the cold nipping rain kissing their smiling faces.

The singing bowl’s holder, Greg Grallo, said a small prayer in English, a mantra of sorts, and the three people began their walking meditation, known as the Peace and Solidarity Walk, around Rose Park in solidarity with the Black Lives Matter movement.

The three-to-10 people who attend these weekly events hosted by the Open Way Mindfulness Center every Tuesday evening use this walking meditation as a way to ground themselves so they can give back to the community.

“It is a way for us to make a statement for [Black Lives Matter] and other marginalized people,” said Rowan Conred, a council member of the Open Way Mindfulness Center.

Walking meditation is a form of the practice that allows a person to move while being aware of the present moment. The act of meditation as a practice has been established for thousands of years in the Buddhist and Hindu cultures and has several health benefits.

“May all beings be happy,” Grallo said as they began their walk. “We wish each being eternal happiness.”

Each person walked at a different rhythmic pace, taking in the sensations around them. They could just hear the slight fluttering of falling leaves over the continuous thumping of raindrops on their jacket hoods and the cars speeding on the road to their right. They felt the soft wind, the almost stinging sensation of their cold cheeks, the motion of placing their foot on the ground, the motion of lifting their foot up again. They noticed their breath and the beautiful flower just to the left of their path.

Observing feelings and sensations that are occurring in the present moment is the foundation of meditation. Meditation is an act of focusing one’s attention on something and letting other thoughts go with the intention of calming their mind. The calming of the mind and the temporary release of thoughts, obligations and future plans reduces stress that can manifest itself due to those swirling thoughts in the mind.

According to the Mayo Health Clinic, meditation can improve someone’s emotional health by lowering and managing stress levels, as well as increasing their self-awareness, patience and tolerance. Physically it is proven to help reduce medical issues such as anxiety, heart problems and high blood pressure, according to a study published in the Harvard Gazette.

“We are expressing the need and expressing the hope for the lessening suffering,” said Suzanne Heindrich, a regular participant in the Peace and Solidarity Walk.

According to Grallo, by practicing walking meditation, the group is cultivating peace they can continue to develop outside of meditation. It is also another act they can do in support of the Black Lives Matter movement other than a protest.

An ambulance blared past the small group in the park. They continued to walk, some with their eyes partially closed, focusing on the Earth beneath their feet. Others had their heads up and on a lazy swivel, taking in the environment around. One touched a yellow-red leaf on a small tree. The stark sound of the ambulance waned as it hastened away. The group could hear the rustling leaves again. The rain stopped, and the sound of birds chirping took its place.

Zen Master Thich Nhat Hanh, the world-renowned Buddhist monk and teacher on whom the Open Way Mindfulness Center bases its teachings, coined the term “engaged Buddhism.” This idea focuses on using the principles of mindfulness and Buddhism to address the current world challenges. Nhat Hanh practiced this himself by heavily contributing to and leading a peaceful movement against the Vietnam War in the 1960s, according to a New York Times article.

As their half-hour walk around Rose Park finally came to an end, the three people gathered again in a circle around the spot where they started.

“See? No such thing as bad weather, only bad gear,” one participant said. They all laughed through their shivers.

Grallo produced the small singing bowl from his jacket pocket, carefully placing it on his hand. The talking faded, making way for a silent respect.

The group bowed to each other, marking the end of the walking meditation.

The three people said their goodbyes and slowly got in their cars. The rain resumed, the cold, nipping droplets hitting their cars as they drove away.