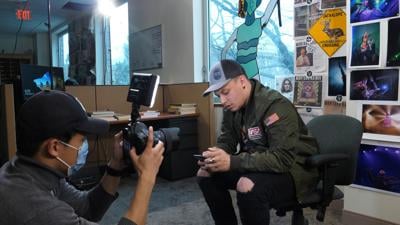 Kasperthesaint is a rapper and multimedia artist based in Missoula, Montana. He first entered the music world when he got into writing poetry

“I always was well rounded when it came to art,” said Kasper. “I had good mentors too.”

He found inspiration in famous rappers like Kanye West, Pharrell Williams, and Billy Eilish, and other artists who think outside of the box. Kasper self-described his music genre as Emo-Rap and Singing.

He first got into a recording studio over a year ago and fell in love. Since his start, Kasper released 14 singles and EPs to multiple online streaming services.

His most recent release, named ‘5270,’ pivots to a melodic rhythm and Kasper’s singing ability. The full song premiers April 3rd, 2020.

Outside of music, Kasper is a prominent dancer. He performs as an artistic diplomat Ballet Without Borders. He explained that it is just about creation.

He explores different types of mediums like clothing, choreography, and anything that can express his feelings.

“I love expressing myself, I get to relate with others,” said Kasper. “A good friend of mine stated ‘the opposition of war isn't peace, its creation.’”

He wants his music, and other artistic creations to reflect a broader world community and have different demographics.

“I honestly just want to create art with people around the world,” said Kasper.

Are you new to Missoula? Have you been living under a rock this summer? Listening to the same albums as you did when you were a teenager out o…

With all the spookiness surrounding Halloween, there’s something possibly even more frightening coming up: Election Day. It’s right around the corner… Missoula’s municipal general election is …

An ode to the Caras Park hill

Nothing quite beats a soft, grassy hillside with a view. Especially in Missoula, where residents enjoy the hundreds of little green parks that dot the landscape.

In full disclosure, I own guns. I grew up on a farm, and hunting was how we fed our family. This was in a time before the fetishization of guns and the Second Amendment.

The Haunting of Jeannette Rankin Hall

Jenn Keintz wore two bracelets. One looped around her wrist multiple times, stacks and stacks of black obsidian. The beads were meant to calm and soothe. On top of it was a charm bracelet that any “Supernatural” fan would recognize as merchandise from the TV show. A pentagram pendant, otherw…

The Haunting of Jeannette Rankin Hall

Austin Amestoy: From the Montana Kaimin, University of Montana's independent, student-run newspaper, this is the Kreepy Cast for the week of Oct. 25.

As crowds cheered, drank and partied at the University of Montana’s first home football game of the year, James Jonkel sat in his truck beneath a tree near Liquid Planet, blasting NPR at a black bear clinging to the branches above.

Austin Amestoy: From the Montana Kaimin, University of Montana's independent, student-run newspaper, this is the Kaimin Cast for the week of Oct. 18.

This story has been updated to include comment from UM President Seth Bodnar. Following publication, UM announced it would place Rob Smith on paid leave pending an investigation into the professor's blog. The Associated Students of the University of Montana passed a resolution calling for Sm…