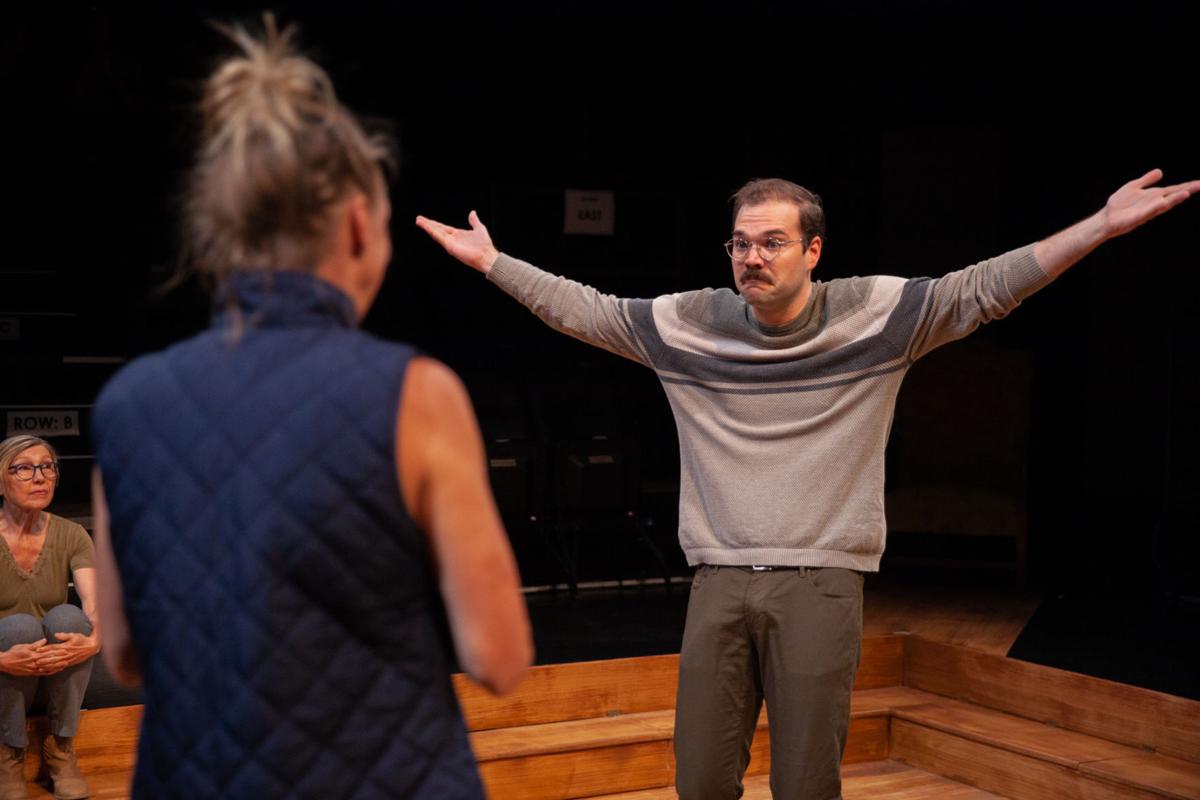 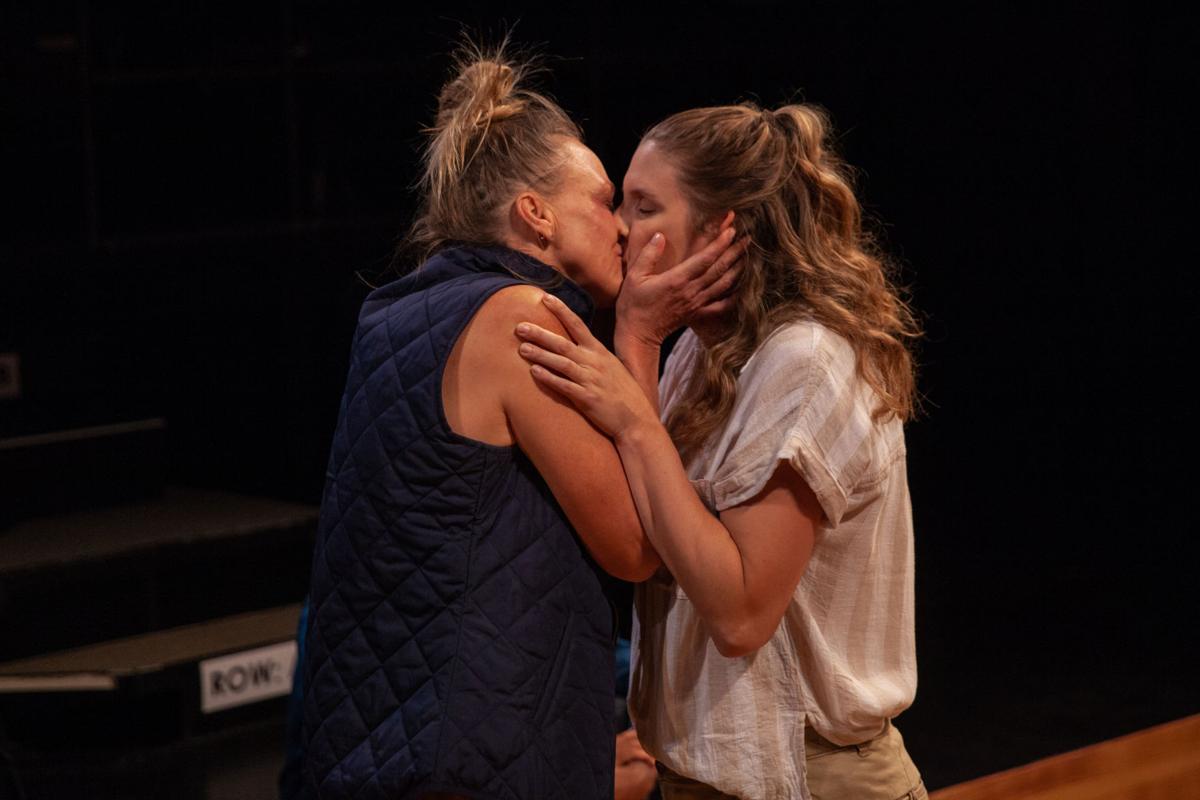 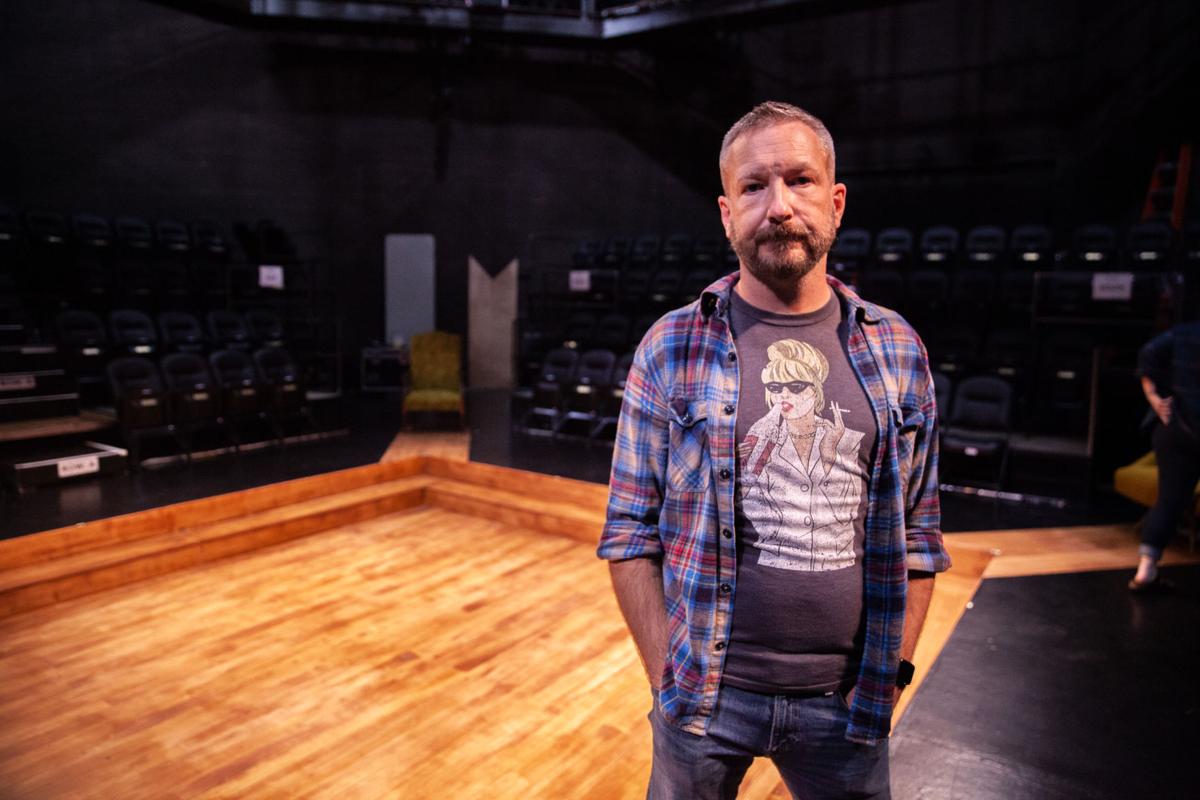 Michael Legg, director of "Go. Please. Go." poses for a photo inside the Masquer Theatre on Aug. 28, 2019. "Go. Please. Go." was written by Emily Feldman and is presented by Legg and the Montana Repertory Theatre as a part of its seasonal tour. Usually, the MRT tours around the United States, but this year all of its productions are being performed locally, within Montana.

Break-ups signify the end of a relationship. For the world premiere of “Go. Please. Go.” it’s just the beginning.

Jeremy (Bear Brummel) decides to move out after his relationship with Emily (Jenni Putney) fizzles. He doesn’t. Instead, we follow the pair through the next sixty-five years of their lives — through adjacent marriages, children, death and even tap-dancing classes. We watch the pair fight, kiss, talk past one another — and never let the other forget to pick up garbage bags at the store (the ones with the grey ties, mind you).

Emily Feldman, the New York-based playwright on her way to Juilliard this fall for her second master’s, wants the play to feel like a lifetime experienced in ninety minutes. “About twenty pages into the first draft, I thought it would go on for the rest of these characters’ lives,” she said.

We can thank Feldman’s decade-long friendship with Michael Legg, the new creative director at the Montana Repertory Theatre, for the world debut of the play taking place at UM.

Feldman and Legg met through the Actor’s Theatre of Louisville. Legg ran the apprentice program while Feldman worked as a literary intern. They bonded quickly over a shared love of Thornton Wilder’s “Our Town” and have been close friends since. Feldman considers Legg to be one of her first champions, which Legg attributes to her strong voice as a writer and her sparse, direct dialogue.

When Legg took over as creative director at the MRT, the pair took advantage of the opportunity to work together on a full-length play. Feldman sent Legg several options, but Legg chose “Go” for its Wilder-esque themes of life’s ephemerality and the importance of companionship.

“It’s an attempt at identifying the things in our lives that are universal… what are the feelings we have surrounding our relationships? What are the commonalities we have in terms of how we relate to other people… it explores that through the lens of a single relationship,” says Legg.

The cast, consisting mainly of non-Montanan actors, believes Missoula will leave the theater thinking about the most important relationships.

“What sort of love do they want to surround themselves with?” says Brummel.“The love of a friend, or partner? What are the relationships that are most important to these people? Your parents? Your other family? It’s important to not take your relationships for granted.”

Despite its sentimentality, “Go. Please. Go.” is hilarious, with realistic and crisp dialogue at a quick pace. You might even forget you’re in a theater and not witnessing your friend-couple bicker. The play paces itself parallel to life, providing laughter and heartbreak in the same breath, moving us on to the next milestone.

As explained by cast-member Yonatan Gebeyehu, “You laugh until you cry and you cry until you laugh.”

“Go” kicks off Legg’s second season as the creative director at the Montana Repertory Theatre and is the first play he’ll set on the stage. Legg began his tenure with Plays on Tap, a series of short plays set in unconventional locations, such as the backseat of a car parked downtown. Legg considers the Plays on Tap to be an outreach to the community, an invitation to get to know the theater community before committing to a full-length, brand-new play.

Roughly half the plays in MRT’s upcoming season have never been seen before. Up next in the season is “Love That Dog,” which will be its second-ever production. The last play of the season, “Back to School,” will consist of five debut plays set in a middle school classroom, so emotionally prepare to feel 13 again.

Despite the new work, Legg wants to breed a sense of familiarity within the community.

“I want to keep bringing back the same playwrights, the same actors… so you can know them as well as I know them,” Legg said.