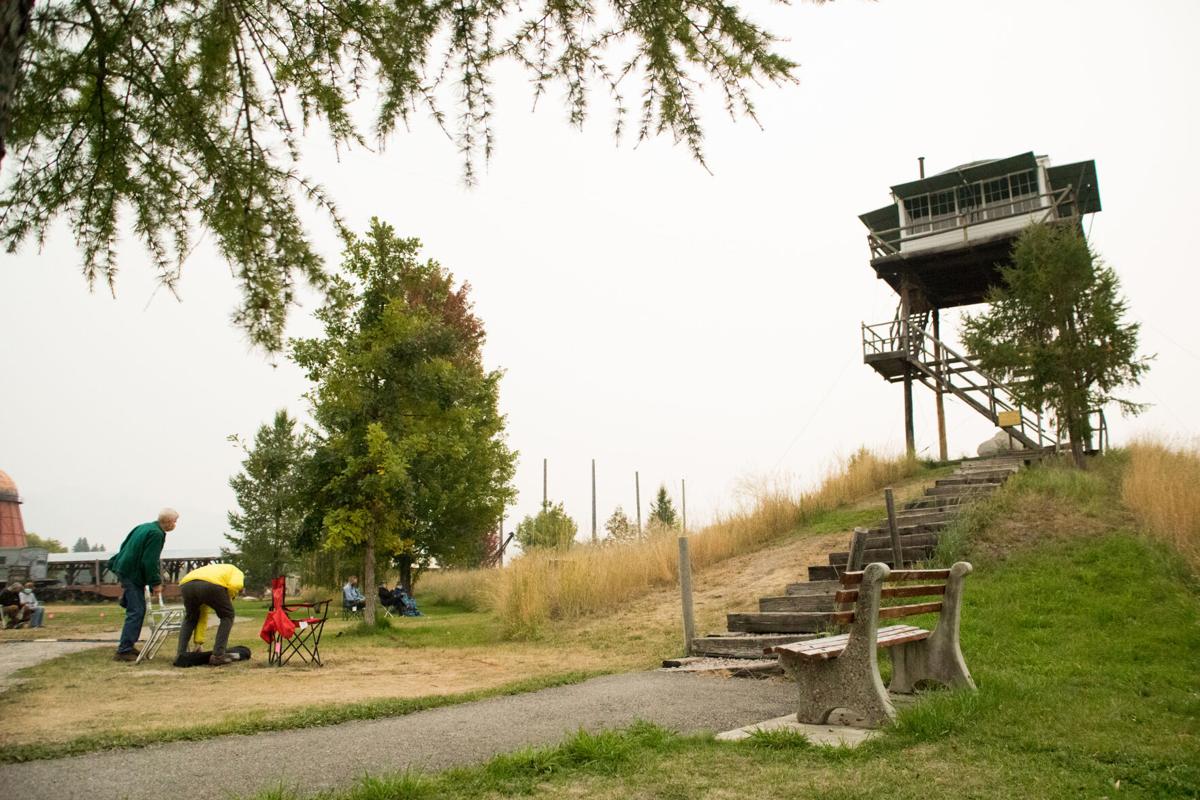 Theater-goers set up their chairs to watch Montana Repertory Theater's "The Fog," play, set against the backdrop of the the fire tower at the Historical Museum at Fort Missoula. Audience-members sat on blankets and camp chairs in socially distanced boxes marked out on the grass in front of the tower. 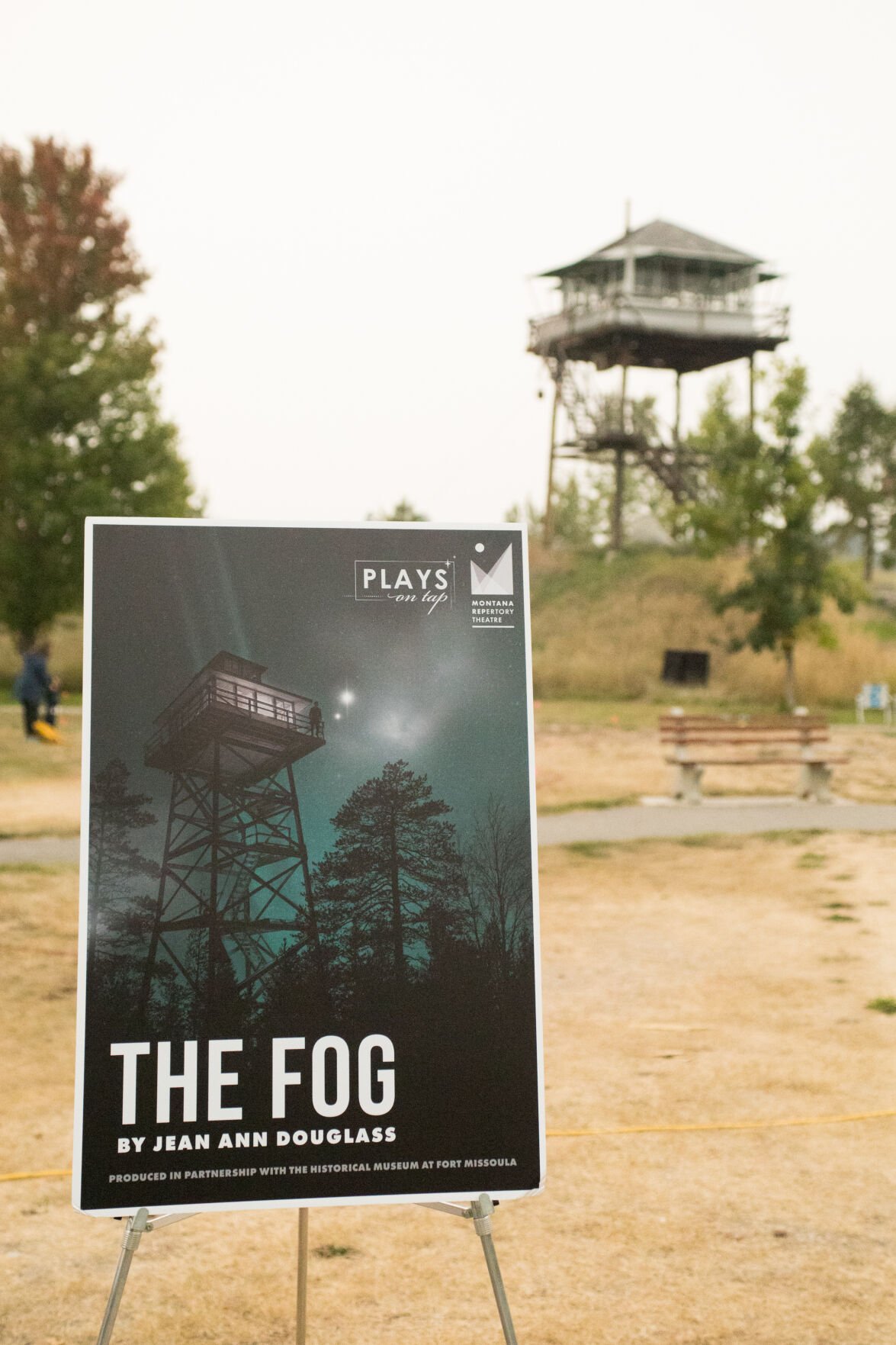 The historic fire tower at the Historical Museum at Fort Missoula stands behind a sign for "The Fog" play at a showing of the play. Guests checked in at the sign and were walked to their socially-distanced box by director Michael Legg. 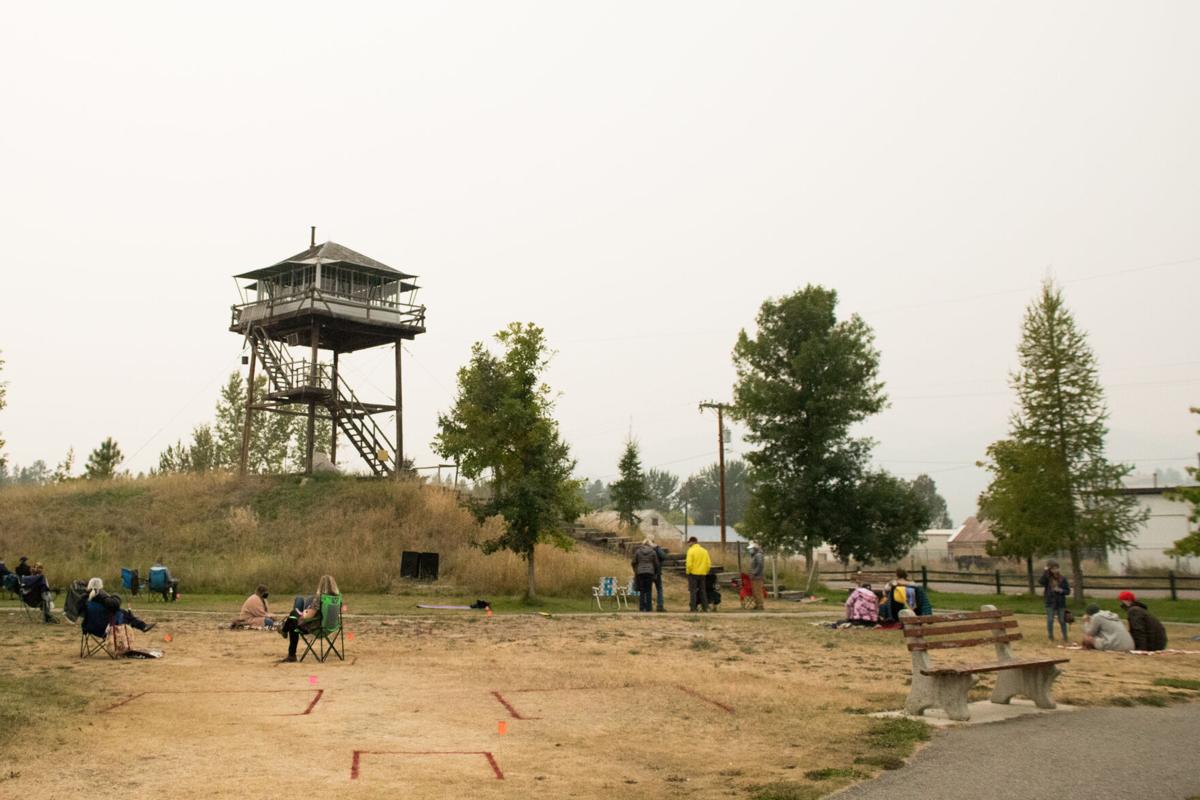 Socially-distanced audience members sit in one and two-person boxes spray-painted on the ground to watch "The Fog." The three cast members in the show also socially distanced, never coming within six feet of each other during the show.

Square boxes painted on the ground sat six feet apart around the towering fire lookout at Fort Missoula. About 25 people sat in lawn chairs situated inside the painted boundaries. Most wore masks, despite being seated outside.

The crisp autumn air of that mid-September evening was betrayed by the heavy smoke. The audience wrapped themselves in blankets and prepared to watch Montana Repertory Theatre’s newest play, “The Fog,” on its opening night.

“Hello, ladies and gentlemen, and welcome back to theater,” Michael Legg, artistic director of the Montana Repertory Theatre, said.

Every year, the Montana Repertory Theatre commissions the “Plays on Tap” series, a collection of original, short and site-specific plays. In the past, they’ve performed in offbeat places like hotel rooms and cars. But an indoor set wasn’t an option this year. Without ticket sales at the door, it raised the question: Could theater survive during a worldwide pandemic?

“I’ve seen a lot of theaters closing, or trying to transition to a Zoom-based platform, but I didn’t want to do that,” Legg said. “I already spend four-to-eight hours on my computer every day, and I didn’t want to add to that number.”

Legg had to think about live performance differently to avoid transitioning to online theater. He was already armed with the unconventional experience from “Plays on Tap,” so hosting the play outdoors didn’t seem like such a stretch. And Legg had just the place.

He always loved Fort Missoula. Montana’s rich history was interwoven through every inch of lush lawn and old log. More than anything, Legg was always captivated by the ancient fire tower overlooking Missoula and knew it would be the perfect performance space.

Next was finding a play. He reached out to playwrights across the country to see who could devise a piece in which the characters never physically came into contact with one another — without the play referencing COVID-19. If theater was going to survive, creating contactless plays that existed outside the pandemic was essential.

Legg had worked with Douglass before and had always enjoyed her work. When he contacted her in July, Douglass mentioned she had an idea based on Timothy Egan’s book, “The Big Burn,” a historical account of the U.S. Forest Service and the Great Fire of 1910.

The book describes a devastating wildfire that burned 3 million acres across Montana, Idaho, Washington and parts of British Columbia. Theodore Roosevelt acted as the protagonist of the book, battling Congress for increased conservation efforts with his head forester, Gifford Pinchot, by his side.

Though Roosevelt was an admirable main character, it was actually Pinchot who inspired Douglass’ play.

Pinchot lost his fianceé, Laura Houghtelling, to tuberculosis before the couple could marry, but he never gave her up. He was convinced he could communicate with her in the afterlife, and proceeded with the wedding after her death. Essentially, Pinchot married a ghost.

“Gifford Pinchot is a perfect example of a daguerreotype boyfriend, handsome and moody and private, and unusually dedicated to the one woman in his life, even after her death,” Douglass said.

Douglass centered the story around a fanatical Pinchot (played by Mark Plonksy), his ghost wife, Laura (performed by Erin Agner), who sits bored in the fire tower all day long, and a recent graduate of forestry named Gil, recently hired by Pinchot to work on conservation projects.

She wrote the play in her Brooklyn apartment with windows that look out at big, green trees on her street. Legg would send Douglass pictures and videos of the fire lookout to give her a sense of location for scenes.

Legg said scripts can take a year to write, often longer. Douglass wrote “The Fog” in less than three months, but continued to tweak the script until opening night.

Stephen Jay Clement, a UM sophomore who plays Gil, said they rehearsed over Zoom. Rehearsals at the lookout waited until three days before the show. He also said it was loud.

“When we were rehearsing the night before the show, there were people playing bagpipes across the road, we heard someone using a chainsaw and there was a football game going on,” Clement said. “It was kind of funny, but that’s just a part of a live performance.”

“The Fog” presented itself as a live performance that was part love story and part cautionary tale. As indoor theater and performance suffer from COVID-19, some creative professionals are unwilling to give up their craft.

“We have an opportunity to reimagine what storytelling can be,” Legg said. 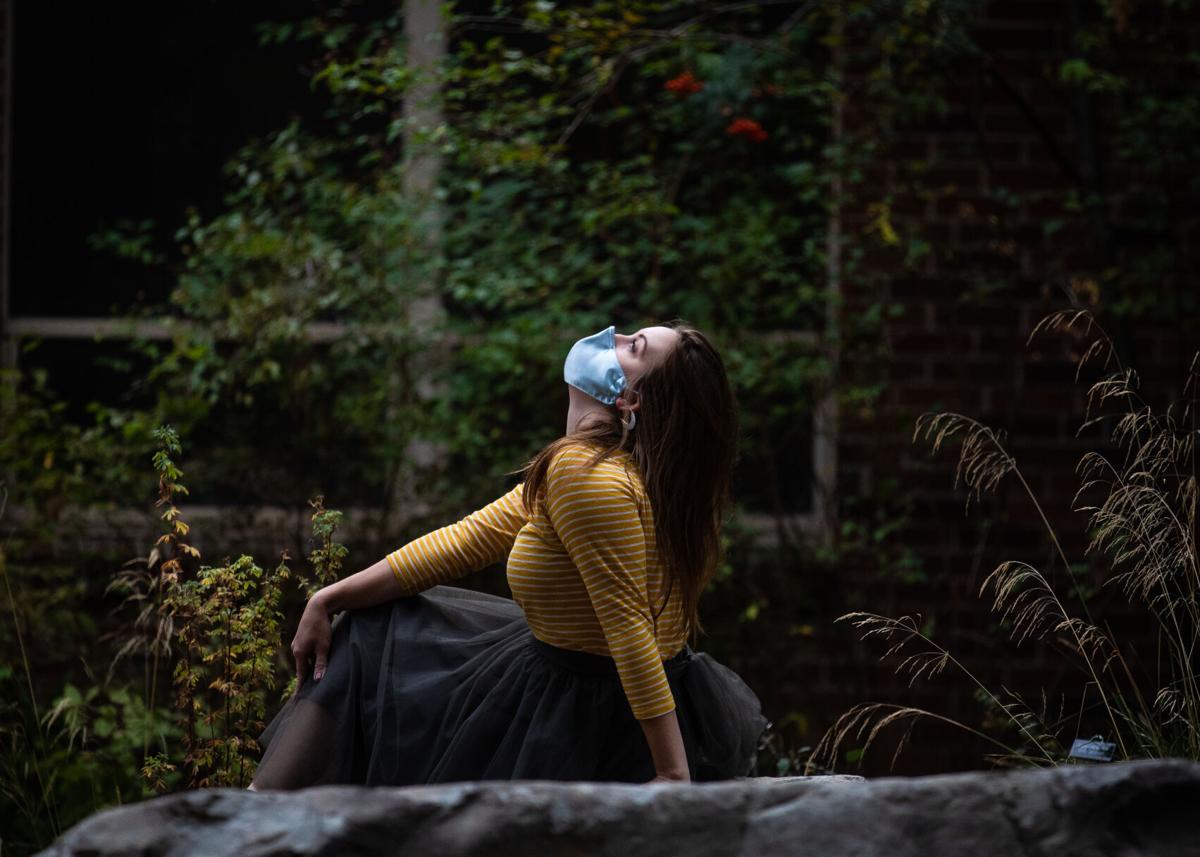 UM dancer Desirae West gazes upward during a still, quiet moment in her Dance on Location piece, performed in the Native Plant Garden outside the Natural Sciences Building. Dancers in the Creative Practice I class created the site-specific dances in groups of three, letting their environment influence the choreography of their dancing. The annual dance concert will take place Thursday, Sept. 24 and will be social-distancing friendly, with mask wearing required. 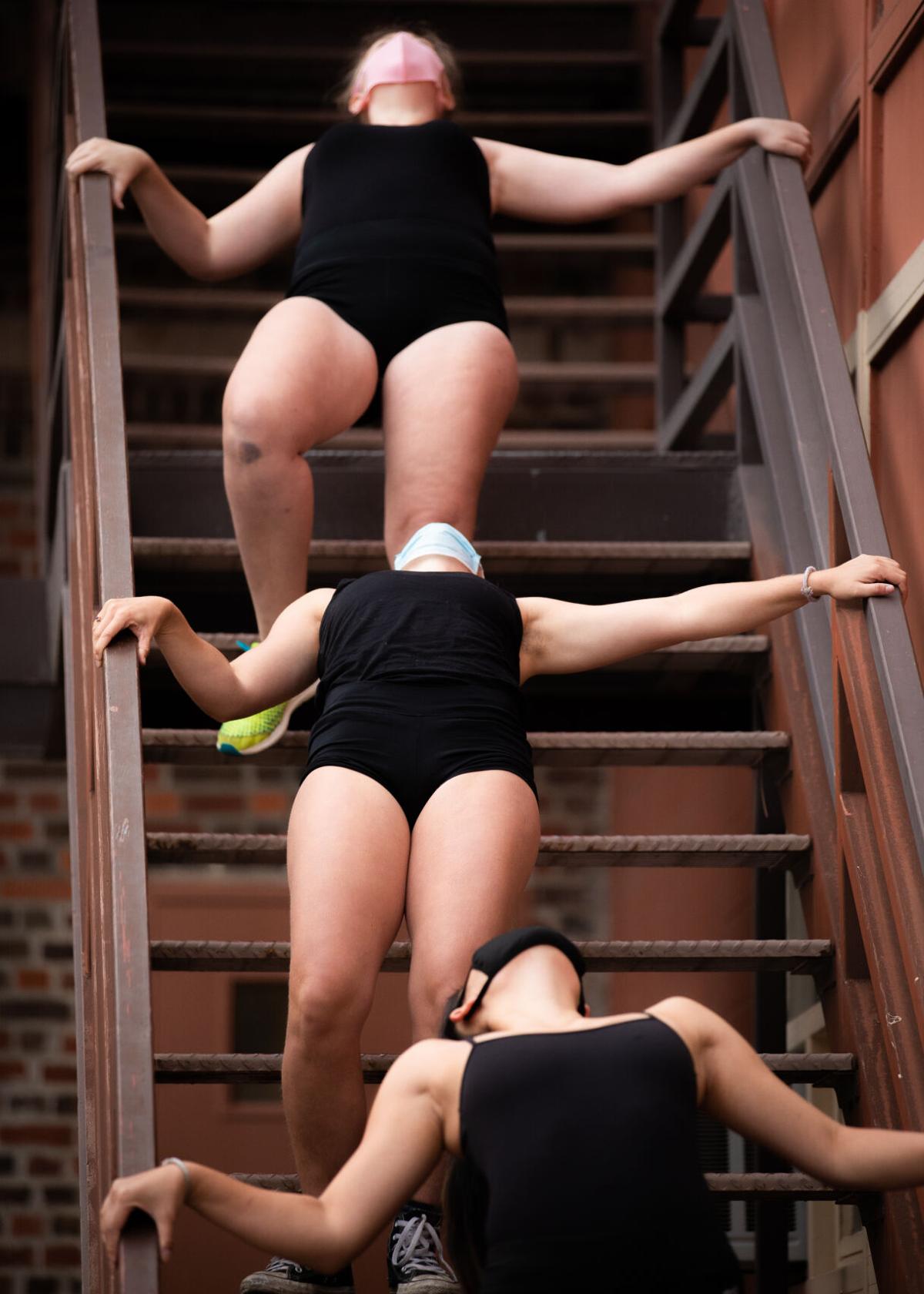 UM dancers Ashley Lindgren, top, Renee Ross and Rebecca White dance on the stairs that climb the east side of the Social Sciences Building. The dance, titled "Internal Scream," took the dancers up and down the staircase and finished with them charging down the steps screaming. 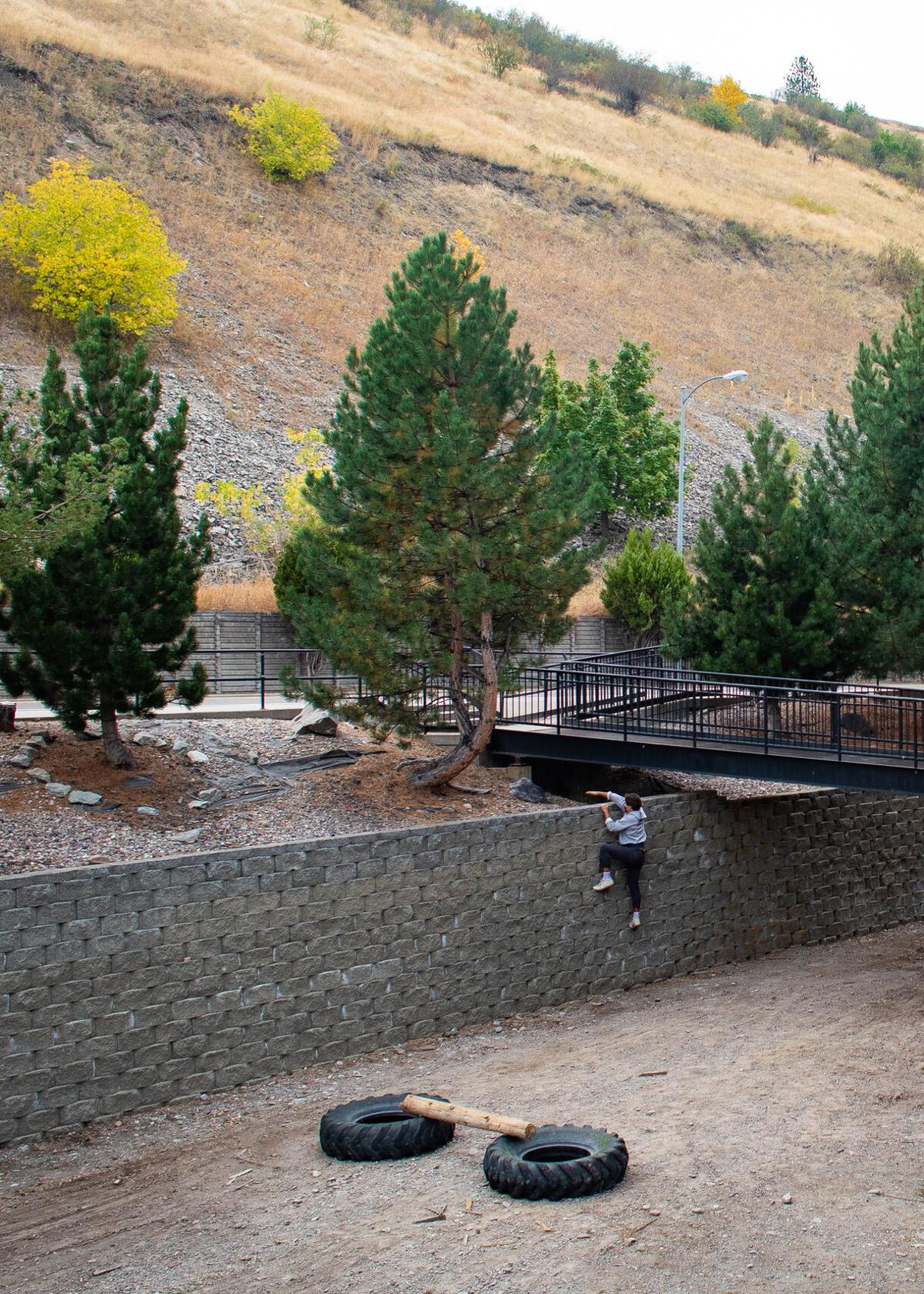 UM dancer Diego Kjelland climbs a retaining wall behind the Schreiber Gym on the far South East side of campus as part of his dance, "The Top of the Stairs." Kjelland and his fellow choreographers, Brandon Bergen and Emily Point, used items found in the environment to start their dance - scraps of wood and tires. 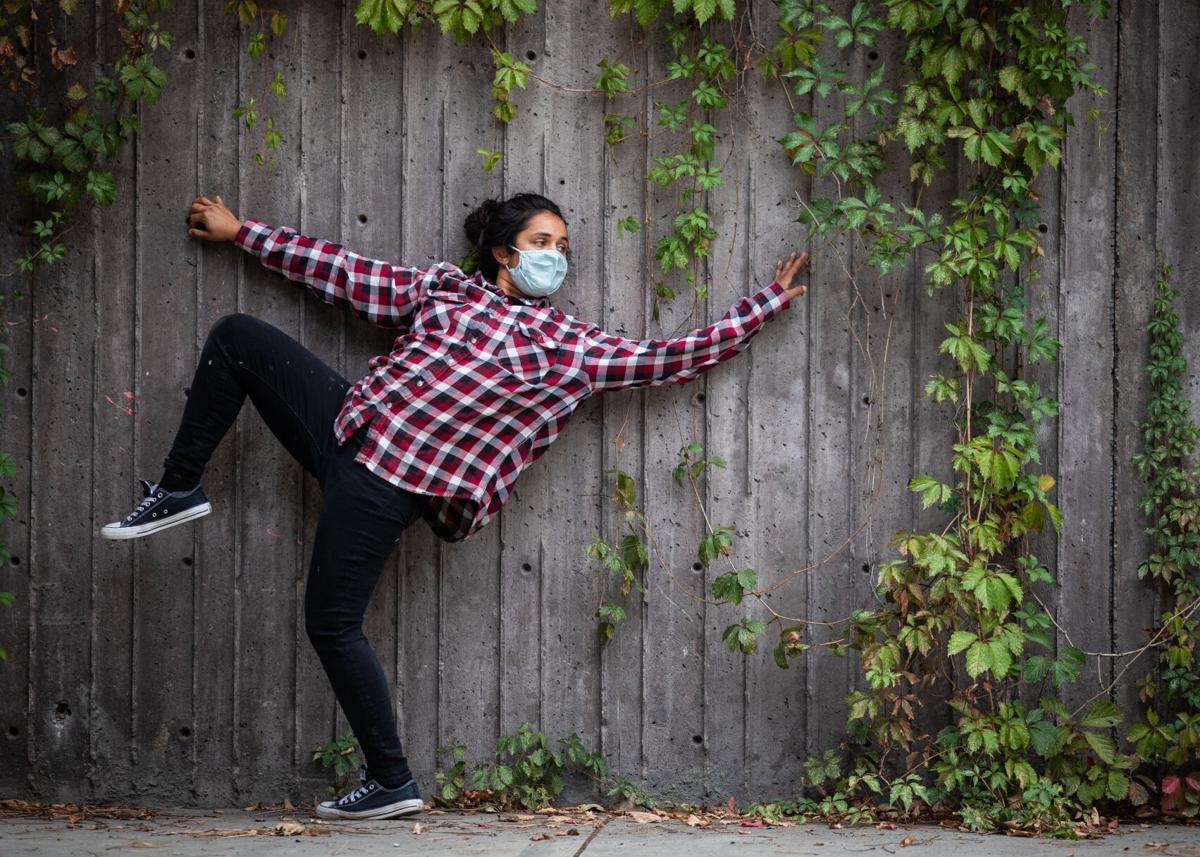 UM dancer Sky Coutinho interacts with the vines and the retaining wall at the far east side of the parking garage as part of her groups' dance "Daylight Underground." The dance sent the three dancers - Coutinho, Maria Chimarusti and Nicole Cukale spinning through the rows of bike racks between the retaining wall and the garage. 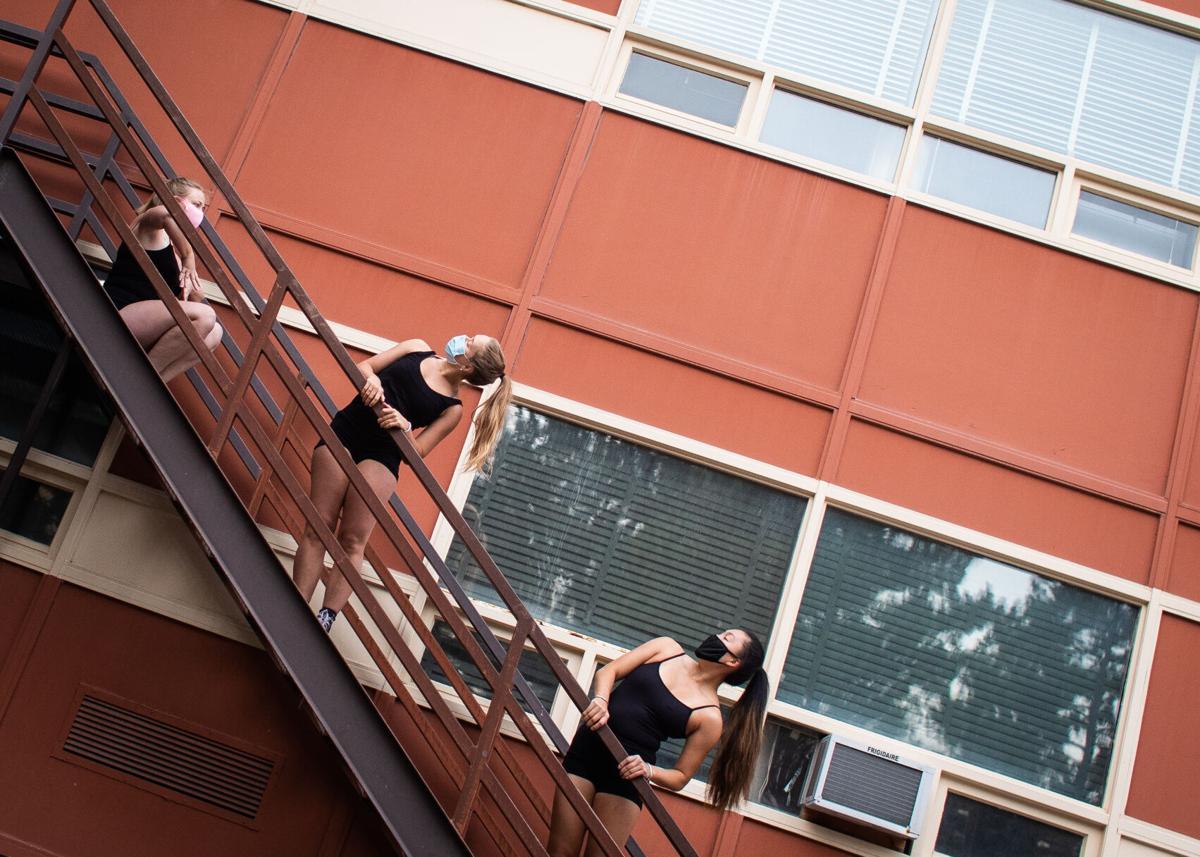 UM dancers Ashley Lindgren, left, Renee Ross and Rebecca White dance up the staircase on the side of the Social Sciences building during their piece, "Internal Scream." 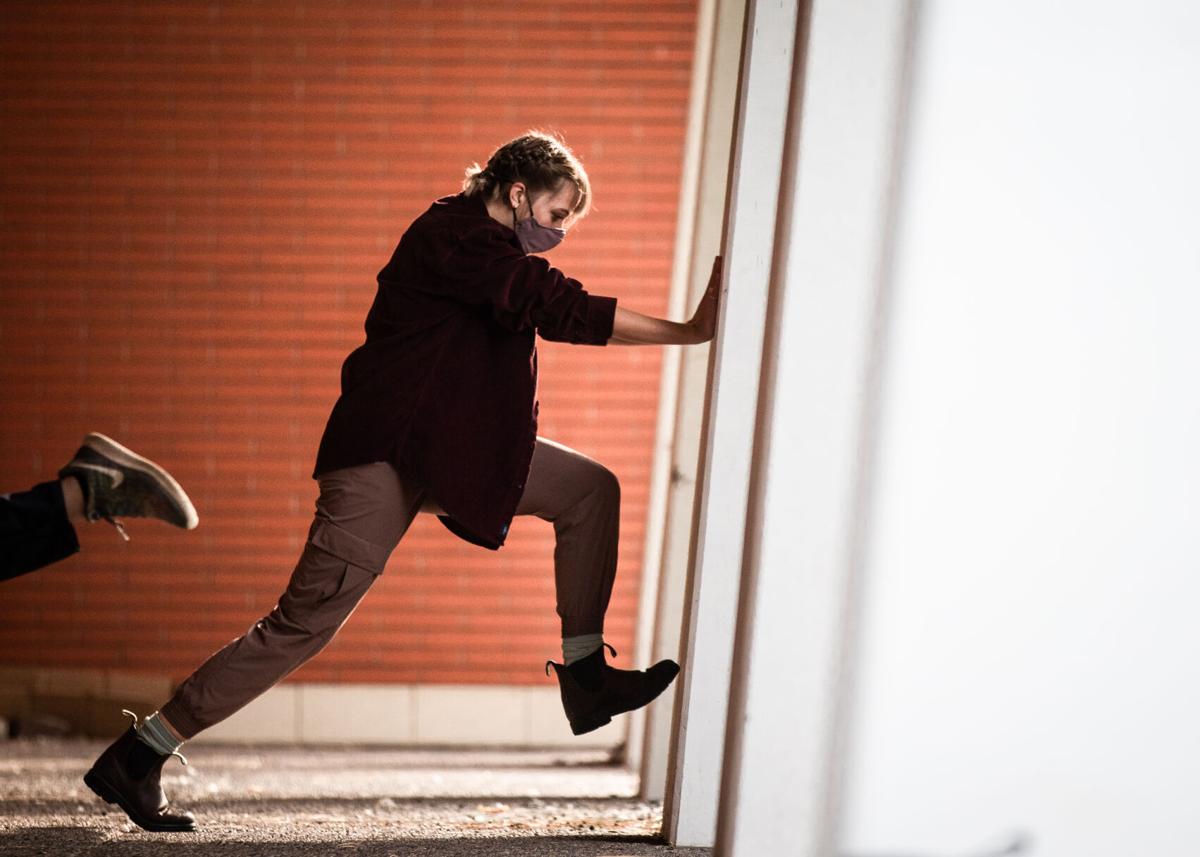 UM dancer Maeve Fahey leans against a pillar on the south side of the Clapp Building during the beginning of her group's piece, "Sanctuary." The dancers interacted with the strange shaped columns and enclave that surrounds the building as well as a tall pine tree close by as part of the dance. 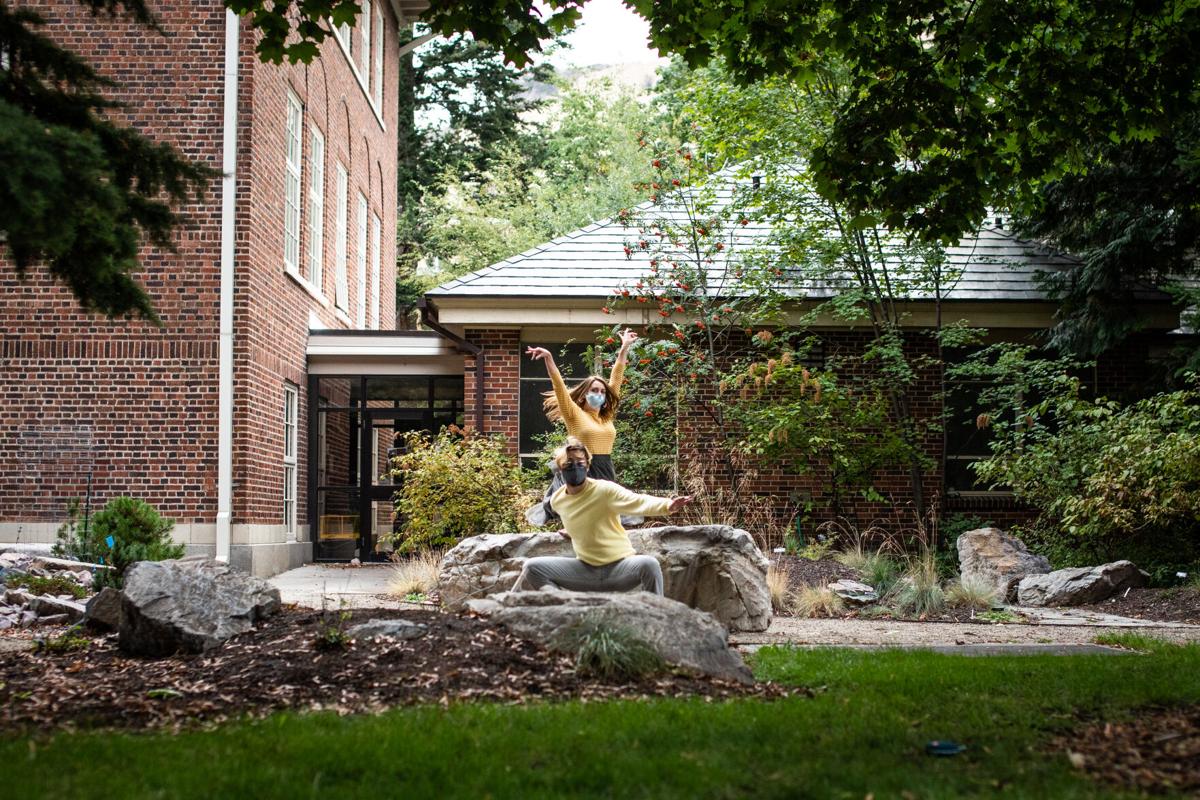 UM dancers Desirae West and Matthew Miller come together in the middle of the Native Plant Garden near the Natural Sciences building in their dance, "Return." The playful piece used the garden as the scene of a story as the dancers ran up paths, hid behind trees and jumped off rocks. 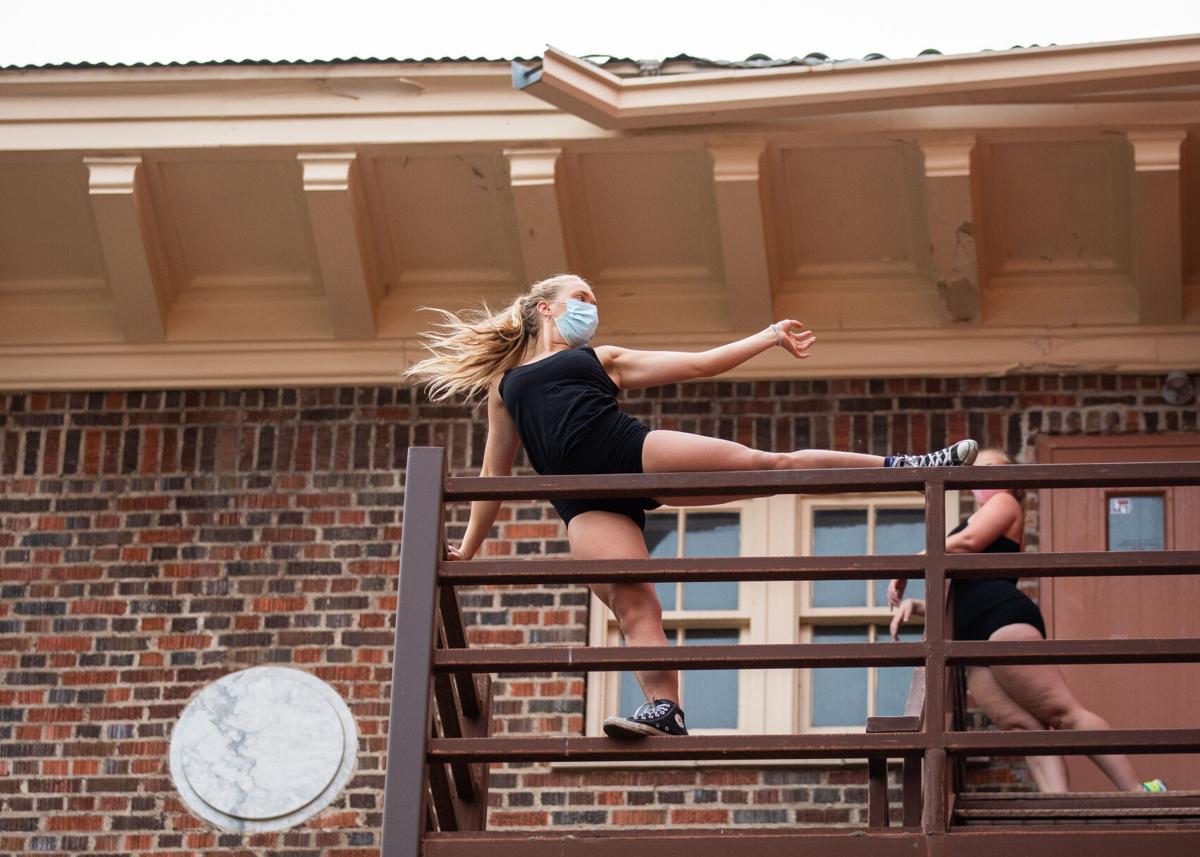 UM dancer Renee Ross dances at the top of the staircase during her group's piece, "Internal Scream." 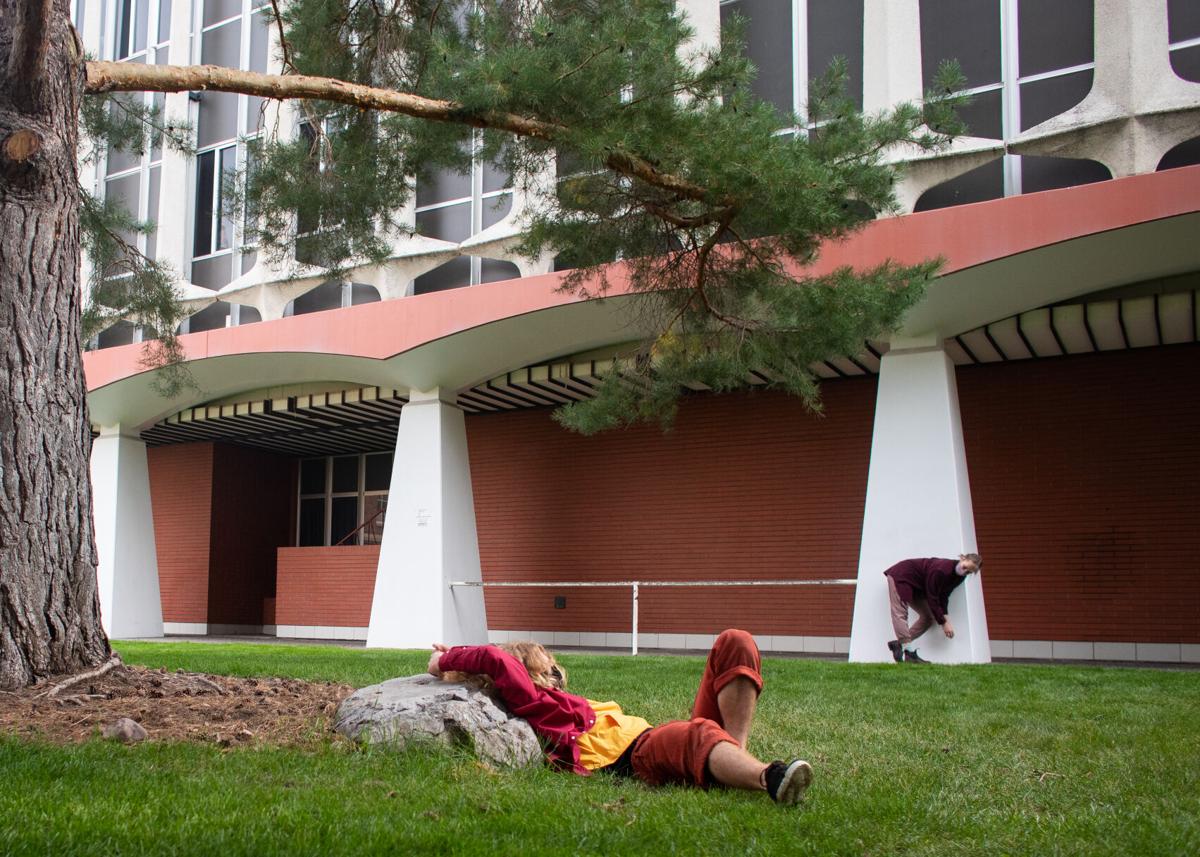 UM dancer Karter Bernhardt rolls on the group at the close of his dance,"Sanctuary," while co-choreographer Maeve Fahey dances in the background. 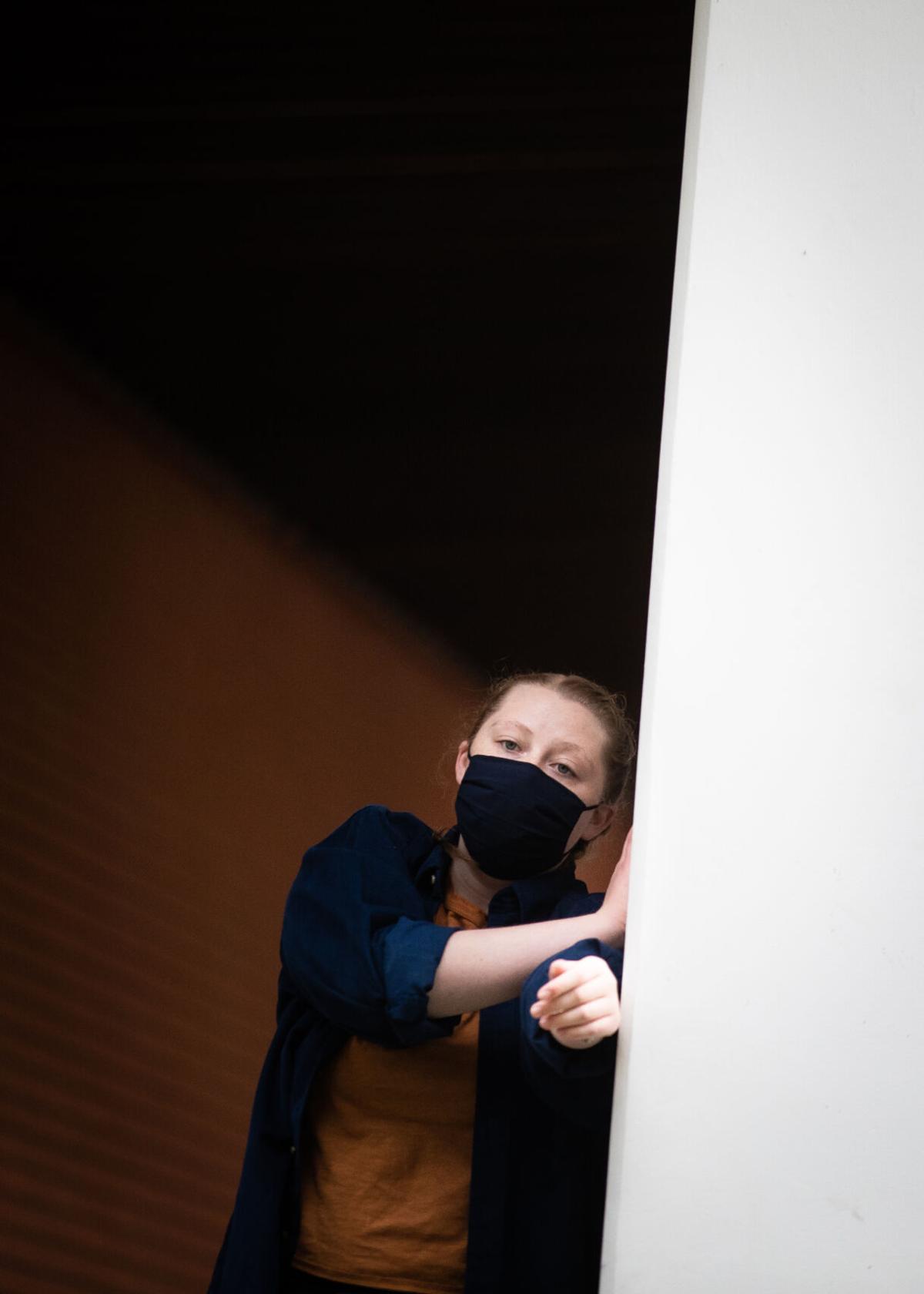 UM dancer Elisabeth Lundgren interacts with a column at the corner of the Clapp Building as part of her dance, "Sanctuary." 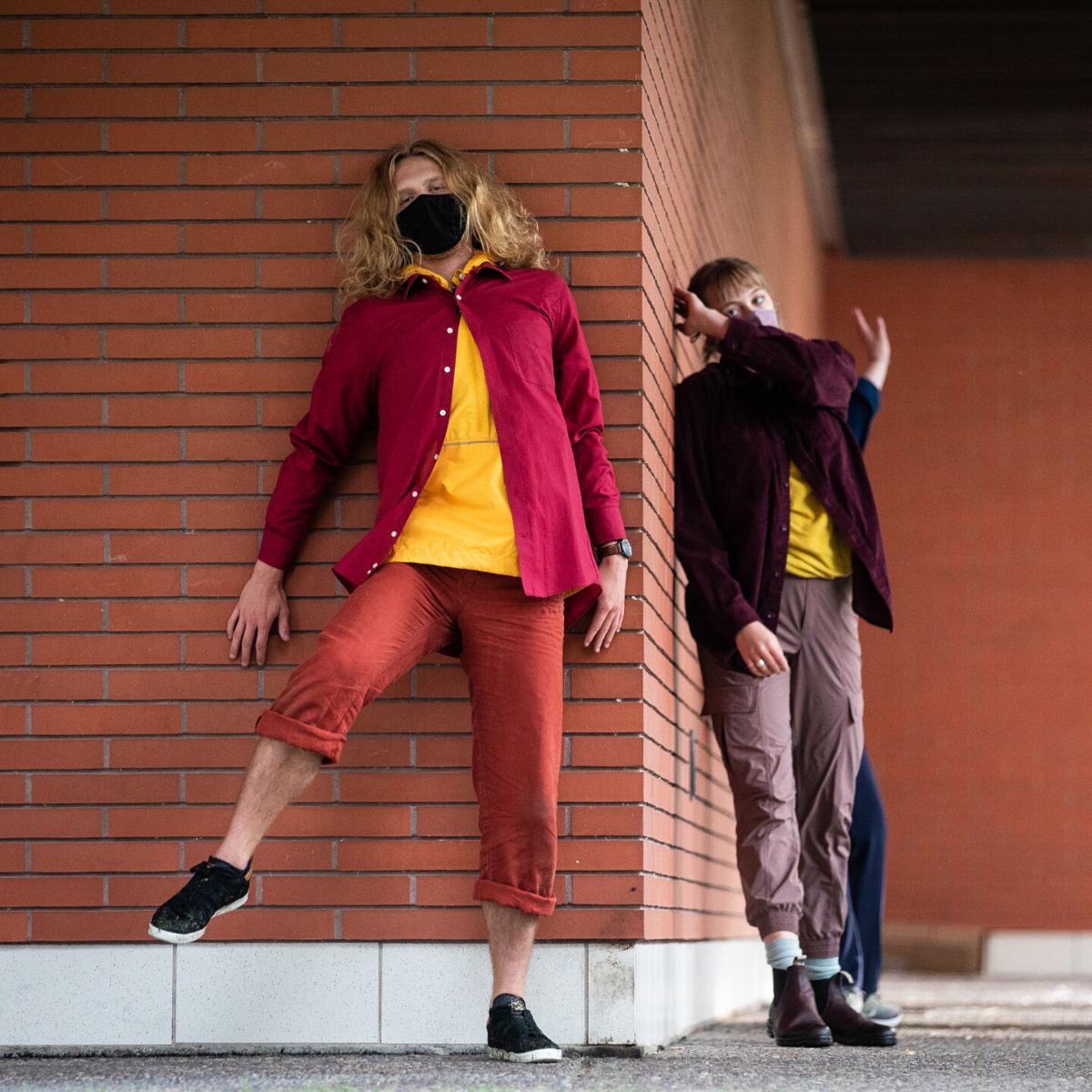 UM dancers Karter Bernhardt and Maeve Fahey use the orange brick wall of the Clapp Building to create a divide in their dance, "Sanctuary." 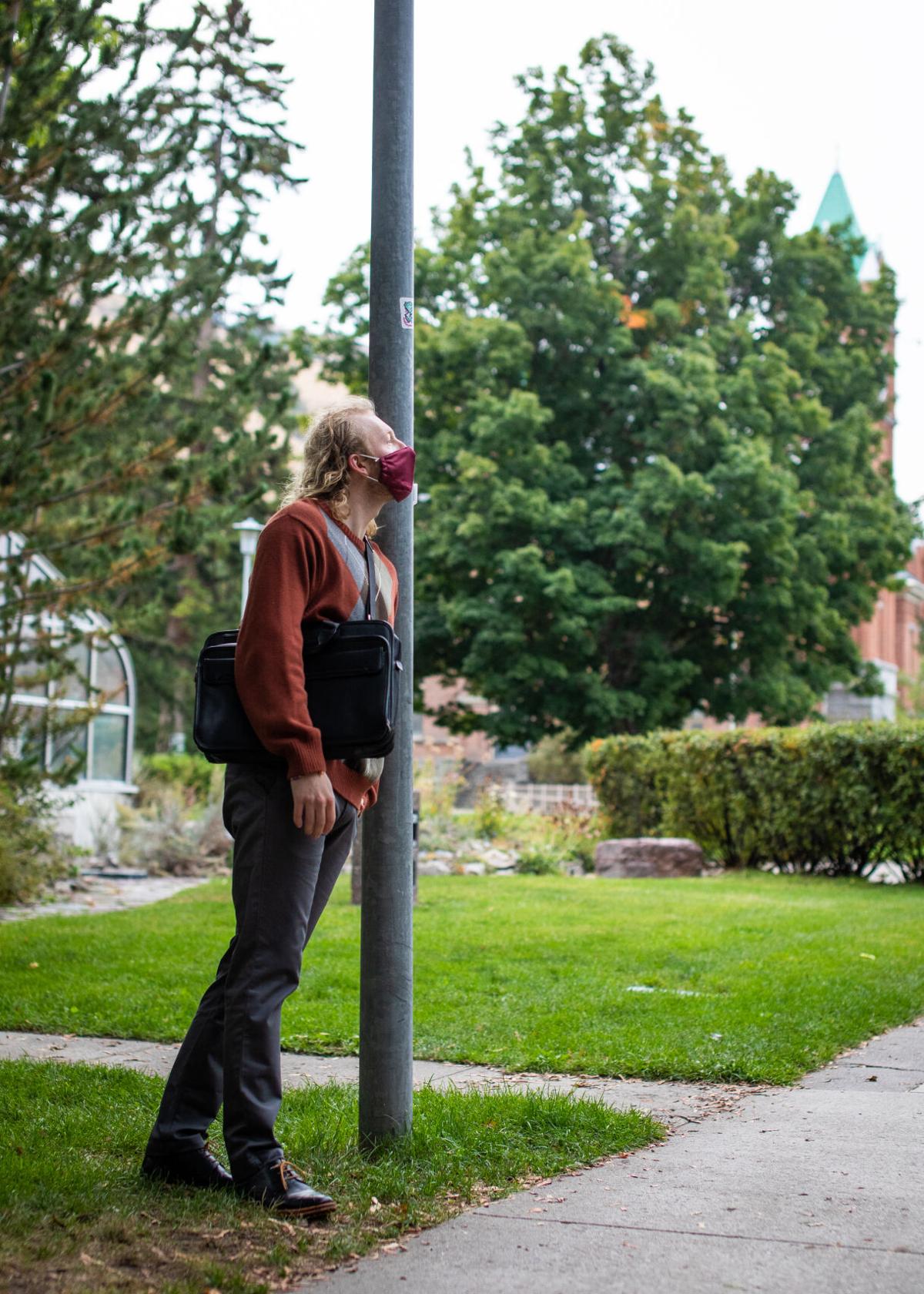 UM dancer Augustus Ballantine leans against a light pole near the Natural Sciences Building at the beginning of his dance, "Return." 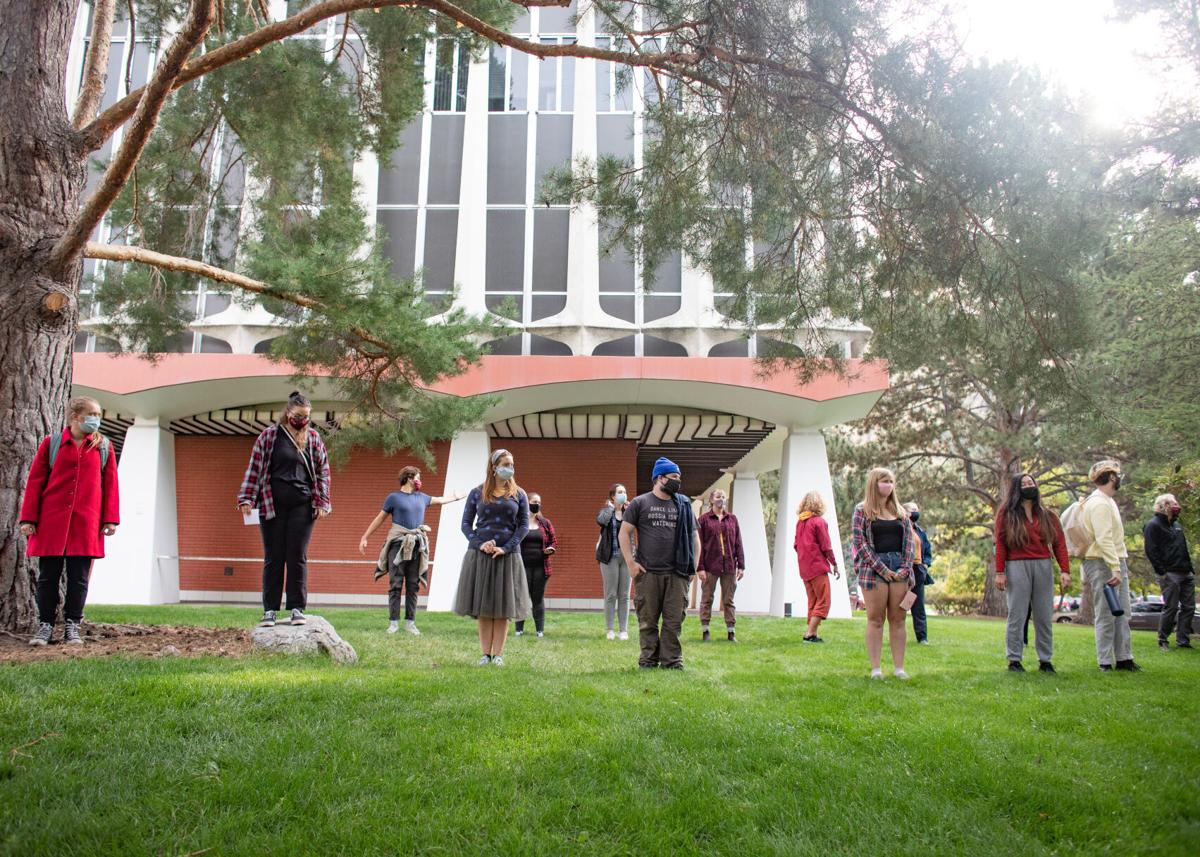 The UM Dance students in Creative Practice I take a bow after the final of five student choreographed dances. The performance, which runs on Thursday, Sept. 24, takes the audience across campus to lesser known, but interesting, corners where the dancers explore dance and its interaction with the environment.