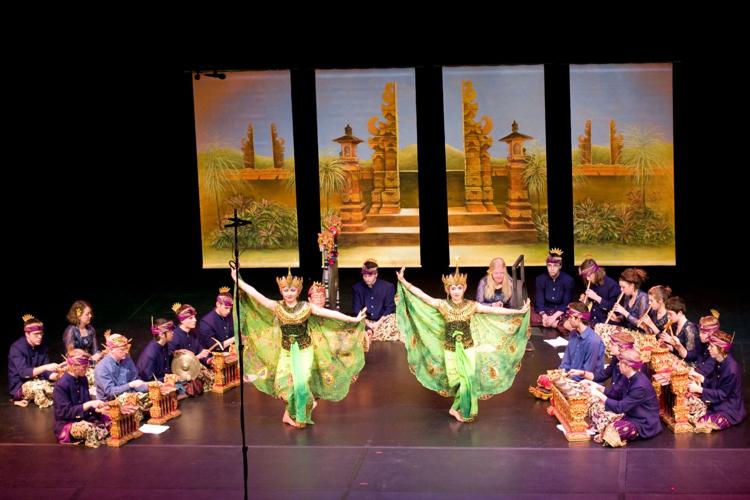 Dancers perform during a UM-sponsored Balinese Gamelan in Missoula in 2010.

Performers from a 2016 rendition of UM Balinese Gamelan.

Dancers perform during a UM-sponsored Balinese Gamelan in Missoula in 2010.

Performers from a 2016 rendition of UM Balinese Gamelan.

Bright green, gold and navy outfits will splash across the Dennison Theater on Sunday, April 3  for the 20th Anniversary Celebration of Balinese Gamelan in Missoula. Guest musicians and dancers will join the University of Montana’s celebration from Bali, Indonesia and feature alongside the Brazilian Ensemble and Salsa Band.

The performances will come from the UM World Rhythms Concert, an annual event hosted by UM’s school of music. The event aims to feature masterful artists from across the globe, like previously featured Edi Gbordzi from South Ghana. Some of these artists work directly with performers for a week before putting on their end of spring semester show.

This year, master musicians I Made Lasmawan and his son I Made Tangkas Ade Migaya join campus ensembles. Master dancers Gede Oka Artha Negara and Ni Ketut Marni will also come to perform alongside them.

Lasmawan is a drummer and composer from Bali, Indonesia who started UM’s gamelan. He usually returns to Missoula every two years to put on the World Rhythms Concert, but the pandemic put some projects on a years-long hiatus; some performers were eager to see Lasmawan in action again.

Robert LedBetter, the director of percussion studies at UM, said he is a charmingly stern character. LedBetter remembered Lasmawan saying “If you miss that note again, you’ll owe me $25.” While it’s worth a chuckle, it represented Lasmawan’s eagle-eye for errors and dynamic way of engaging his performers, LedBetter said.

Gamelans are traditional Indonesian orchestras that use plenty of percussion instruments, including bronze xylophones, drums and gongs. The UM Jaya Budaya is the Grizzly equivalent. Its title translates to “victory culture,” and they’ve performed for the Consulate General of Indonesia who visited Missoula to see them in 2010, according to UM’s world percussion ensemble page.

“It’s otherworldly,” LedBetter said. “It’s not like any music you’ve ever heard.”

The school sometimes sends music students to Bangah Village within Bali, where Lasmawan was born. There, the students rigorously study gamelan and Balinese culture for three weeks, and they are whisked away to important cultural landmarks like the Mother Temple, the holiest, largest and most important temple of Balinese Hinduism. They also perform for local events such as Hindu Temple Festivals and an elementary school graduation, the page said. The last Bali trip was in 2016.

The name came to Lasmawan, who is also involved in Manik Harum, during a full moon on Feb. 21, 2008. The gamelan has put on multiple performances around Missoula since its birth, and core members include the family of Marni, one of this year’s master dancers.

The celebration will happen at the Dennison Theater on April 3 at 7:30 p.m. Tickets are available on Griztix or by calling (406) 243-4051. The event can also be live streamed via a Griztix link.

Returning to school last fall felt like a reawakening.

One of my favorite jobs while working at the Montana Kaimin has been getting up a little earlier each Thursday to deliver our newspaper. For a college student being awake before sunrise, it ai…

The battle of the brands

UM is on the brink of a rebrand and will soon unveil its new colors, fonts and graphics. The Kaimin has seen the look — and we’re a house divided.

This interview has been edited for clarity. A condensed version can be found in the Kaimin’s print edition on campus and around Missoula, or in the PDF version on our website. Or, you can hear Bodnar in his own words on the Kaimin Cast wherever you get your podcasts.

There is a power to a person’s sense of smell. A single scent can stay with us or transport us back in time to memories we’ve almost forgotten. For Lily Gladstone, the smell of Missoula Children’s Theatre’s traveling costumes is like that — these articles of clothing that have lived their li…

The upcoming Associated Students of the University of Montana election comes with a number of candidates campaigning for change, after a year where candidates claim the senate’s bureaucracy got in the way of taking action.

Keeping the lights on

The University of Montana’s removal of the mask mandate in February was seen by many as a symbolic end to the COVID-19 pandemic that’s ravaged campus for the last two years. But the struggle — and the resilience — we’ve seen at UM over these years wasn’t for nothing. We’ve learned what it me…

Scott Blakney, a former University of Montana basketball player, is facing a big decision. Blakney just completed his last basketball season with UM, in which he only started four games and saw a first-round exit from the 2022 Big Sky Conference Tournament. Now he has to decide if he wants t…