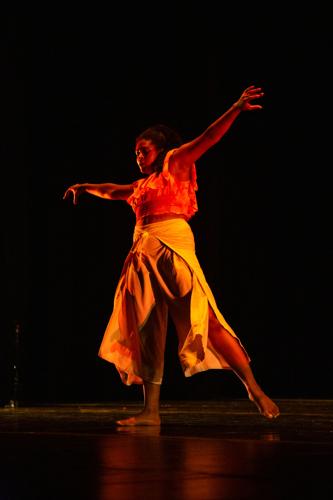 Bathed in golden and red studio light, UM dance and art student Julia Duarte performs her solo piece “Baianá” on a dark-lit stage as her energetic performance comes to a close on March 29. The event featured six choreographed pieces and is the first performance since 2019 to premiere at the Montana Theatre. 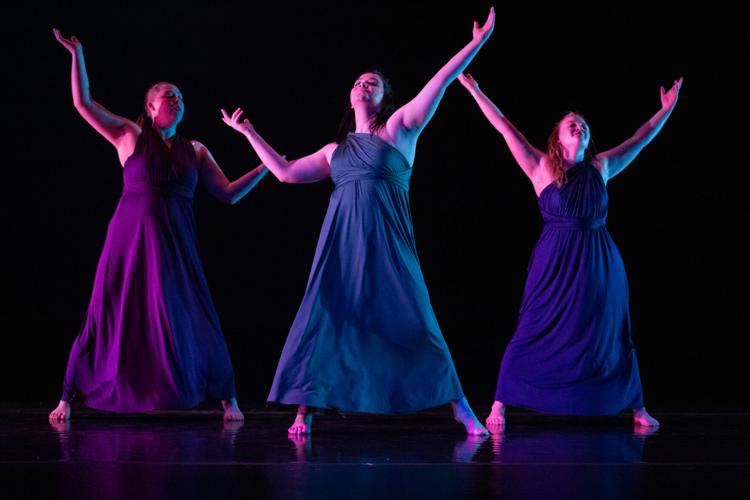 From left: Elle Lundgren, Hanna Dusek and Regan Tintzman begin their performance of “Biguished,” choreographed by Joy French on March 29th at the school of dance’s “Dance in Concert.” The event ran from March 31 through April 2.

With sweeping leaps, twirls and fast footwork, University of Montana dance and art student Julia Duarte filled the stage of the Montana Theatre with a performance grounded in her love for her home country Brazil.

“Baianá,” one of six pieces presented in UM’s school of dance and the only solo piece in “Dance in Concert,” draws inspiration from Afro-Brazilian movements, mixed with Duarte’s own style — a style she’s developed since she started dancing at 3 years old.

The concert ran from March 31 through April 2 and is the first performance since 2019 to premiere in UM’s Montana Theatre, which has a stage Duarte said she struggled to fill with her solo performance.

“When the stage is bigger it’s way harder to move from one spot to another so I have to use much more effort in my performance,” Duarte said. “Mostly, it’s making sure my presence as an artist and a dancer gets through to the audience.”

“I was guided by just the response of ‘I don’t know,’” said Georgia Littig, a senior B.A. dance choreography and performance candidate. “I got to know the people I was dancing with a lot more and I think that was possible because of the improvisational exercises.”

Draper is an assistant professor of dance and co-producer of the concert. She choreographed the piece “Remind Me of my Beginnings.” Draper said UM’s dance program prides itself on bringing in guest artists because students can get a perspective on different approaches to choreography, movement and teaching.

“Knowing how to generate movement is really important so that when students graduate, those who want to choreograph or dance have that experience of working with multiple people,” Draper said.

Beyond the dancers, lights and background commanded attention to the stage. This was particularly pertinent in Draper’s piece which used strobe lights, a dystopian-city background and electro music. Draper said the focus of the piece was to explore how the mechanized movement of the dystopian world we live in is rooted within the universe.

“Mountain Divide,” choreographed by UM adjunct professor Morrison, is a screen dance adaptation to the stage that features the recording of the grasslands, mountains, lakes and forests of the Anaconda Wilderness in southwest Montana. Morrison said she and other UM dancers went into the wilderness and created dances on sight.

When the environment changes, the dancer’s movements change with it.

“I’ve been developing a creative process of how experiences of place and movement can create and convey these experiences to audiences, so they can be transported to these places through the work,” Morrison said.

For a performance based on footage from the wilderness, Morrison said the Montana Theatre was key to transporting the audience to these places. She also said she’s just happy UM dance gets to perform in the theatre after over two years.

“Coming home to this performance space we haven’t been to in a long time is really exciting,” Morrison said. “This feels like a celebration of dance in this space that we love.”

Letter to the Editor

As Thanksgiving fast approaches this week individuals around the state and the nation prepare themselves for the torrent of debate on all political matters. However, this year I would ask each…

UM is in a losing accessibility battle

The University of Montana is misleading incoming students by saying it has an inclusive campus when there are many barriers keeping students with disabilities from moving freely on it.

UM’s reluctance to hire a cross country coach is unacceptable

A Division I athletic team should have a coach.

Skylar Tibbs, a freshman psychology major, attended her Montana history class Oct. 7 from the top of a set of stairs at the entrance of the basement lecture hall, right inside the door. Her professor led the class out of view on the other side.

A death at Aber Hall

Last week, presentations filled the classrooms of the Universty Center with topics like free speech to neurodiversity. The Kaimin covered several of the presentations. To read more about DiverseU, visit the extended story at montanakaimin.com.

THIS ELECTION, STUDENTS HAVE... SKIN IN THE GAME