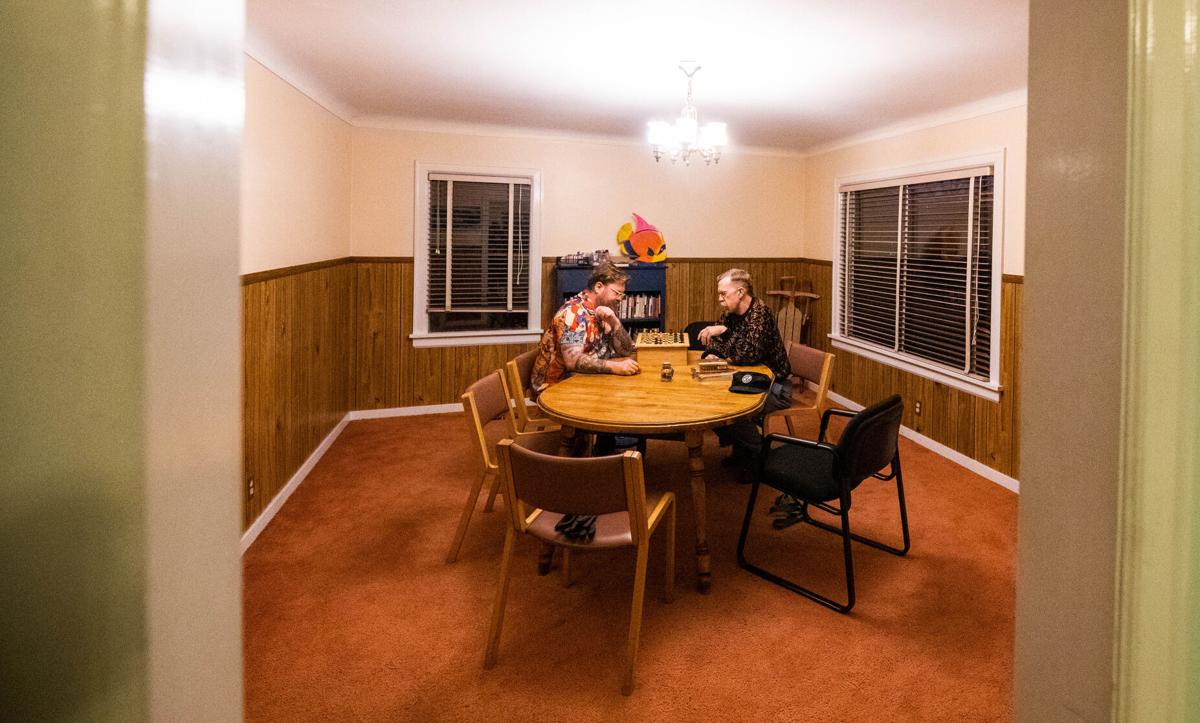 Kyle Verhorshek and Shane Rooney play a game of chess in Walnut Academy's dining room area after a long school day's work. The academy currently has four students, between the ages of 11 and 14, and two teachers, Rooney and Verhovshek, with experience working with neurodivergent children and working in the public school system. 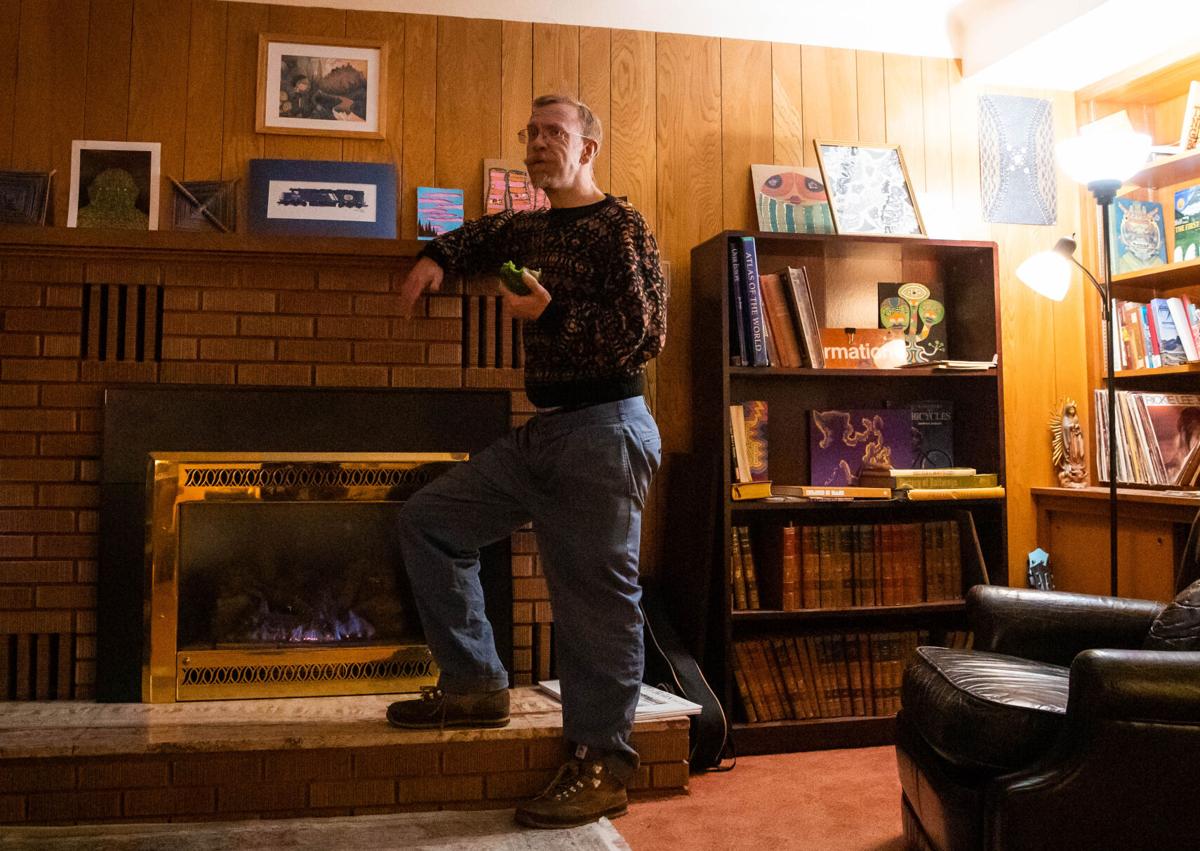 Shane Rooney, a teacher at Walnut Academy, eats a green bell pepper after students have left for the day on Dec. 2. Rooney had just changed clothes, asking his coworker Kyle which pants to wear with the sweater because "teacher" and a sweater equals "cool teacher."  The Walnut Academy wrapped up its first semester offering educational opportunities for neurodivergent students.

Kyle Verhorshek and Shane Rooney play a game of chess in Walnut Academy's dining room area after a long school day's work. The academy currently has four students, between the ages of 11 and 14, and two teachers, Rooney and Verhovshek, with experience working with neurodivergent children and working in the public school system.

Shane Rooney, a teacher at Walnut Academy, eats a green bell pepper after students have left for the day on Dec. 2. Rooney had just changed clothes, asking his coworker Kyle which pants to wear with the sweater because "teacher" and a sweater equals "cool teacher."  The Walnut Academy wrapped up its first semester offering educational opportunities for neurodivergent students.

Just west of Orange Street, nestled in the suburbs of Missoula, sits a three-bedroom house that looks like any other. In the living room, there’s an orange shag carpet and a fireplace. A baby blue kitchen features a fridge covered in drawings and collages, stocked with food and snacks. In the back, a garage has an open space perfect for stretching and dancing. The Walnut Academy, however, is no house at all, but a fully-functioning school pioneering a new kind of alternative education.

In Missoula, a new kind of school is emerging. Walnut Academy, on Walnut and Sixth Street, is wrapping up its first semester for the four neurodivergent students enrolled, and it’s been a massive success.

The academy was brought to life by Gail and Tom Bourguignon, presidents of the school’s nonprofit board. Gail studied counseling and law at Northern Arizona University and Michigan State University respectively, and is now a Standing Master of the Fourth Judicial Court of Missoula.

“The idea is that we want to provide an educational opportunity for kids for whom traditional classroom settings don’t work well,” Gail said.

The concept began in the Bourguignons’ backyard. They realized their 14-year-old son, whois autistic, wasn’t learning to his full potential in public school and wanted to learn in a way that fit his needs.

During the beginning of the pandemic, their friends hosted a “tent school” for children who couldn’t keep up with online classes and this idea of alternative learning sparked the outline for their academy now.

Today, Walnut Academy has four students, between the ages of 11 and 15, and two teachers, Shane Rooney and Kyle Verhovshek, who both have experience working with neurodivergent children and working in the public school system.

Though not an officially accredited institution, Walnut has partnered with other accredited schools, eNDVR and Aspire Middle and High School, that have agreed to give students who complete their education at Walnut official degrees.

Class runs from 9 a.m. to 5 p.m. and welcomes students from other schools to join them from 2 p.m. to 5 p.m. The school is funded by grants and tuition fees, although scholarships are in place and the Bourguignons are hopeful they will become bigger once more funding flows into the institution.

“We don't have a product that we sort of pitch to sell to families,” Gail said. “The families are just as much the owners of this process and of the school as we are. They guide everything from policy development to choices about what the students want to engage in, and it's all spearheaded by the students.”

The Walnut families meet at least once a month, on a Wednesday, to discuss how things have been going and to decide on what they might want to focus on for the coming month. In the end, though, it depends on the students.

“A day looks like whatever [the students] want it to look like,” Verhovshek said. “The general day looks like individualized exploration, and whatever support we can give them to make that happen so they can fulfill their personal dreams.”

In addition to lessons in reading, comprehension and math, some common activities that make up the week are trips to the library and parks, swimming at Currents Aquatic Center, biking to FreeCycles, walking to Orange Street Food Farm (where the students pick out groceries to cook for their lunches) and exploring local institutions of faith and the cultures within.

Caireny Abbe is the mother of a 15-year-old boy, who was born prematurely after only 24 weeks. Because of related conditions, Abbe’s son has struggled to keep up with the public school system’s methods of teaching. When she heard about the academy, Abbe joined during its formation process.

“I was a little skeptical going into this,” Abbe said. “I didn't know what to expect. I feel like [my son] is actually socializing more, rather than just sitting in the classroom all day doing paperwork. They’re being really creative with them … He has such confidence after just three months at the school.”

As time goes on, the teachers hope for the academy to further establish itself in the community rather than simply grow in numbers.

“My hope for it isn't necessarily centered around growth,” Verhovshek said. “We have four kids. We would love some more, but growth in my mind doesn't look like a bigger Walnut. It looks like a more complete child. Like a more complete community … Hopefully we can find more kids who are the ones who need it, because I know that they're out there right now.”

As guidance changes, UM has a responsibility to adapt

Through the good and the bad, you showed up

As the semester comes to a close, the Kaimin is reflecting on what a crazy ride it’s been. Last week, we published a photo essay detailing the resurgence of an in-person campus. We included ph…

The factors that led Menodora LeMaster from Kansas to the University of Montana happened by chance. She bounced around, living in Portland and Japan and finally settling in Missoula, enrolling at UM to study languages in the College of Humanities and Sciences. Now, like many at UM’s largest …

Danny Brinkley, a 41-year-old UM senior, maneuvered his motorized wheelchair around the hardwood floor in his living room, stopping for a moment to admire his saltwater fish tank before settling in the center of the room with his dog Nessa at his side.