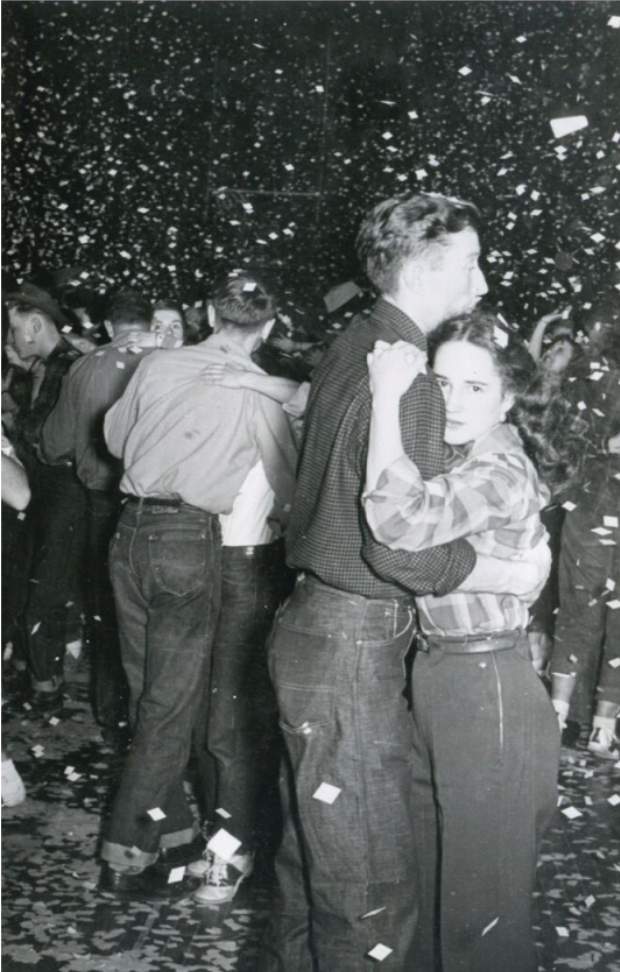 A little over a year ago, crowds of people flocked to UM on an early spring night dressed in their finest flannels, dirtiest Carhartts and most obnoxious cowboy hats for the 103rd annual Foresters’ Ball.

This year, the ball did not happen. Spring 2021 will mark just the second time the Foresters’ Ball has had to be canceled since its establishment in 1915.

The first time was during World War II.

And with the pandemic slowly loosening its grip on life, one reality still looms large: Traditions, new or over a century old, will have to wait. However, despite the disappointment expressed across Missoula at the cancellation of the Foresters’ Ball, the forestry community at UM is hopeful for the future and is finding COVID-safe ways to make their community known around campus and Missoula.

The Foresters’ Ball is a collaborative effort among the Forestry Club, the Student Recreation Association and the Woodsman Team. The groups come together to transform Schreiber Gym at UM into a town out of wood over months of preparation. The scrap they use would likely be trashed or left to rot if not for the second life that the ball allows.

“We’re definitely bummed about it, it’s the biggest event for us. When you can’t do it, it kind of makes the year feel wasted,” said Brock Welte, safety officer of the ball and Woodsman Team captain.

Welte said the best part of the ball is to get together with people from the groups involved in the process, and even people who just want to hang out and be a part of a tradition that’s lasted over a century. The ball goes beyond just a social event — there’s money at stake. It’s a chance to provide scholarships to students at UM who were involved with the event.

“The Foresters’ Ball takes a lot of money to put on, but we get a ton of businesses to donate time, money and materials to us,” Welte said. “That allows us to make a profit off it, and all the profit goes to scholarships for students in the forestry program.”

The forestry community’s goal is to keep the ball rolling next year (pun intended) and provide scholarships to students to keep their education going. In the meantime, the Woodsman Team is still holding meetings in Fort Missoula, instead of on-campus, because it allows them to stay distant outdoors.

“It’s so that people have an excuse to go outside, because right now it’s hard to get out of the house,” Welte said.

Priya Keller, publicity officer for the Foresters’ Ball, said the forestry community is more supportive and active than ever before.

Though all the profits of the Foresters’ Ball are put toward paying for scholarships for forestry students and compensating people involved in putting on the event, everyone involved decided to not hold any large fundraising events this year thanks to the economic toll of the pandemic. However, they found people were more inclined than ever to donate this year to keep the scholarships going.

“There was a lot of community support — especially alumni asking, ‘how can I support [the ball]?,’ and so we decided to start selling old merchandise to raise money for next year’s ball,” Keller said.

Keller said with the changes happening because of COVID-19, she thinks they are seeing a new generation of forestry students enrolling, and that the program has a chance to promote amazing sustainable forestry nationwide.

“With the pandemic, now we can see we have this big opportunity for the next ball to showcase how healthy and sustainable forestry is, which is something I think we need to do,” Keller said.

Keller said the ball is necessary to demonstrate the importance of forestry to other UM majors and the larger Missoula community — both in Montana and nationwide.

“There is a lot of misconception about forestry — we are actually really sustainable in the ways that we work with trees — and that we can continue this thing that is much more reusable than plastic,” Keller laughed.

Keller said that the forestry community is already working hard to keep pace for next year, but for now, they encourage people to get involved with forestry and be a part of the clubs.

“We always love new faces and new people coming over and sticking around with us,” Keller said. “We have been doing events that are inclusive to everybody and all majors that show up.”

With football returning to the University of Montana on April 10, the Griz can try to break any individual, team, conference or national record possible without any consequence.

Mass vaccination is critical, and UM stepped up

We’ve stood in lines outside of the Adams Center so many times while we’ve been students. Basketball games in February, a volleyball match on a Friday evening — even slightly drunk waiting to …

Editor's Note: On March 16, Gov. Greg Gianforte announced that all Montana residents over age 16 will be eligible for a COVID-19 vaccine starting April 1.