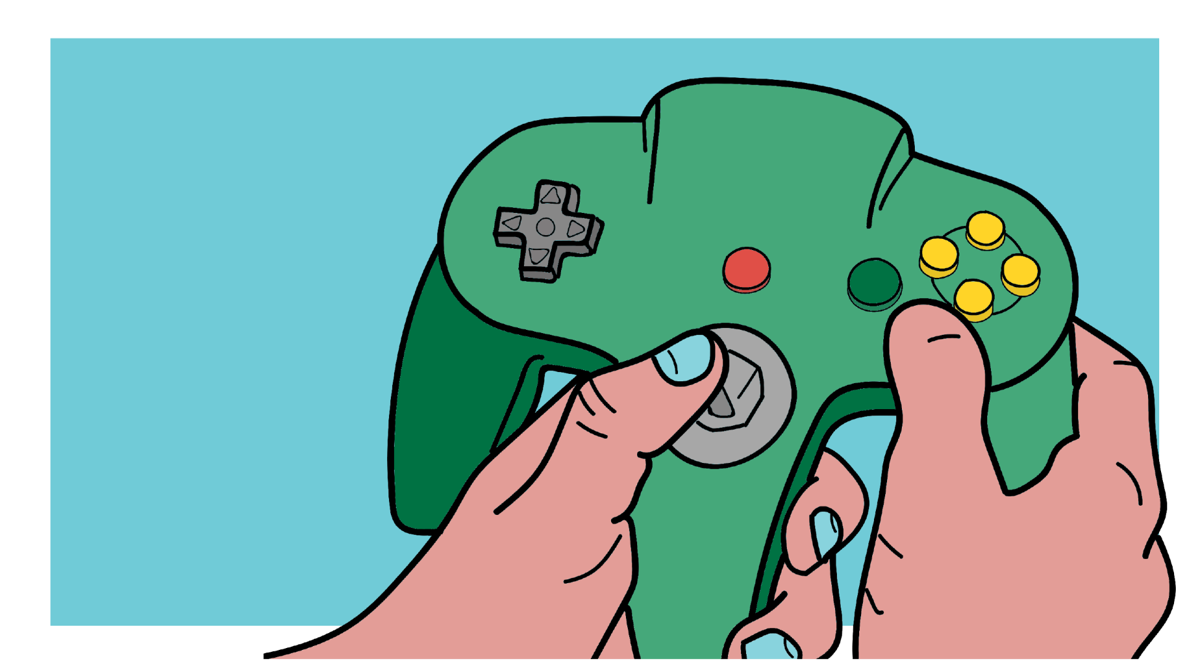 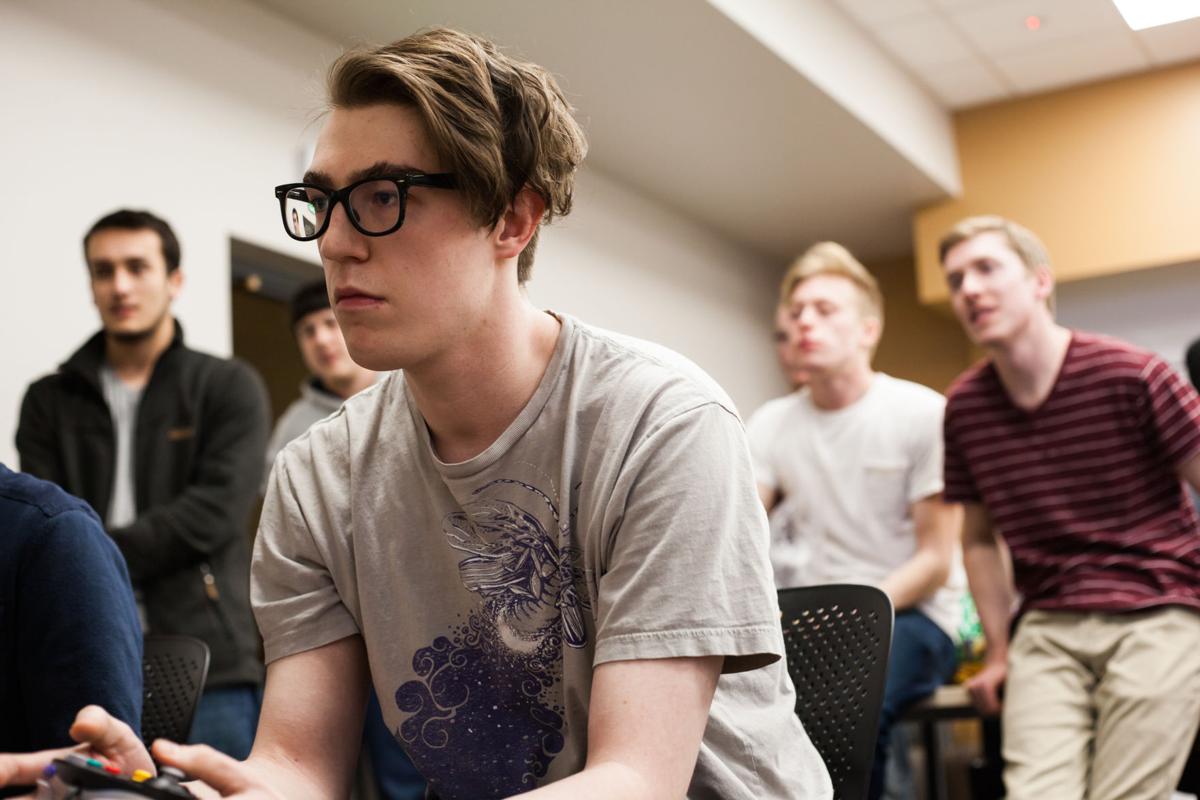 Joe Smith gears up for a practice round while club members look on. Smith helped popularize competitive Smash in Missoula. 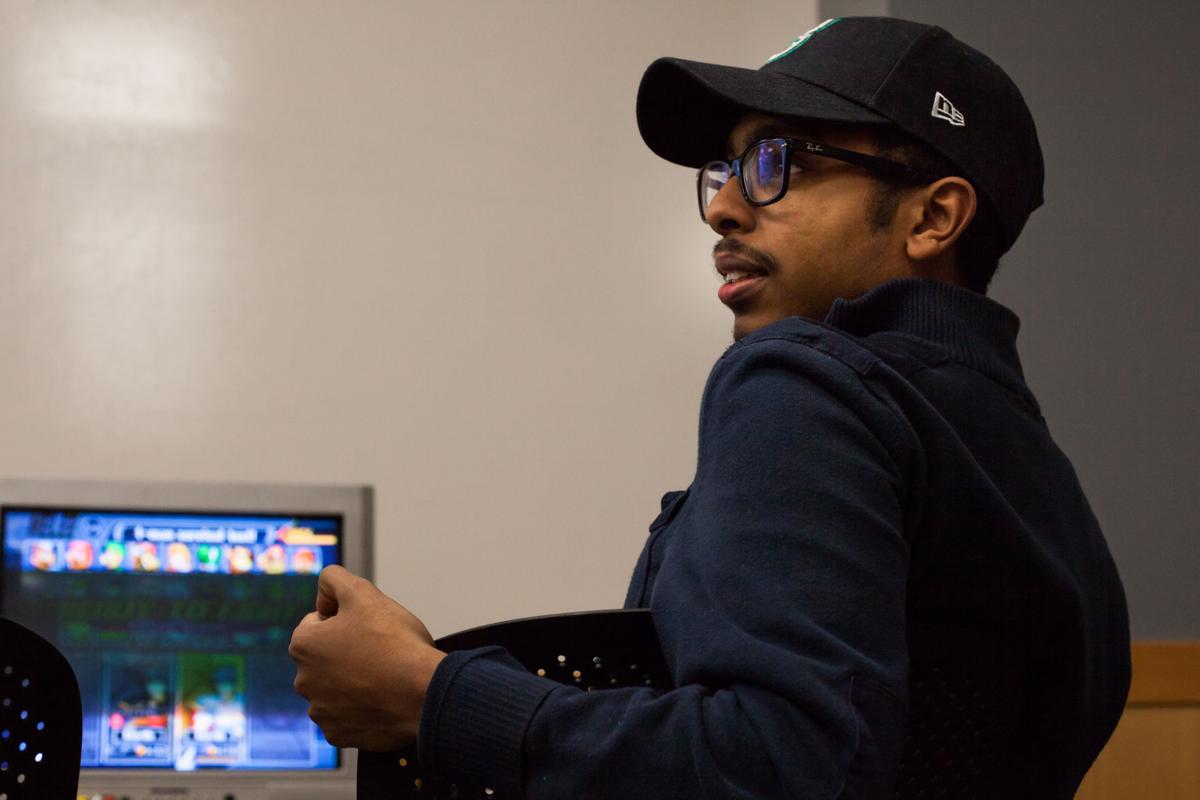 Dawit Mengistu glances at the matches going on around the club's meeting room. Mengistu got involved in the Smash Bros. community after sustaining a track injury.

Dawit Mengistu paused and looked up at the ceiling, then burst into laughter.

“Okay, maybe not to that extent.”

Fifteen people were crowded around five television sets, each of them clutching their own purple GameCube controller. Some even had customized controllers.

“Your controller is important. It’s like an archer’s bow,” Mengistu said.

A clicking sound filled the room as their thumbs twitched at rapid-fire speed. Sometimes they would yell at each other as if they were watching a sports event. Sometimes they chatted casually. Sometimes the room was almost silent, except for the sound of the controllers and the faint whooshing sound effects from the game.

This is Smash Club.

“Besides ‘Smash,’ I don’t play video games. It’s the community that I love. The community is something special. Also, it’s that feeling you get when you’re playing,” Mengistu says,“I get an adrenaline high. I get so pumped.”

Missoula’s Smash Club is group of mostly UM students, but also a few people who have graduated and just appreciate having a place to get together to practice the popular 2001 Nintendo game “Super Smash Bros. Melee.” They gather in basements, bedrooms, classrooms and tournaments. Sometimes it’s a friendly match over a few beers, but it’s often something more personal. It’s a chance to showcase the hours of practice they put into perfecting their moves.

“‘Melee’ is fun for everyone. It’s fun for the person who has just tried the game, and it’s fun if you’ve been playing for 15 years just because there is so much depth. Like, it’s actually gross, the amount of things you can do,” Mengistu says.

For a game whose fighting roster includes a pink puff ball named Jigglypuff, “Super Smash Bros. Melee” is complex. It is sort of an anomaly in the worldwide fighting game community. Nintendo originally marketed and designed Super Smash Bros. as a casual party game. Something for kids. But shortly after it came out, fans discovered that there were an array of glitches in the game’s design and you can use those glitches to your advantage.

“Most fighting games are designed like rock, paper, scissors. Attacks beat throws, throws beat blocking and blocking beats attacking. But with these glitches you can basically get a much stronger rock and that adds a whole new layer to the game,” said Joseph Smith, one of the first people to bring a competitive “Smash” scene to Missoula.

This, combined with the game’s unique goal of pushing your opponent off a stage instead of simply killing them, opened up a Pandora’s box of potential strategies. The game was perfect for serious competitors to step in.

“What’s great about ‘Melee’ is that you can’t beat it. No matter how much you practice, you can always get better,” said Dylan Budke, who has been playing “Melee” for years, but only recently started attending the club.

The game’s creator, Masahiro Sakurai, realized that there was a growing gap between party smash players and competitive smash experts. He didn’t want players to feel that the game was something that players should spend years of their lives mastering. Sakurai decided to remove all glitches from the next version of the game in 2008. But it was too late and the cult around “Melee” was snowballing.

“He’s probably thinking, ‘The nerds are taking over! We’ve got to shut this down,’” Mengistu said of Sakurai.

In 2011, Smith, 24, discovered Competitive Smash in Las Vegas and decided to bring it back to his home in Missoula.

He traveled to Vegas for the Evolution Championship series, the biggest fighting game championship in the world.

At Evo tournaments, screaming fans gather in an indoor arena, some of them with noisemakers, like at a sporting event. Smith was there to play the traditional fighting game, “Street Fighter.” After he was eliminated, he stuck around to watch finalists compete in their respective games.

But Smith saw something he didn’t expect. “Super Smash Bros. Melee” was on the big stage. This was a game he used to play when he was a kid. Fans screamed as colorful characters flew across the arena in rapid-fire.

“I was thinking ‘Holy crap, this game is bananas compared to everything else that’s going on,’” Smith said.

He watched as a famous “Smash” player won using a glitch in the unpopular character, Ice Climbers.

Back at his house, Smith researched the “Melee” Ice Climbers. He found out that the “Melee” community actually considered it a bad character. Nevertheless, this finalist at Evo discovered a glitch that could make Ice Climbers unbeatable. Today, that move is legendary, albeit controversial, in the “Smash” community. It’s called “wobbling.”

“I never realized that there was this deeper level to the game. That it can be so measured and competitive,” he said.

Suddenly, Smith was seeing the game in a whole new light, and he decided to start taking “Super Smash Bros.” seriously.

At that point, it had been a decade since Melee was released, and the game was hard to get a hold of. Smith eventually got his hands on copy, bought an original GameCube console online, and started practicing. He would invite people to practice at his house and Missoula’s “Smash” community was born.

It started out small and exclusive. Smith would invite a few guys over to his place to play. They would discuss strategies and techniques. They’d practice against each other for hours on end, with the goal of eventually going to tournaments. Smith and a few other serious players wanted to blow away an audience, like the guy playing Ice Climbers did.

“My first ‘Melee’ tournament was one that Joe actually hosted at his house. People from Bozeman came and they were so much better than everyone in Missoula,” Chris Albert said.

After a few years of intense practice, though, Smith decided he was tired of it all. He stopped competing in tournaments. He couldn’t explain why, but he felt that competitive “Smash” was losing its appeal.

Little by little, the community fizzled out. People weren’t getting together to practice as much as they used to, and Bozeman continued to clobber Missoula in statewide tournaments.

Smash Club did not exist yet. The competitive “Smash” community in Missoula had only ever lived in people’s basements.

Katie Guy was just discovering the huge competitive community that existed around her favorite video game. She knew that there was a “Smash” community in Missoula, but she mostly practiced for tournaments on her own. Katie preferred a version of the game that was released after “Melee” called “Smash 4,” which has a much smaller following. “Smash 4” is a lot like “Melee,” but it doesn’t have the glitches that “Melee” players love. Katie said “Smash 4” is more about skill and learning how to use the characters as they were designed to be used.

“My main problem with ‘Melee’ is that it’s a really old game and it’s full of glitches. Really, the only way to win is by exploiting those glitches. I think that’s kind of dumb,” Guy said.

Guy fell in love with “Smash 4.” She wanted to join the competitive scene but she didn’t know many people she could practice with. The “Smash” community in Missoula only existed for “Melee” players.

She teamed up with another player, Zac Raasch, and they decided to set up an official Smash club through ASUM, where people who played all versions of the game could get together and practice at a consistent time. The club opened the door for anyone who was curious to join the Smash community.

It was Guy’s and Mengistu’s passion for the “Smash” community that brought Missoula “Smash” back to life.

Mengistu is the treasurer of Smash Club and one of the main event organizers, but he wasn’t always a Smasher. He has only been playing for the last two years.

He came to Missoula as a track athlete, but he quickly found himself injured, with nothing to occupy his time.

While he waited for his injury to heal, he contemplated transferring to another school, but then he saw a flier for Smash Club.

“When I first heard about it, I was baffled,” he said. “I was like ‘Man, these are some nerds. This isn’t a sport. What are you guys doing?’”

Even so, he showed up. He brought the wrong type of controller and lost to almost everyone he played against. But Mengistu was hooked by the community he saw that day. The 19-year-old athlete did not expect to make close friends in a classroom filled with people playing video games, but he did.

“In the Smash community I’m not thinking about what major I’m in or that I am a track athlete or even that I’m a black guy,” Mengistu said. “I’m just a dude who is playing Marth. I’m Marth. I swear, that’s all they’ll judge you on is which character you picked to play. That feels pretty great.”

Over time, Mengistu became an active member of the Smash Community. Now he regularly schedules events.

He organized a tournament called “Smash for the Station”. It was a fundraiser for KBGA and he wanted it to be a turning point for the “Smash” community.

Thirty-one people showed up to play, including folks from Helena and Bozeman, making it the largest Missoula “Smash” tournament yet. Even Smith attended and played.

“To be honest, seeing everyone come out has kind of pulled me back into it,” he said. “I love seeing how many fresh new faces there are and how good everyone has gotten.”

Chris Albert found out that he would be playing against his “Smash” nemesis, Richie Schoessler from Bozeman. For the first time in his “Smash” career, Albert beat Schoessler and got second place in the tournament. He won $45.

“I was playing out of my mind,” Albert said. “That was my first time actually feeling tournament winnings in my hands. I was like ‘Oh shit! Money!’”

Missoula players took home first, second and third place in the “Smash” for the Station Tournament. It was the first time Missoula had ever beat Bozeman in a state-level tournament.

“The tournament was like an awakening for Missoula’s ‘Smash’ scene,” Albert said.

It has been 16 years since “Super Smash Bros. Melee” was released, but today, Missoula’s “Smash” community is at its strongest.

Guy and Mengistu believe their newfound success can be attributed to the tight friendships they have formed within the community.

“I've always been an awkward introvert and had a hard time making friends,” Guy said. “I really wanted to create a space where people with this obscure interest could come together and make new friends. I have met loads of people I wouldn't have met otherwise, and I've seen a lot of people creating friendships. So I think that Smash Club is a huge success.”