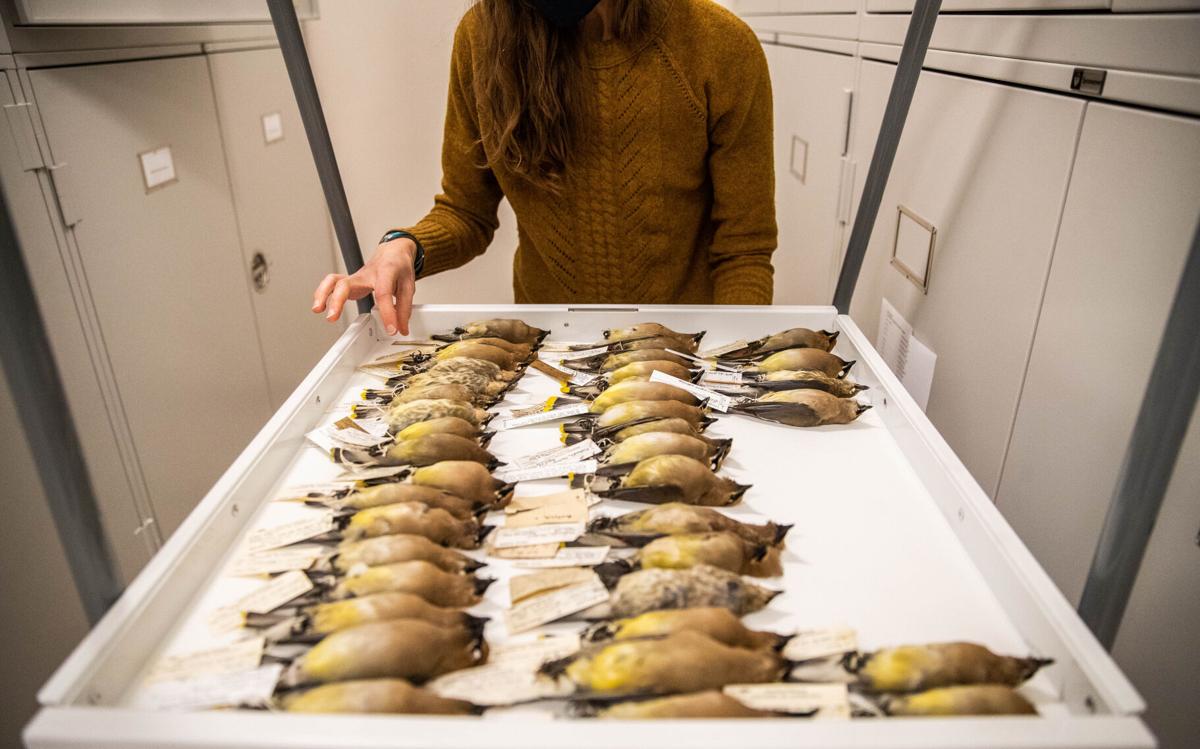 The museum has a collection of cedar wax wings, which are birds that eat fermented berries in anticipation for migration which get the birds drunk and make them fly into windows. 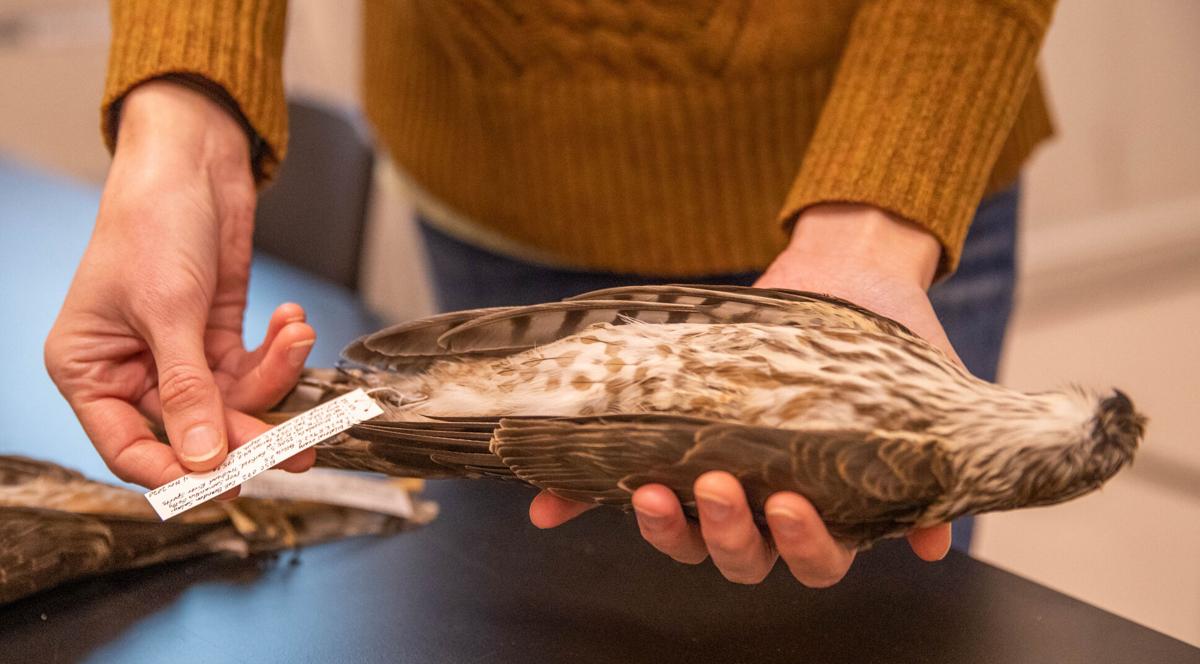 Hornsby holds a the carcass of a sharp shinned hawk, a bird that commonly strikes windows while chasing small songbirds. Hornsby said she receives about five to 10 bird specimens from campus window strikes each year. 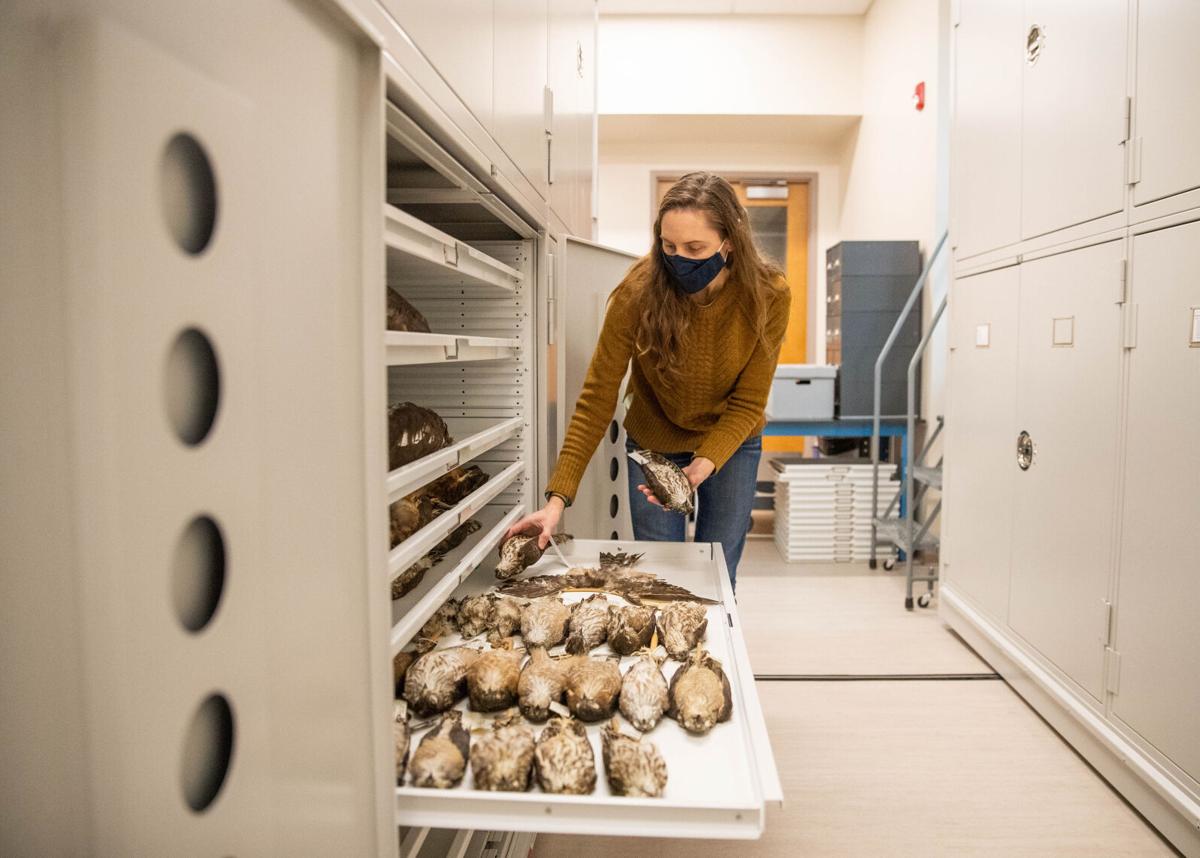 Angela Hornsby, a curator at the Philip L Right Zoology Museum at the University of Montana, opens shelves filled with a year's collection of bird specimens, Dec. 8th. Many of the birds in the collection died after colliding into a windows campus.

Angela Hornsby opened a drawer full of dead bird carcasses and pulled out a small, gray bird. It was missing its eyeballs and had a popsicle-type stick coming out of its body to keep it sturdy.  A half sheet of paper contains everything she knows about this bird: the species, gender, length, weight, beak size, the exact coordinates where its body was found and when it was received.

This bird, like many of her specimens, died colliding into a window. Someone then reported it to the Philip L Right Zoology Museum at the University of Montana. Hornsby, the curator, receives about five to 10 bird specimens from campus window strikes each year, but she knows the number of deaths is much higher.

Bird collisions with windows emerged as a major human-caused threat to North American birds. A 2014 study by the American Ornithological Society estimated up to one billion birds die annually because of window strikes in the United States.

Birds cannot recognize glass barriers. They believe they are flying into a reflection of the sky or an open entryway.

According to Hornsby, the number of bird strikes on campus may become a problem if the University continues to design window-heavy buildings. The University Center has proposed a renovation of the building paneled almost entirely by windows within the next decade. When Hornsby saw the design she thought, “that’s really beautiful, and it’s going to take down a lot of birds!”

As infrastructure development across the country continues, so will the number of bird window-strike casualties. UM is no exception. Some species that are more susceptible to window strikes might even be experiencing population threats because of it.

“At UM there are several buildings that are very dangerous for migrating birds: Skaggs, the UC and several others,” said Erik Greene, director of UM’s bird biology lab. “During spring and fall migration I collect too many dead birds under these windows.”

He is also disappointed in the “environmental design” of the library. “I have had limited success convincing UM to get serious about this issue,” Greene said.

Marissa Italiano, a UM student studying biology, ecology and organismal biology, was walking into her dorm room at Miller Hall earlier this year when she saw something bright and orange on the ground. What first appeared to be a piece of trash turned out to be a Northern Flicker whose neck snapped in an apparent window collision.

Italiano is a student volunteer at the zoology museum, so she knew to report the body to Hornsby. It is illegal under the Migration Bird Treaty Act for citizens to move or displace bird carcasses, but if they are being used for research at the museum, Hornsby can collect them.

Once collected, museum volunteers spend several hours skinning the birds, removing the skeleton, eyeballs, bones, organs and tissues. They comb the birds for parasites and enter their findings into an online database.

The information is used over time to study species and look for trends. The Field Museum of Natural History in Chicago has been collecting bird strike victims since the 1970s. Researchers looking at their collection have discovered groundbreaking changes, like how some bird species are shrinking in size, likely in response to climate change.

“The benefit of taking these birds is that it is building an opportunity for us to ask questions,” Hornsby said.

If students experience a bird collision on campus or at their home, they are encouraged to contact the Philip L. Right Zoology Museum through their online contact page to be taken in for research.

Crime’s back, and it’s … stealing tools?

Marshall Law: What the hell happened to basketball’s student section?

Griz Hockey gets win over MSU in throwback uniforms