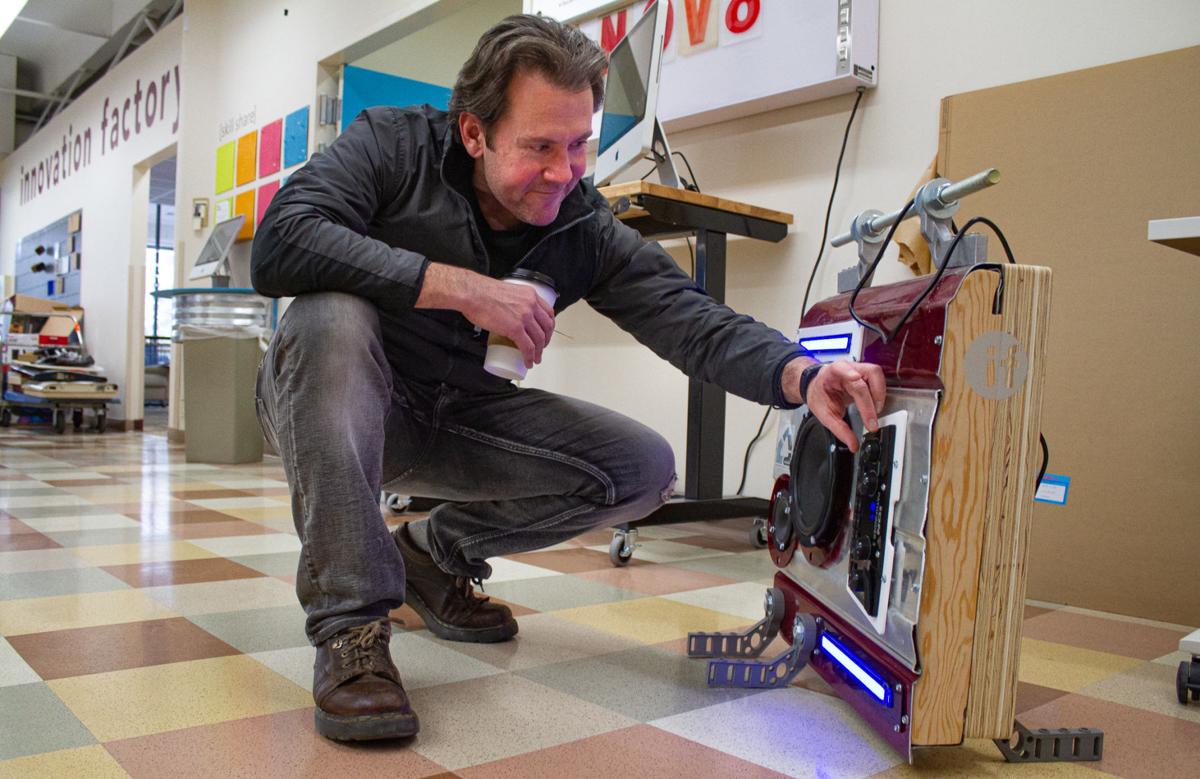 Co-director of Innovation Factory Brad Allen adjusts the volume on a homemade boom box at the Innovation Factory's opening, Monday, Oct. 28, 2019. Located on the University Center's second floor, the Factory is a communal space for studying and engineering projects. Students and Missoulians can achieve badges in 3D printing as well as other engineering tasks at the space. 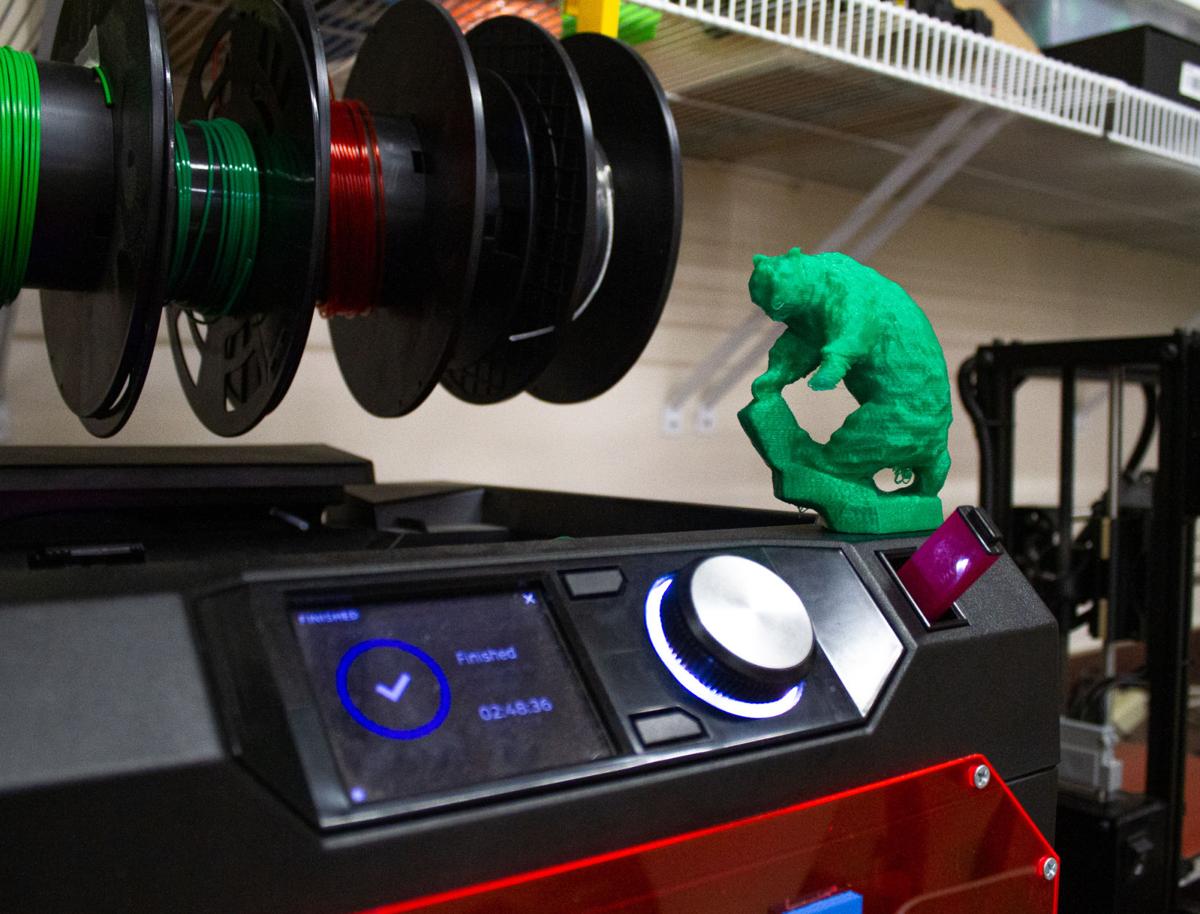 A 3D-printed green plastic replica of the University of Montana's grizzly bear statue. The replica was created from one of the space's 3D printers. 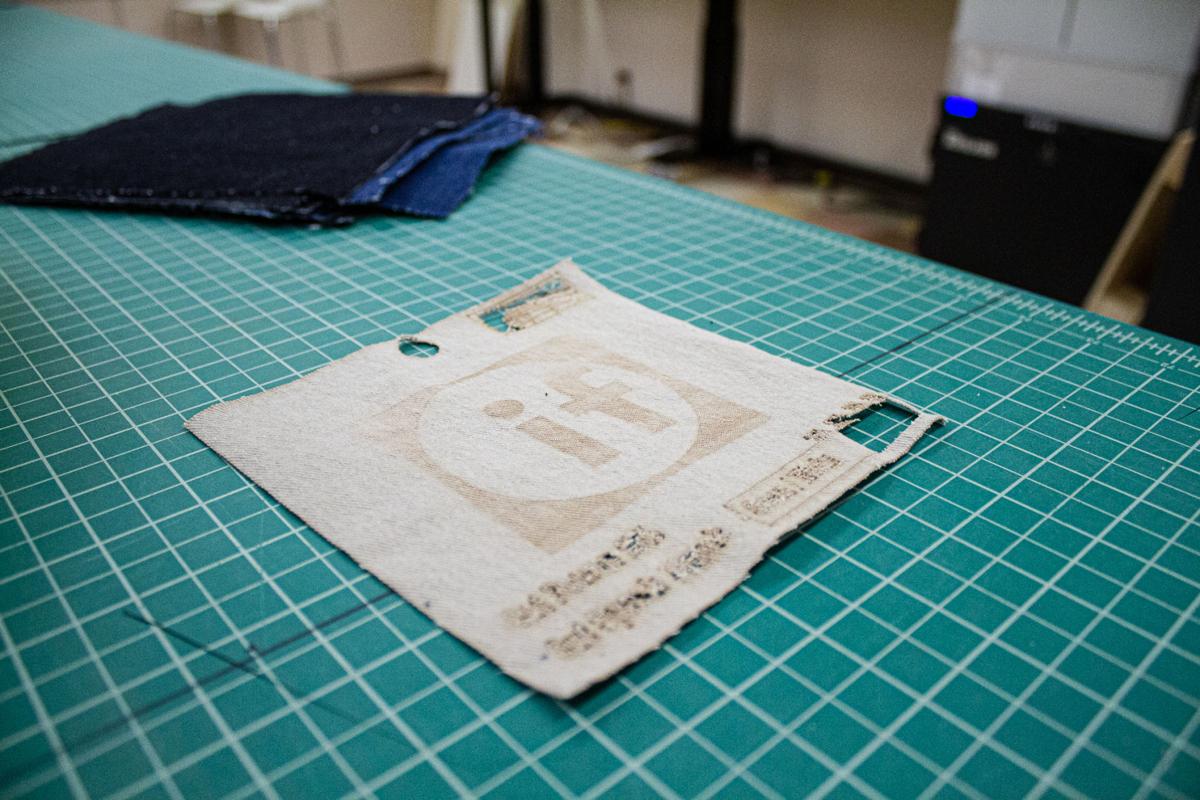 The symbol of Innovation Factory inscribed on a cloth. The space opened Monday, Oct. 28, 2019 with the goal of  including students and Missoulians with hands-on engineering projects. The space is open to the public and Factory-goers can achieve badges in mastery of the technology.

3D printers, laser cutters, sewing machines and a range of power tools will be made available to enterprising University of Montana students when the Innovation Factory opens Nov. 8.

Located on the second floor of the University Center, the Innovation Factory will launch after nearly two years of development, and will host workshops and lectures throughout November.

“As we move into a more automated economic future, we’re rallying around the idea of innovation as a human embodiment of liberal arts skills: problem solving, coming up with a creative solution when you hit a dead end,” said Brad Allen, who along with Elizabeth Dove, has overseen the planning for the space and work as its directors.

UM’s Office of Research and Creative Scholarships started planning for the Innovation Factory in 2017. After coordinating with private partners and consulting with the Office of the Provost, the office reached out to the media arts professors Dove and Allen to head the project.

Since becoming directors, the two have filled the space allotted to the innovation factory by acquiring state-of-the-art design tools, and repurposing discarded and forgotten equipment on campus.

Ostensibly called a “collaborative space” by Allen, the Innovation Factory combines engineering, entrepreneurship and art. Allen said although he hopes students will take advantage of the programs offered by the Innovation Factory, such as 1-credit courses in podcasting, coding and game design, anyone can operate the equipment during its open hours.

“One printer that we’re looking at is a furniture printer about the same size as that laser printer, and that would be one of the biggest printers in Montana. I think we’ll have about the only space in Montana that’s dedicated solely to scanning 3-dimensional objects, and turning it into a digital file,” Allen said.

The 3D scanner came on loan from UM’s Department of Anthropology, which had been using it for scanning bone.

The equipment in the Innovation Factory already has some mileage in the past few months, with the art students building boom boxes out of discarded truck tailgates and putting them to use during UM’s homecoming.

The Innovation Factory has also partnered with local businesses like Ear Candy on Higgins Avenue. In exchange for signage produced in the space’s shop, the record shop and music venue has agreed to help build a “wall of vinyl” for visitors to the Innovation Factory to browse.

In the past year, the space has undergone renovations to transform it from storage for the UC Bookstore, to what Dove and Allen have envisioned for the Innovation Factory, which included carving out a new office space for the Blackstone Launchpad at UM.

“To help students manifest their ideas in a prototype or in a design, those are skills where we’ve had to say ‘go find someone who can help you with that’ with the 3D printers or other tools. Now, there’s people who can help them within arm’s reach. That’s not an option we’ve had in the past,” said Paul Gladen, who has directed the program for nearly six years.

“30 Days of Innovation,” starts Nov. 8, and will run through Dec. 13. A complete schedule can be found at https://www.umt.edu/innovation-factory/calendar.php.