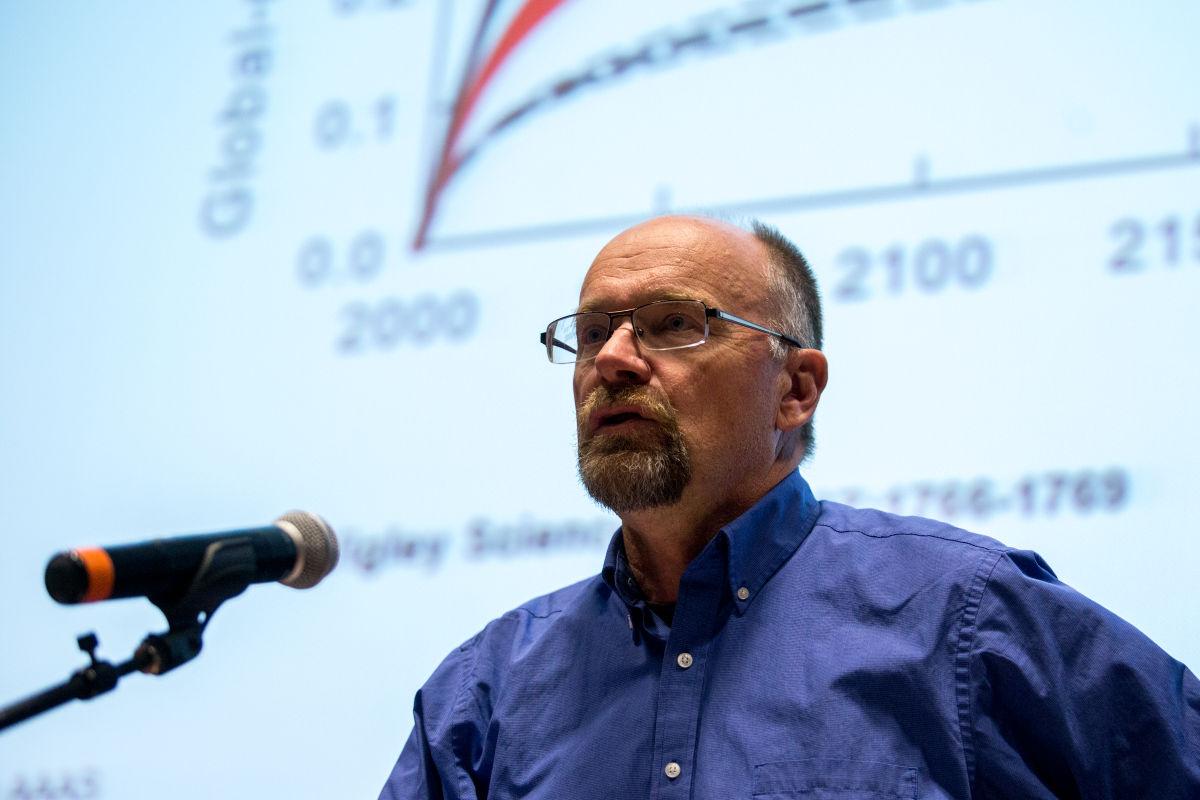 Environmental studies professor Len Broberg gives opening remarks at a panel on faith and climate change in the UC Theater on Nov. 16, 2015. Broberg will travel to Paris at the end of this month to attend the 2015 UN Climate Change Conference. 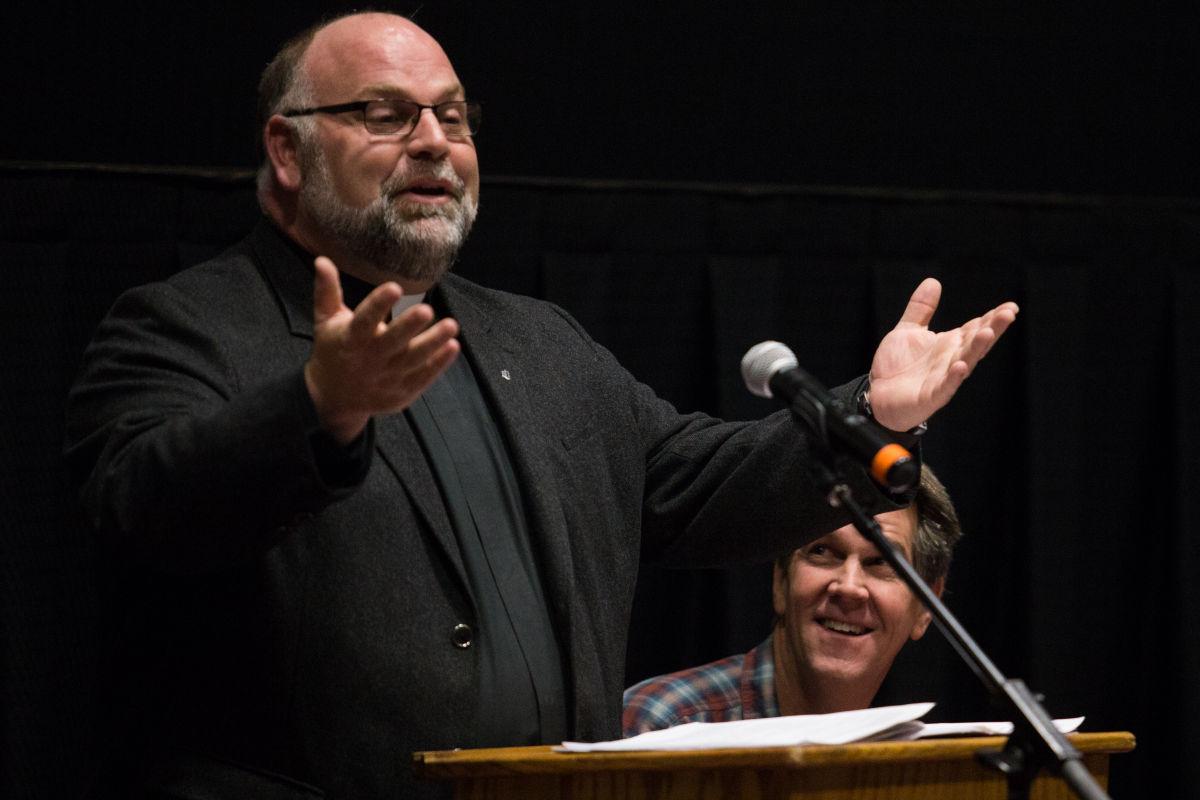 Catholic Priest Joseph Carver speaks to the UC Theater about the relationship of people of faith have with climate change on Nov. 16, 2015. Carver focused his attention on Laudato si', Pope Francis' encyclical in which he recognizes climate change and calls for change in anthropocentric attitudes. 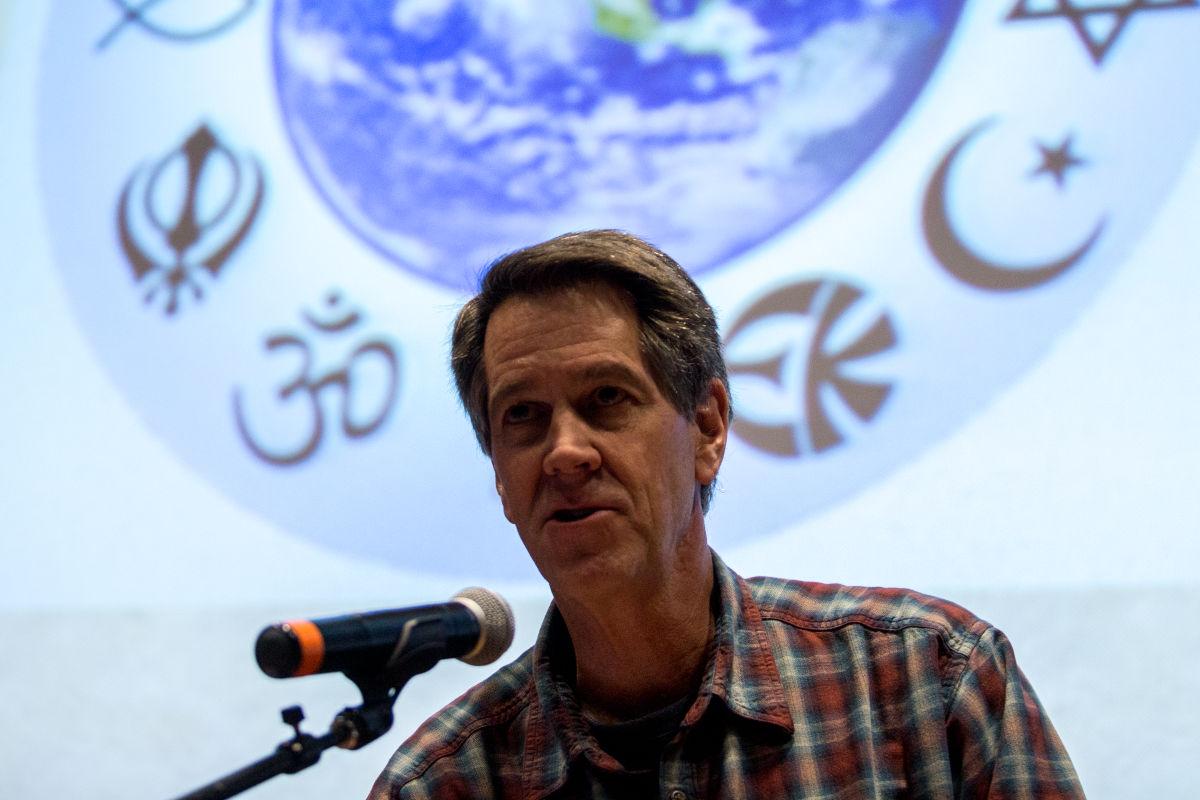 Associate professor Dan Spencer speaks about different world religions and their relationships with climate change at a panel on faith and climate change in the UC Theatre on Nov. 16, 2015.

Four religious panelists discussed the importance of faith based communities coming together to fight climate change during a presentation on Monday night.

“Through the lens of faith we can transcend the sectarian divisions that we have experienced so often in our attempts of dialogue,” Catholic Priest Joseph Carver said during his presentation.

Faith and Climate Action Montana, a coalition of faith leaders and environmental groups, organized the UC theater event attended by 100 students and community members, of which Carver was a panelist.

Carver acknowledged that climate change hasn’t been a popular topic among Catholic communities, mostly because of a perceived clash between science and the Bible. This is changing, however, due to the rising popularity of Pope Francis. Previous Pope John Paul and Benedict spoke of climate change’s importance, but lacked the popularity to be heard. Now it is a topic of conversation, Carver said.

Carver paraphrased and discussed the Pope’s climate change encyclical, a letter sent to all Roman Catholic bishops. The letter illustrated societies’ obsession with technology, endless consumption habits and what the Pope calls “the comidification of the world.”

Carver said Pope Francis calls out human’s anthropocentric view of the world and enforces the idea that humans are one small part of the cosmos, which is seeing the effect of climate change.

“One of the things so profound of the Pope’s encyclical is that it starts with science,” Spencer, a member of the Protestant church, said.

The Pope is not alone in his beliefs. Climate change has long been on the dockets of most world religions, according to Spencer. He cited Buddhist, Islamic and Jewish doctrines on global warming.

Evangelists are the most outspoken religion against climate change, and they get plenty of media attention, Spencer said. He said he encourages creating climate change dialogue with people who are open to listening, not those who already hold a firm position.

He ran into a similar situation when coming out as gay in the 1980s. He was frustrated with some people in church not listening to his story. So he tried a different tactic and got much further, only talking with people open to different points of view. He can’t believe gay marriage is legal today, a change ushered in after some faith-based people got behind the idea.

Other speakers included environmental professor Len Broberg and Climate Smart Missoula’s Caroline Lauer. Broberg talked about the upcoming UN climate change panel in Paris, of which he will be in attendance. Lauer spoke about how people can engage locally to combat climate change.

"More people are seeing the effects of climate change in their own communities," Huseth said.