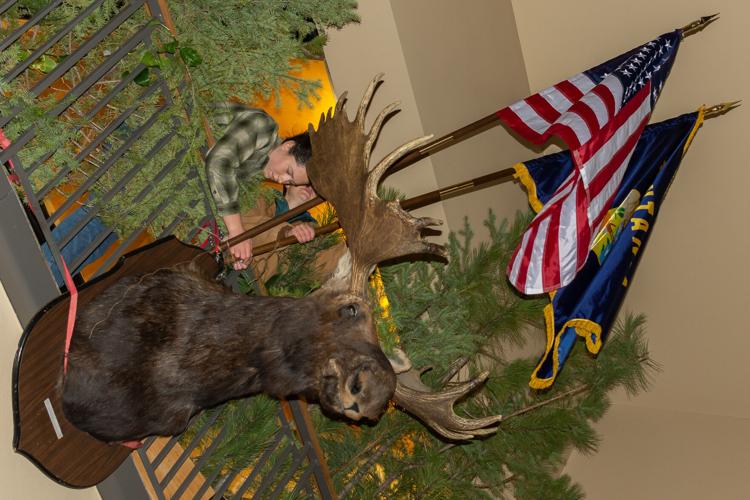 Foresters add flags and pine needles behind Bertha the Moose at the Law School. The moose is usually at the front entrance of the Forestry School, but law students successfully moved Bertha to the Law School earlier this semester 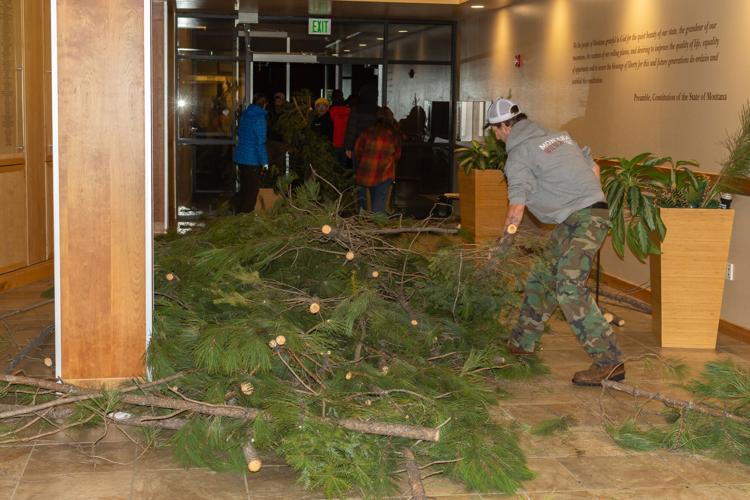 Trees in toilets. Branches framing the stolen head of Bertha, hanging from the law school balcony. Tree slabs with the messages, “Foresters Once,” and “Here’s some legal vocab for you: ‘reprisal,’ ‘disproportionate,’ ‘response.’” All in the name of revenge.

On Nov. 3, University of Montana law students stole beloved moose head and campus icon Bertha from the Forestry Building in a near century-long heist tradition. On the evening of Nov. 8, forestry students struck back.

The tradition of stealing Bertha goes back to the 1920s when she was first gifted to UM’s forestry club by famous German forester Carl Schenck, who founded the first forestry school in the United States and taught two semesters at UM.

Her hulking 60-pound bust stands at about half the height of an adult human, lined with dark hair and wide antlers that cup forward. As the gorgeous pride of the Foresters’ Club, she was kidnapped by several campus groups starting in the 1930s, but the law students became the most prolific capturers. The snatching of Bertha is usually planned around the annual Foresters’ Ball, a hallmark event for forestry students that Bertha would be loath to miss.

The same night Bertha was stolen this year, a group chat of Foresters’ Ball planners and students burst into activity, first-year student Chyanne Austin said. Ideas on retaliation were thrown left and right, including both serious and sarcastic suggestions.

Some students wondered if they could get class credit for capturing deer and squirrels to set loose in the law building. Austin remembers being baffled at how many male students wanted to pee on the doors.

But the foresters were looking to keep things classy. The Foresters’ Ball committee president, Mason Banks, made the ultimate decision on their plans and sent students on divide-and-conquer missions to get ready for their night of revenge.

Students filled several trash bags full of leaves, and some heisters gathered trees and limbs from a prescribed burn spot. An ominous taunt was posted on the Instagram account ForestersBall1915, the account used by the Foresters’ Ball committee to boost hype about the annual event. They posted a single picture of a pine branch with the hashtag “JusticeForBertha.”

The students met at 11 p.m. on Nov. 8 just outside the law school building. One drove a trailer full of logging debris that would be carried by the bag-full into the building. A woman waiting for the students let them inside and gave the pranksters a run down on rules. Austin said all the guidelines were understandable, like no chainsaw grease on door knobs or trees touching the ceiling, which would be a fire hazard.

After that, students flew across the building, laughter and rustling bags echoing in the nighttime hallways. Austin worked on framing Bertha’s stolen bust in trees while others replaced flags with thin trees. Even more trees were shoved into the toilets. At the end of the night, the vengeful foresters took pictures and posted their plot on the Foresters’ Ball Instagram.

“Revenge is best served with trees!” the Instagram caption read. “After the lawyers stole our beloved Bertha last week, we had to respond, and respond we did! We turned the Law School into a beautiful forest, complete with both coniferous and deciduous touches. Everyone had an absolute blast and we even gave the lawyers some assistance in cleaning up!”

On the day following, Austin remembers her phone buzzing with joyful updates as foresters witnessed law students’ reactions. Foresters cleaned up the vegetation vandalism shortly after the heist. While the revenge itself was short-lived, some foresters gloated on social media and smiled long after they swept up the needles.

While vengeance is theirs, it’s not the end of the fun for foresters at UM. Over the next few months, students will prepare for the Foresters’ Ball, a woodsy, flannel-esque event where students build a logger’s village, swing dance and party before taking it all down — all in a matter of days.

It’s the first ball since COVID-19, and students say they’re eager to reconnect with the long-held tradition. That’s the part Banks is most excited for, he said. The ball is scheduled for Feb. 3-4, 2023 and is open to the public. All can buy tickets on GrizTix now.