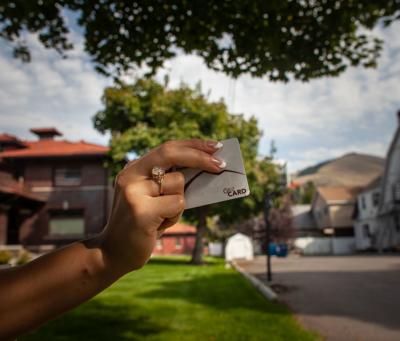 The last night of recruitment means no drinking and no parties. But soon, when fraternities begin hosting parties and other functions, some attendees will be required to swipe their University of Montana-issued Griz Cards through a scanner at the door. The people scanning their cards won’t be hosting fraternity members, and they won’t be random underage students who walk through the door. According to the director of the Office of Fraternity and Sorority Involvement (FSI), Lacey Zinke, the only students scanning at the door will be those included on guest lists for the parties.

The majority of students on guest lists are most likely sorority women, Zinke said. When a person swipes a Griz Card at one of the five fraternities, the scanner’s name, University ID number, the date and time of scanning are transferred to the FSI office, where the data are kept for a minimum of seven years, according to Zinke.

The Kaimin first reported on the Griz Card policy when it went into effect Spring 2019. Since then, it has generated questions about privacy and gender discrimination. And it comes just after the University asked sororities to report sexual assaults, and after one fraternity member was accused of rape by a sorority member who spoke with the Missoulian in January. The scanner policy states any UM Greek Life function with alcohol is required to have a Griz Card scanner, to corroborate an existing paper guest list.

"The biggest issue for me is that [the University] wants to know who people are associating with socially,"

“Fraternities usually partner with a sorority for their functions,” said Adrianne Donald, director of the University Center.

Since sororities aren’t able to host functions with alcohol, the Griz Card swipe policy only applies to fraternities. This means sorority women swipe their cards most often.

In some cases, however, fraternities partner with other fraternities for functions, Donald said, and visiting fraternity men on the guest list swipe in at the party.

Zinke said the scanner policy exists solely as a way to verify and confirm information.“We want to make sure that we’re helping our organizations be as safe as they can be,” Zinke said. “There’s so much more than just the Griz Card scanner piece. I think that’s an easy thing to latch on to.”

Zinke said the National American Interfraternity Conference (NIFC) is requiring all fraternity councils to have what she called “insurance,” or an additional method to ensure safety during functions, on top of NIFC regulations. The Griz Card swiper policy is UM’s way of meeting that standard.

Todd Shelton, chief communication officer for the NIFC, confirmed that it is not unusual for fraternities to use ID cards in this manner, despite fraternities being external entities separate from universities.

“As far as national guidelines go, [the NIFC] requires a guest list and member-to-guest ratio (which can vary among organizations) for events with alcohol,” Shelton said in an email statement. “But that doesn’t exclude a system with ID cards for managing attendance.”

The information is sent from the Griz Card Center to Zinke and stored in the form of an Excel spreadsheet on her computer.

“We haven’t gotten rid of anything yet,” Zinke said. “They’re held onto for quite some time.”

Joel Reidenberg, a professor at Fordham University School of Law in New York and the founding academic director of the Center on Law and Information Policy, said the Griz swipe policy seems invasive and discriminatory.

“The biggest issue for me is that [the University] wants to know who people are associating with socially,” Reidenberg said. “This is about the University defending itself, not defending the individual student.”

He said the card-swipe policy seemed too redundant and useless to be offering any sort of extra protection. “It doesn’t seem to me like they have a sufficiently legitimate interest to require these scanners at these events,” he said.

Zinke disagreed that swipes are an invasion of student privacy.

“If it’s an invasion of privacy, then they don’t have to go to the party,” she said. “We aren’t forcing them to swipe their Griz Cards.”

“If you’re not going to match our safety standards, then you don’t need to be here,” Zinke added.

One of the reasons the FSI office may want to check the electronic swipes is if there is an accusation of a frat serving alcohol, Donald said. The fraternities abide by a “bring your own beer” policy, meaning partygoers are responsible for their own drinks, and the fraternities can’t provide alcohol.

Underage drinkers who are asked to swipe at the door of the fraternity might not understand that their Friday-night drinking could be shared with a University employee.

"It's relatively useless ... It doesn't indicate much. It only tells us when a person swipes in, not how long they were there or when they left."

“If there was alcohol being served, we might want to see, ‘Yes, I see you were there,’” Donald said.

“It allows for an extra level of security,” Donald added. She explained that card scanners can help ensure only people on the guest list are allowed into a party, but that the swipe information could also aid in the case of an assault or a Title IX complaint. Donald said the swipes would help the Title IX office gather witnesses.

Regardless, Reidenberg, of Fordham Law, said there’s an obvious disproportionate impact based on gender, no matter how you frame it.

Because scanners are only required at functions hosted by fraternity men, and sorority women are the ones most often swiping, Reidenberg said the policy clearly has a disparate effect on women.

Zinke said the policy is focused less on gender than it is on safety.

“It’s just straight for safety. It’s not because they’re sorority women,” Zinke said. “There can be other men swiped in on that too. It’s not just: If you’re a woman, you’re going to swipe the card.’”

In addition, Reidenberg said collecting data that state what time people swipe in, but not when they leave, is problematic.

“It’s relatively useless,” he said. “It doesn’t indicate much. It only tells us when a person swipes in, not how long they were there or when they left.”

It also leaves a hole regarding who’s at the party. What about the fraternity members hosting the party, or those who might be there and are not on the guest list?

Zinke countered that people not on the paper list should not be let into the function in the first place.

Yet students were observed attending a party at Sigma Chi on Aug. 30, 2019, without being on the list or swiping an ID.

Another issue, Reidenberg noted, is that the process itself seems inconsistent and questionable.

"It's just straight for safety. It's not because they're sorority women ... There can be other men swiped in on that too. It's not just if you're a woman you're going to swipe the card."

There’s no guarantee fraternities will use the scanners. No one from the FSI office is physically at a function to ensure a scanner’s use. Both Donald and Zinke did, however, mention sober monitors — fraternity members who won’t drink during the function — are in place to make sure the fraternities are following the rules and getting Griz swipes.

The information that FSI requests is the standard Griz swipe data, said Maggie McCarthy, manager of the Griz Card Center. But,

if a group wants additional information, it can request that, too, she said. Grade levels, housing situations and email addresses are all requestable. Zinke said the FSI office has never requested additional swipe information.

“We encourage groups to inform students if their email will be used,” McCarthy said.

Most groups adhere to that transparency, McCarthy said, but ultimately it’s up to the discretion of each organization. She also said it is important to note that the Griz Card Center reserves the right to deny any request for additional information at any time.

The only parameter for renting a Griz Card scanner is campus affiliation, McCarthy said. “We aren’t policing what they’re using it for, or where they’re using it,” she continued. “It’s not something we track.”

McCarthy said many groups use the information to track trends like busiest times or the popularity of an event, and she stressed that anonymity is the first priority in the scanner program.

Of course, each scanner has a check-out history, and would be traceable back to its event, McCarthy said.“If a legal council queried us, there is a way to go back through the system and see what event the scanner was used at,” she said.

In general, the Griz Card Center acts as an intermediary between the actual event and the group requesting information. When the scanner is returned the next day, the Center downloads the data into a spreadsheet and sends it to the campus group.

The data remain in the Griz Card Center database for a Montana-mandated minimum of seven years, McCarthy said.

Sandra Curtis, director of UM Housing, a department that also uses the scanners for on-campus events, said it’s “like a business transaction between the Griz Card Center and an external office.”

Curtis said the only groups that have access to the information are the Griz Card Center and the requesting group, in this case the FSI office.

That said, Curtis acknowledged the information is available through subpoenas by the police and could be part of a Freedom of Information request.

Reidenberg said the policy feels at best redundant and at worst manipulative and driven out of self-interest.

“This is just another instance of the state doing something just because they can,” Reidenberg said, “without thinking of the ramifications.”

Greek Life gives back for charity

UM Greek Life collectively raised over $20,000 during the past academic year for the Greek community’s various philanthropies, according to a …