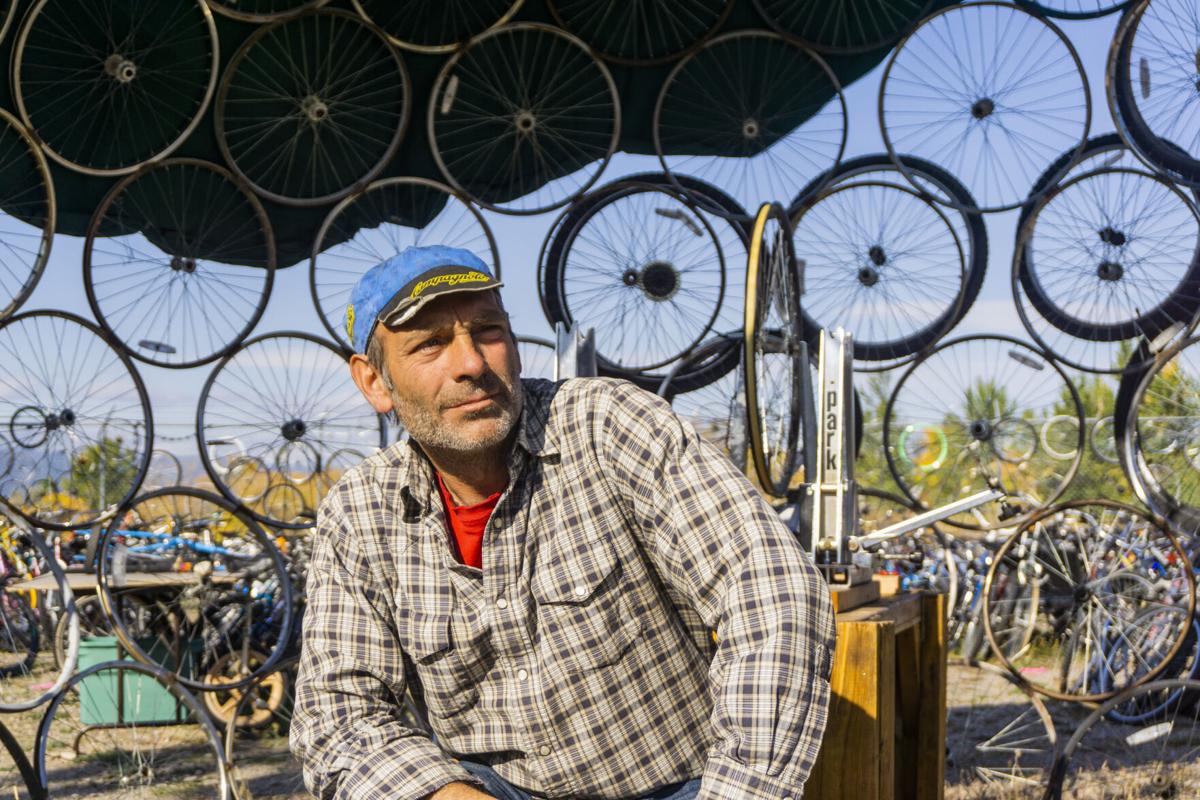 Bob Giordano sits under a dome of tires in the back of Free Cycles on Oct. 6. The UM grad has operated the free bike program for 25 years. 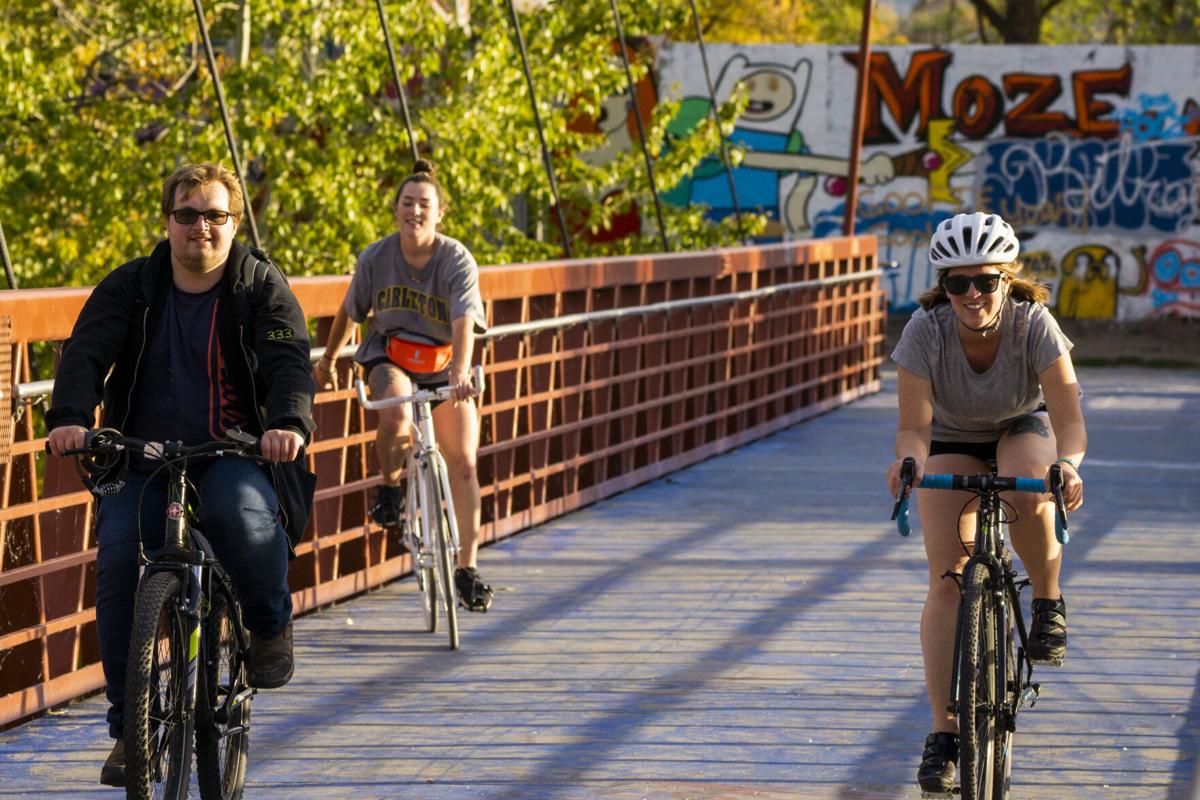 Chad Keller leads a group of bikers across the California Street Pedestrian Bridge during a ASUM Transportation Monday night ride. 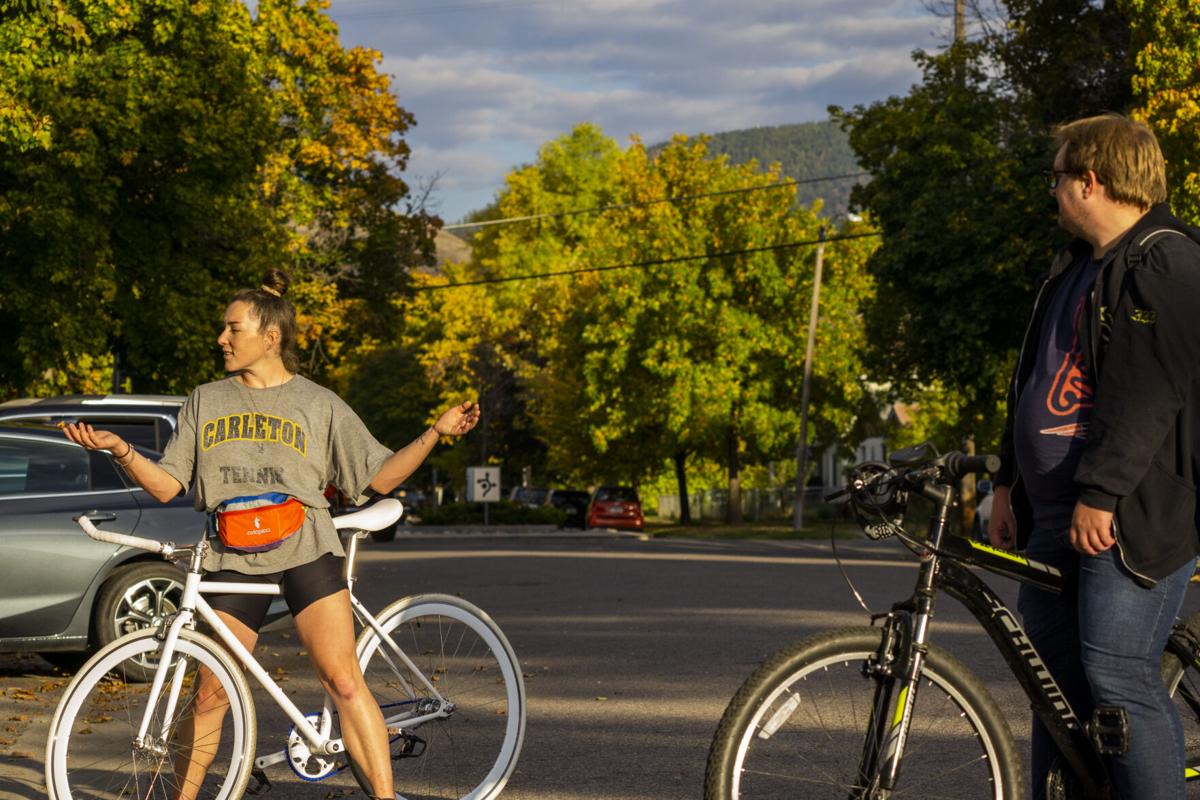 Jenny Alvauaje points out different places to cycle through town during an ASUM transportation sponsored evening ride on Oct. 4.

Bob Giordano sits under a dome of tires in the back of Free Cycles on Oct. 6. The UM grad has operated the free bike program for 25 years.

Chad Keller leads a group of bikers across the California Street Pedestrian Bridge during a ASUM Transportation Monday night ride.

Jenny Alvauaje points out different places to cycle through town during an ASUM transportation sponsored evening ride on Oct. 4.

“I never realized this town was so easy to get around,” Keller said while riding through the Riverside neighborhood Oct. 4. “You really can get everywhere on bike.”

Alvauaje, a transportation ambassador with ASUM, helps sponsor the community ride event, which takes place each Monday at 5:30 p.m. Although Alvauaje and Keller were the only two bikers riding that night, it’s no secret the two-wheeled, human-powered machine is one of the city’s most popular pastimes.

Roughly 6% of Missoula residents use biking as their main form of transportation year round, though cold weather considerably lowers the rate of bikers in the winter, according to the city’s metropolitan planning organization. With the region continuing to expand, city officials are working to triple the number of cyclists by 2045.

But while Missoula is one of the top 10 safest U.S. cities to own a bike in, a fifth of all the city’s serious vehicle crashes include bicycles. Future upgrades could strengthen previously untouched roads, especially in the downtown area.

“We are currently in the planning process to upgrade Higgins between Broadway and Brooks,” city biking planner Ben Weiss said. “It would be a comprehensive fix. A lot of people can’t even turn left in a car there during busy hours, let alone bikers having their own lane to ride on.”

The city plans to add more biking signage near designated paths, improve existing bike lanes and incorporate “greenways,” which are smaller streets that can act as a thoroughfare for pedestrians. The larger changes involving intersections and main streets could take longer because the city would have to get approval from the Montana Department of Transportation.

Bob Giordano, director of Free Cycles community bike shop, has long been an advocate for bike use. As he walked the non-profit’s side yard crammed with rows of renovated bikes, he said more work needs to be done to keep cyclists safe.

“There’s about two bikers involved in car crashes here every week, and those are just the reported ones,” Giordano said. “We have some great sections of bike access in this town, but it is still a patchwork.”

In summer 2020, a woman was hospitalized after a car hit and dragged her off her bike while heading South on the Hipstrip. Another man was hit and killed on Stephens Street in February.

Weiss said on average about 60 out of 3,000 crashes in the city involve bikes. Yet out of the 100 annual serious crashes, 20 involved cyclists. Giordano wants to see more protected bike lanes, like the raised paths on North Higgins, and roundabouts to replace city stop lights.

Separated bike lanes on 5th and 6th Streets and the completion of the Bear-tracks Bridge across Higgins with protected bike lanes are some of the most recent bicycle-related improvemeants.

Free Cycles helps people build free bikes in exchange for volunteering around its First Street location. In 25 years of service, more than 22,000 people have made free bikes with the organization.

Giordano said the requirements dropped from four hours of volunteer work to just 90 minutes. While the weather is still fair, users of freecycles can still build their bikes outside.

“We want to get as many people to be more sustainable and healthy by commuting in the city with their bike [as possible],” Giordano said. “I traded in my car years ago and haven’t looked back.”

Free Cycles is open 10 a.m to 6 p.m. Wednesday through Saturday. Alongside the free bike service, the shop does parts repairs and replacements, live music and now has its own bike shop.

At UM’s transportation department, the demand for bikes is growing. Daniel Gundlach, a transit supervisor for ASUM, said the department’s 60 long-term rental bikes sold out by the beginning of the semester.

“We usually sell out at some point, but within the first weekend is faster than usual,” he said.

ASUM offers weekly, monthly, semester-long and yearly rates for three-gear bicycles. The office also started the weekly ride program to get more students connected during a more restrictive part of the pandemic.

Alvauaje, who does the rides every other week, said she prefers biking in Missoula compared to her past city of Los Angeles. While guiding participants around Missoula, a five mile average ride, Alvauaje also points out popular cafes or important sites in town.

“It’s honestly a really great job and I feel like I can unwind with a ride just as much as anything else,” Alvauaje said.