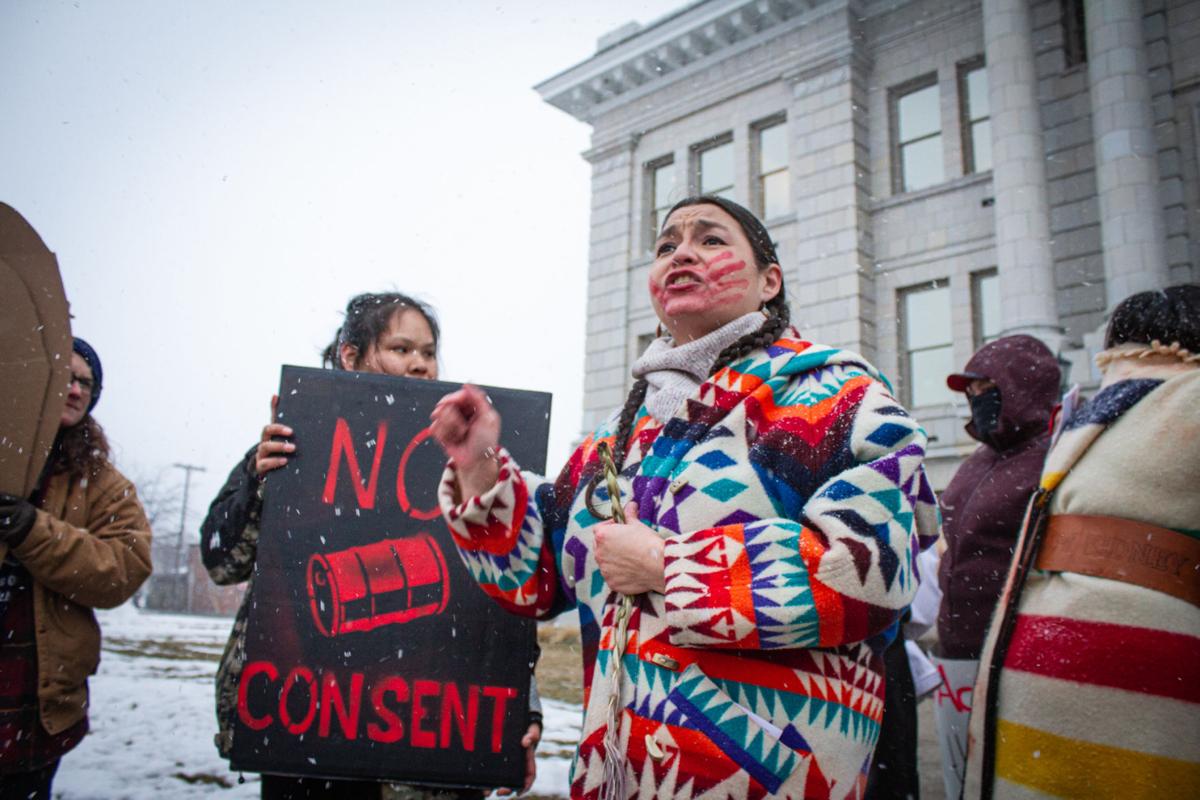 Claire Charlo, an advocate for the Confederate Salish Kootenai tribes, speaks during the gathering, addressing the construction of the Coastal GasLink pipeline on what the Wet'suwet'en tribe considers as their territory in British Columbia, Canada, and concern over the expansion of the Keystone XL pipeline through Montana. The protesters started on Higgins Ave. and concluded their gathering in front of the Missoula County Courthouse, late afternoon Friday, Feb. 14, 2020. 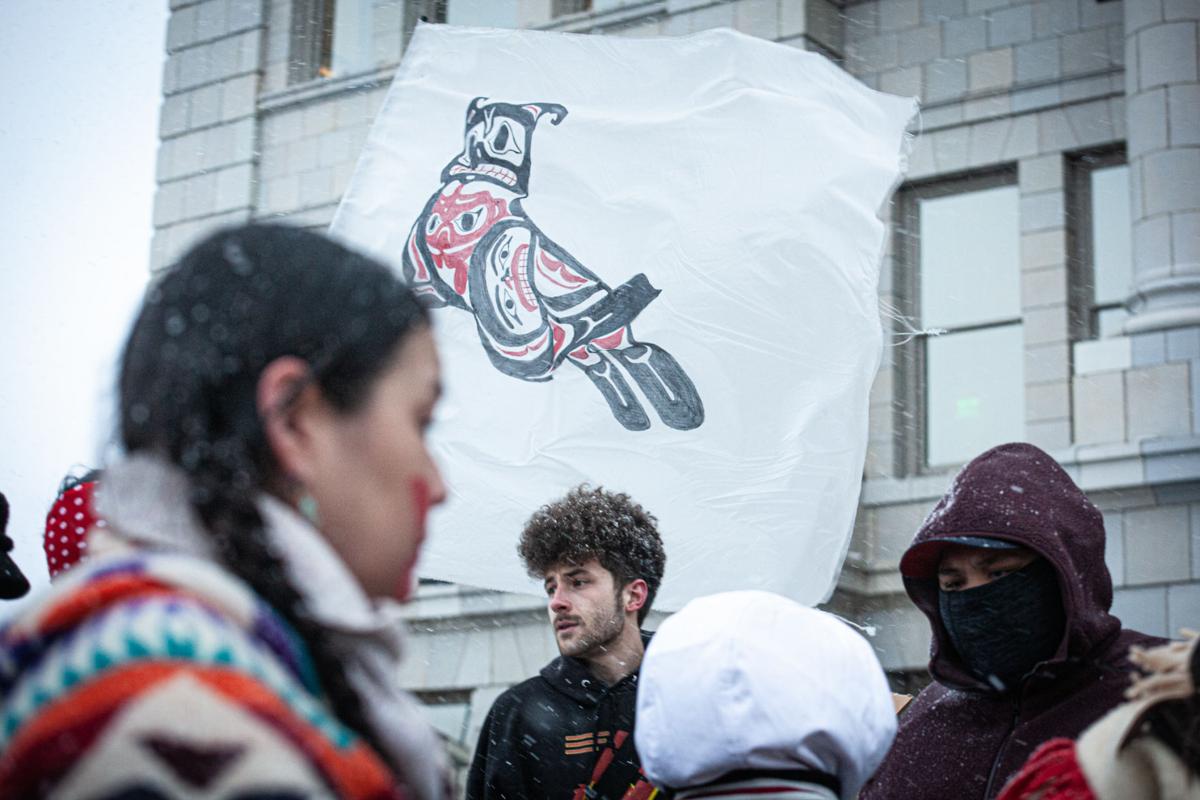 A flag with the Wet'suwet'en totem symbol flies during the gathering in front of the Missoula County Courthouse. 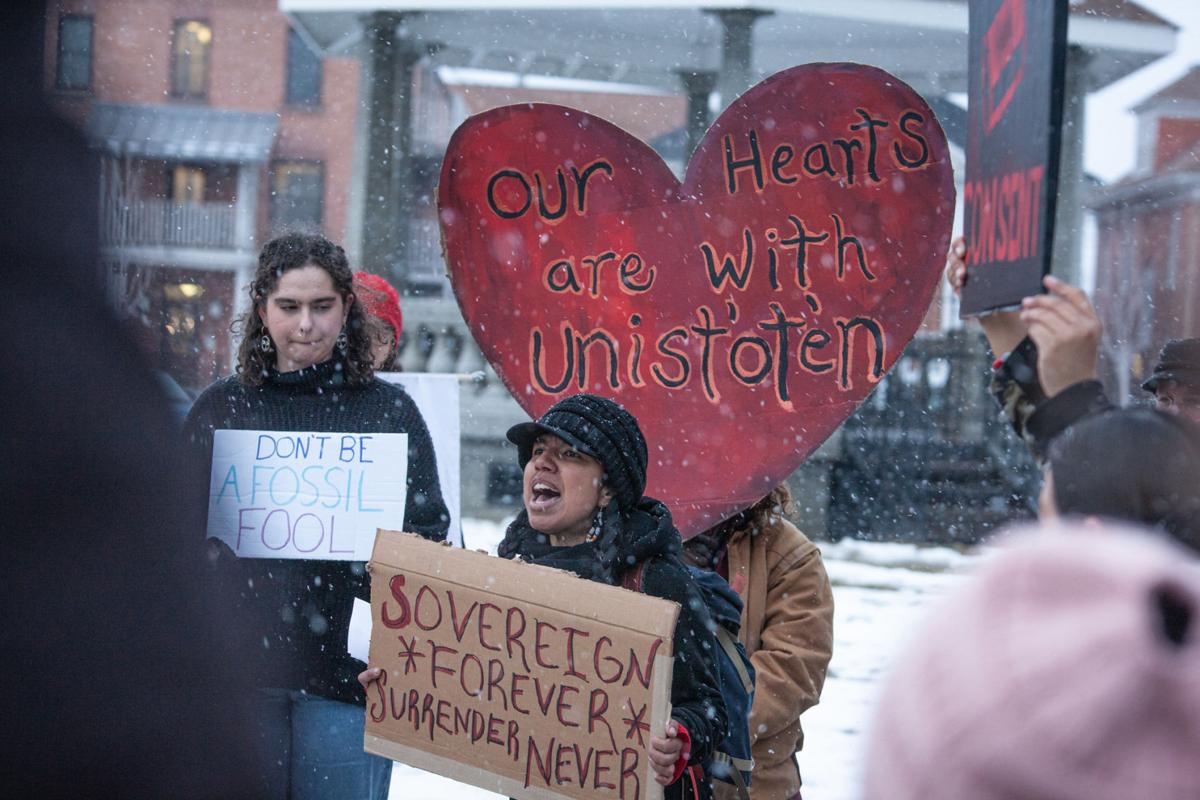 A protester who identified herself as a Missoula mom shouts during a gathering in support of the Wet'suwet'en tribe. 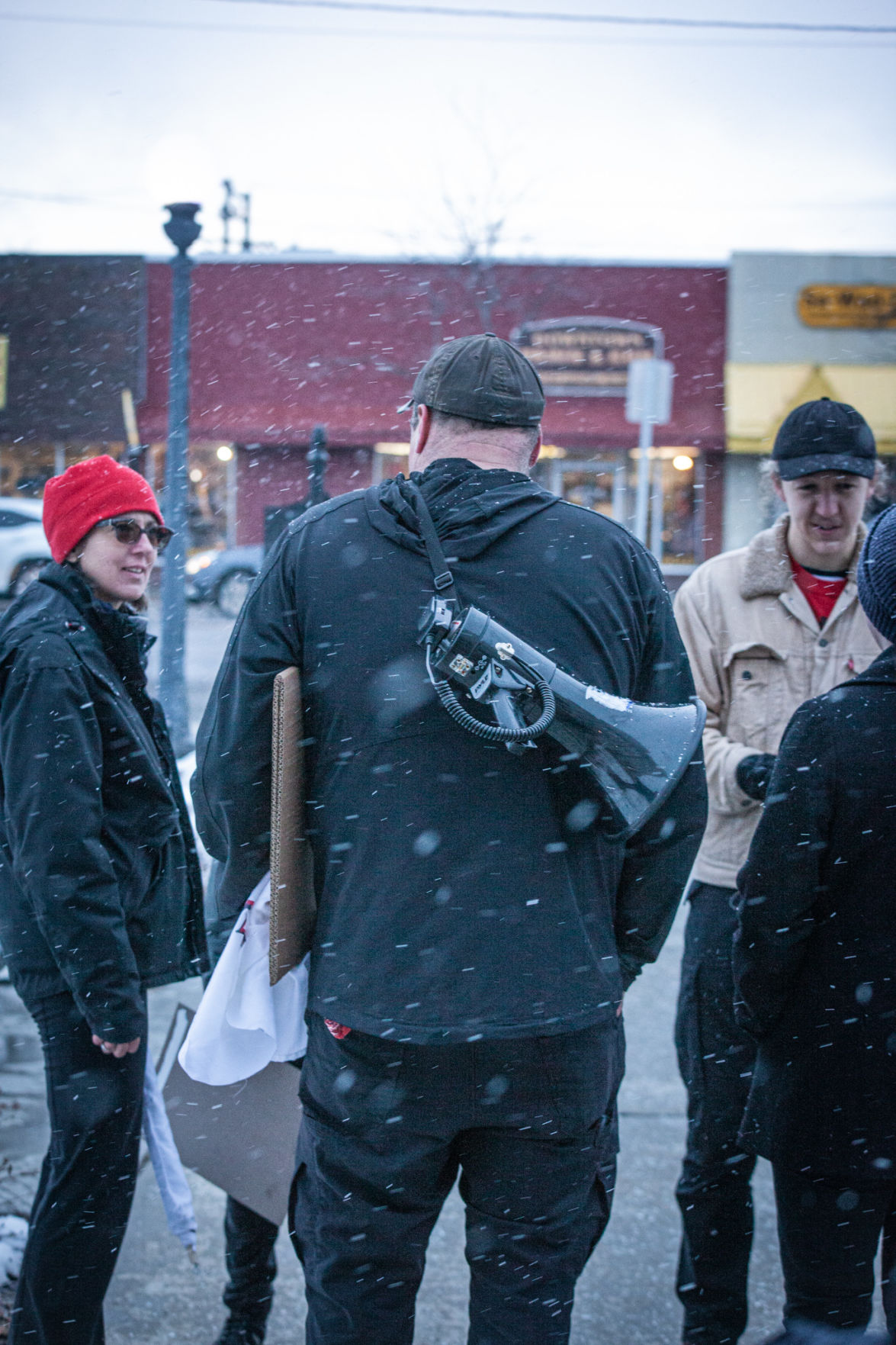 A protester wears a microphone at the gathering in front of the Missoula County Courthouse. The protester directed fellow attendees on the sidewalks on Higgins Avenue. 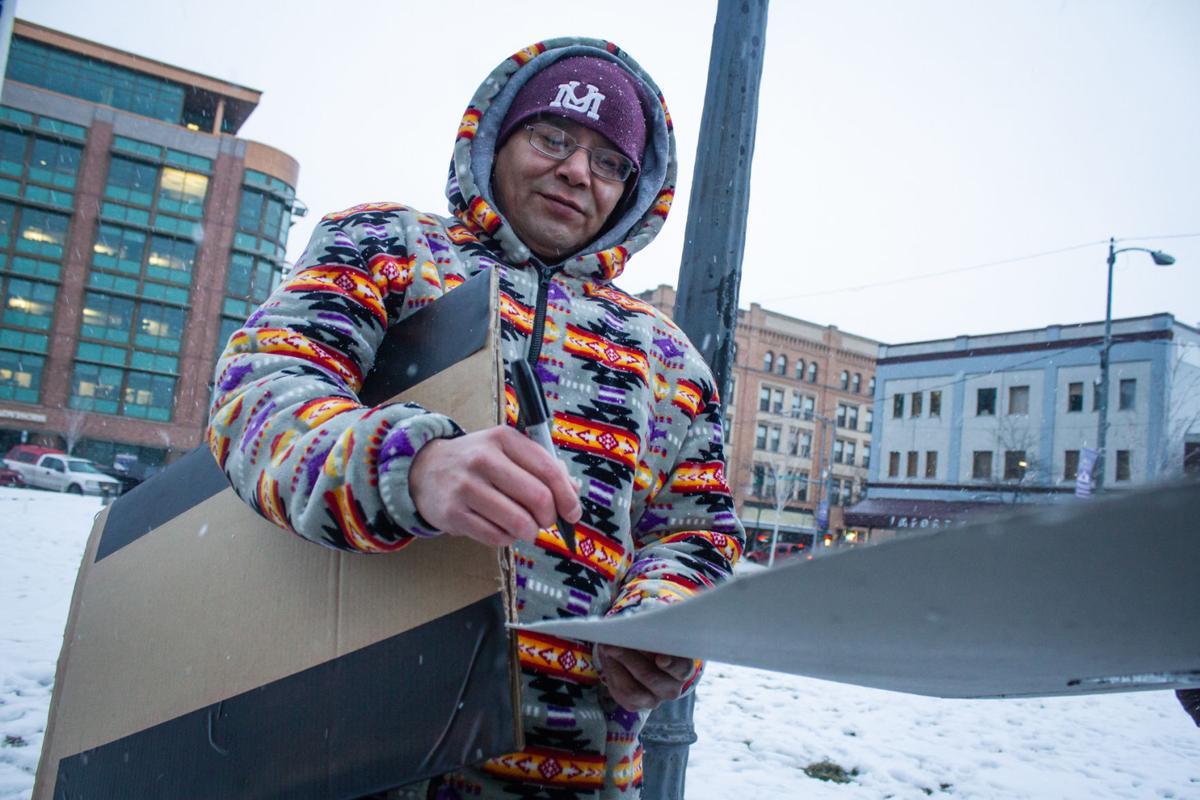 Darcey Anaqoude, 43, signs a fellow protester's poster during the gathering. Anaquode and his wife traveled to Missoula from Canada to support the Wet'suwet'en people during the pipeline protest. 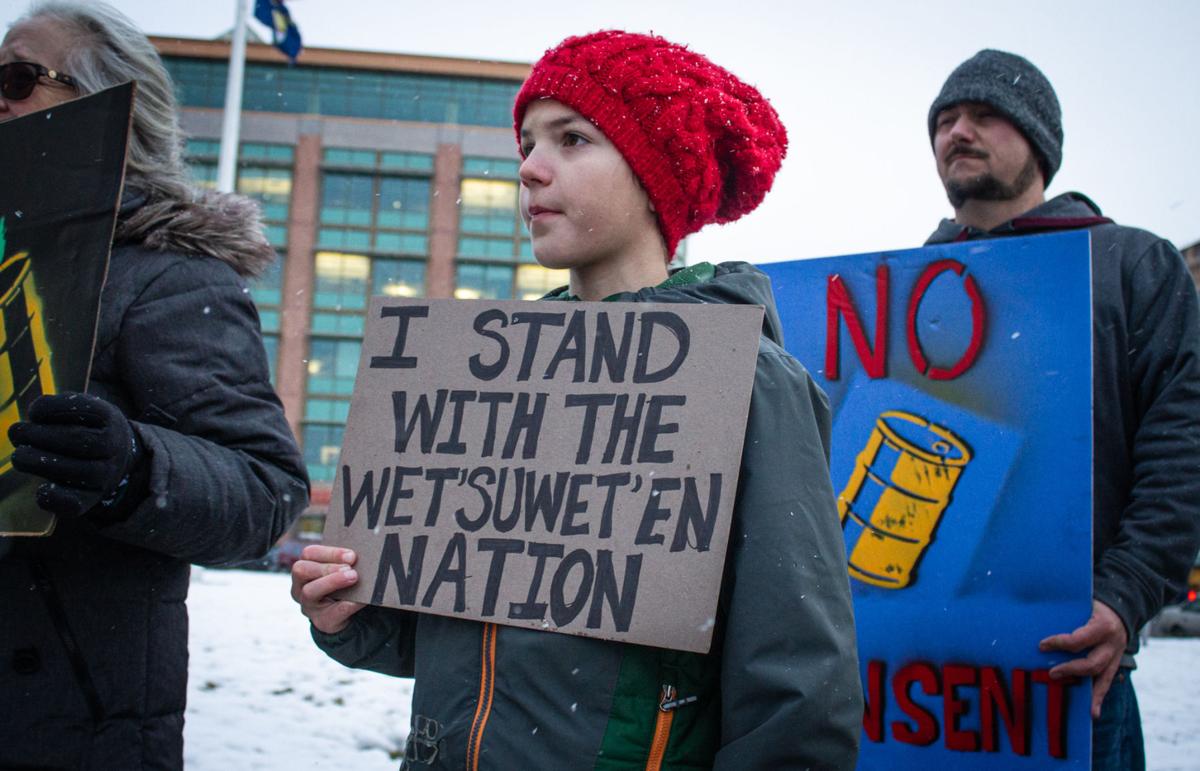 Mica Kantor, 11, shows support for the Wet'suwet'en nation at the gathering. 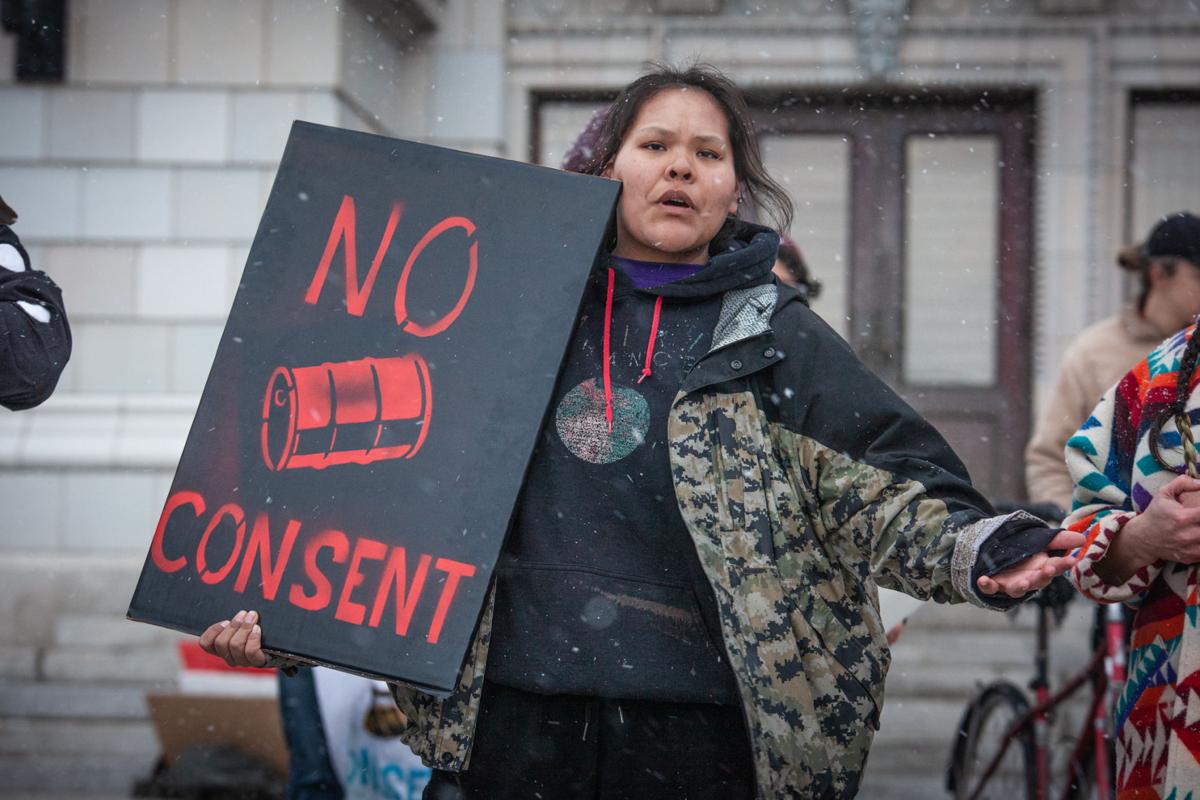 Alize Begay, 17, speaks at the gathering in front of the Missoula County Courthouse. Begay, like other pipeline protesters, had a sign that said "NO CONSENT" in protest of oil companies allegedly not asking permission from the Wet'suwet'en tribe to install the Coastal GasLink pipeline on what the tribe considers as their territory. The group also raised concern about the expansion of the Keystone XL pipeline in Montana. 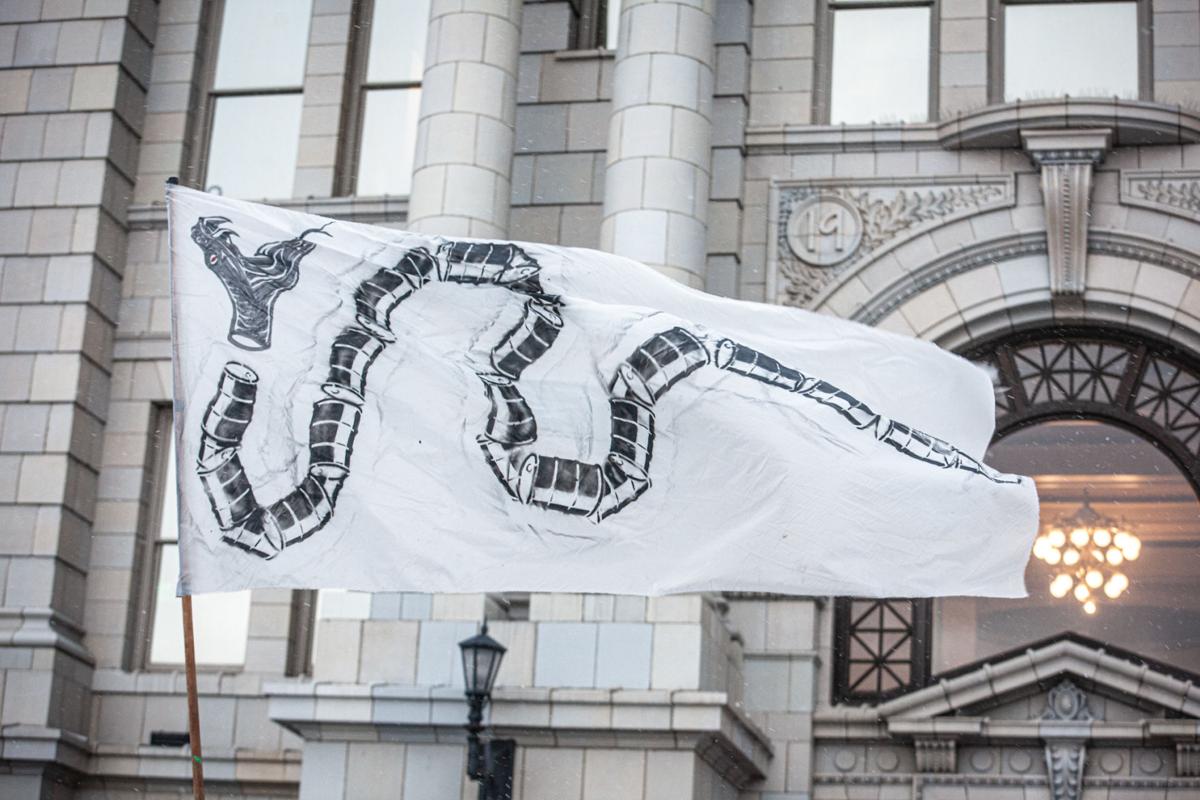 A flag with oil barrels as the body of a snake flies at the gathering outside the Missoula County Courthouse.

Protestors halted traffic on a Higgins Avenue crosswalk outside of El Cazador Friday evening, in response to growing unrest about the construction of the Coastal GasLink pipeline in Canada.

The protestors lined up on the crosswalk during rush hour to protest recent arrests of tribal leaders in British Columbia, Canada.

Claire Charlo, an advocate for the Confederated Salish and Kootenai

Tribes, acted as a spokesperson for the largely anonymous group. Charlo called for an action of solidarity with Wetʼsuwetʼen protestors in British Columbia who are fighting against the building of the Coastal GasLink pipeline on what they consider to be their traditional land.

Three female Wetʼsuwetʼen tribal leaders were arrested Monday during a ceremony following the blocking of commuter trains in Vancouver, Canada. This spurred the Wetʼsuwetʼen to call for an international day of solidarity, which Charlo and her group answered.

“The fact that people are being mildly inconvenienced compared to women being forcibly arrested during a ceremony, there is no comparison,” Charlo said.

The group of nearly 30 people held handmade signs with a variety of slogans like “Don’t be a fossil fool,” and “Our hearts are with Unist’ot’en,” the latter of which was painted on a large, pink heart made of cardboard.

The Missoula police responded to the demonstration after a complaint that the group was making it too difficult to turn at the light. Cpr. Patrick Malone said officers determined that the group was not breaking any laws and were allowed to protest in the crosswalk.

The group continued along Higgins heading toward the Missoula County Courthouse. When they arrived, the group circled around Charlo and other vocal members directly in front of the gray stone steps of the building.

“Thank you, everybody, for putting your lives and bodies on the line,” Charlo said to the crowd.

Brandon Fish, a University of Montana student, was one of the vocal members in the center of the group with Charlo. Fish said that the protest is meant to make people aware of how Indigenous peoples are being forcibly removed from their land for the benefit of oil and gas companies.

“What’s happening in Canada is going to happen here in Montana,” Fish said.

Fish pointed out that the Trump Administration is mirroring the direction of the Canadian government under Justin Trudeau by ignoring and bypassing environmental laws and review processes to push the Keystone XL pipeline forward in Montana.

The Trump administration approved the building of the Keystone XL pipeline through Montana in January. According to the approval signed by Interior Secretary David Bernhardt, the pipeline will cut through 46 miles of land that is held by the U.S. Army Corps of Engineers and the Bureau of Land Management.

“It’s a destruction of our rights not only as Indigenous people but as Montanans,” Fish said. “This is going against our own statehood and state constitution.”

The group has plans to stage more protests in the coming weeks.

Corrections have been made to this article to better reflect the reason for the protest, Claire Charlo’s position within the protest group and the involvement of the Missoula police.