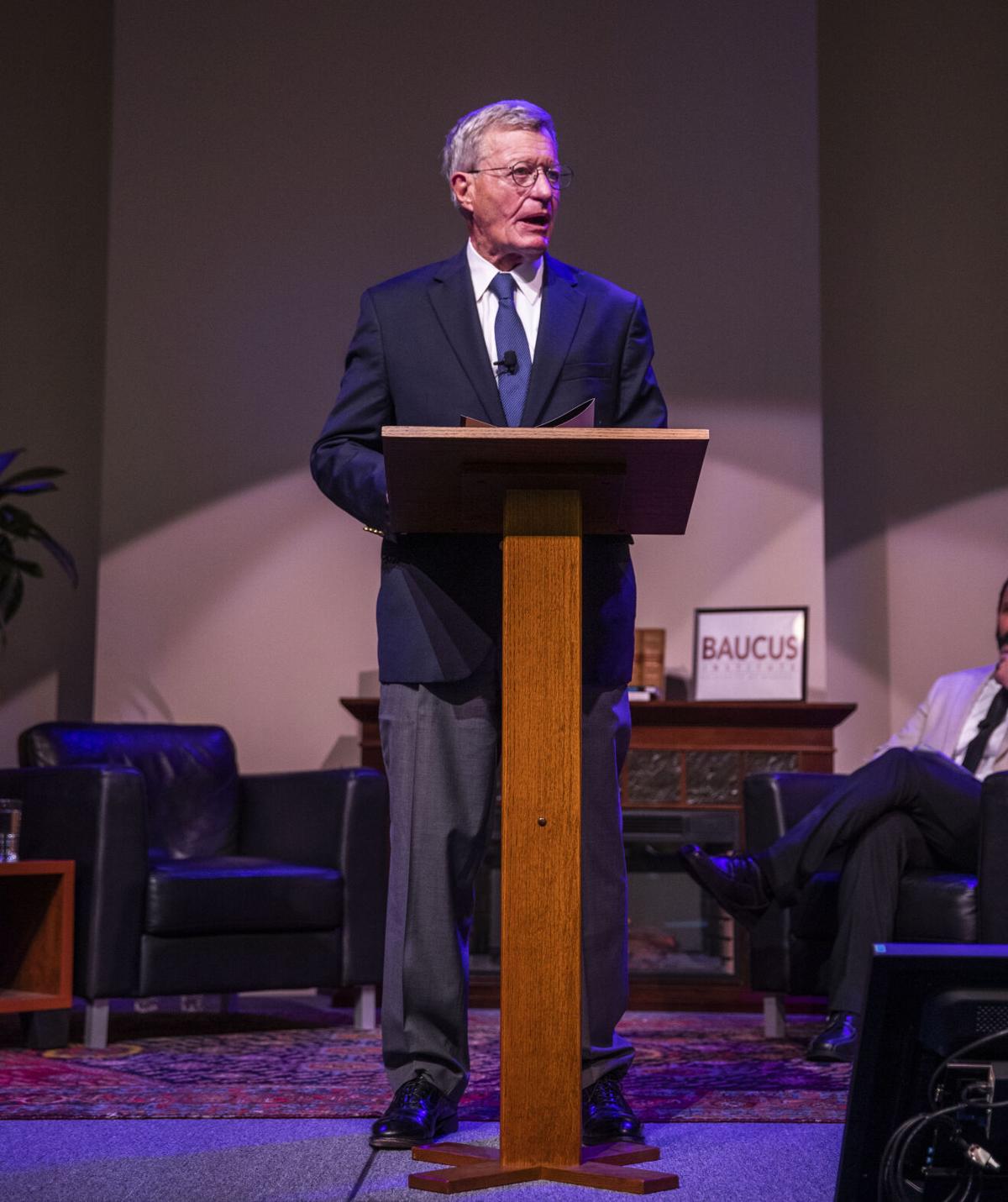 Former U.S. Ambassador to China and Montana Senator Max Baucus speaks to an in-person and virtual audience during “A Climate Conversation” event hosted by UM’s Max S. Baucus Institute at the University of Montana on Oct. 28. Guest speaker Baucus, Montana's longest-serving senator from 1978 to 2014, and former Vice President Al Gore, who joined the event via Zoom, spoke of the world’s current battle with climate change. 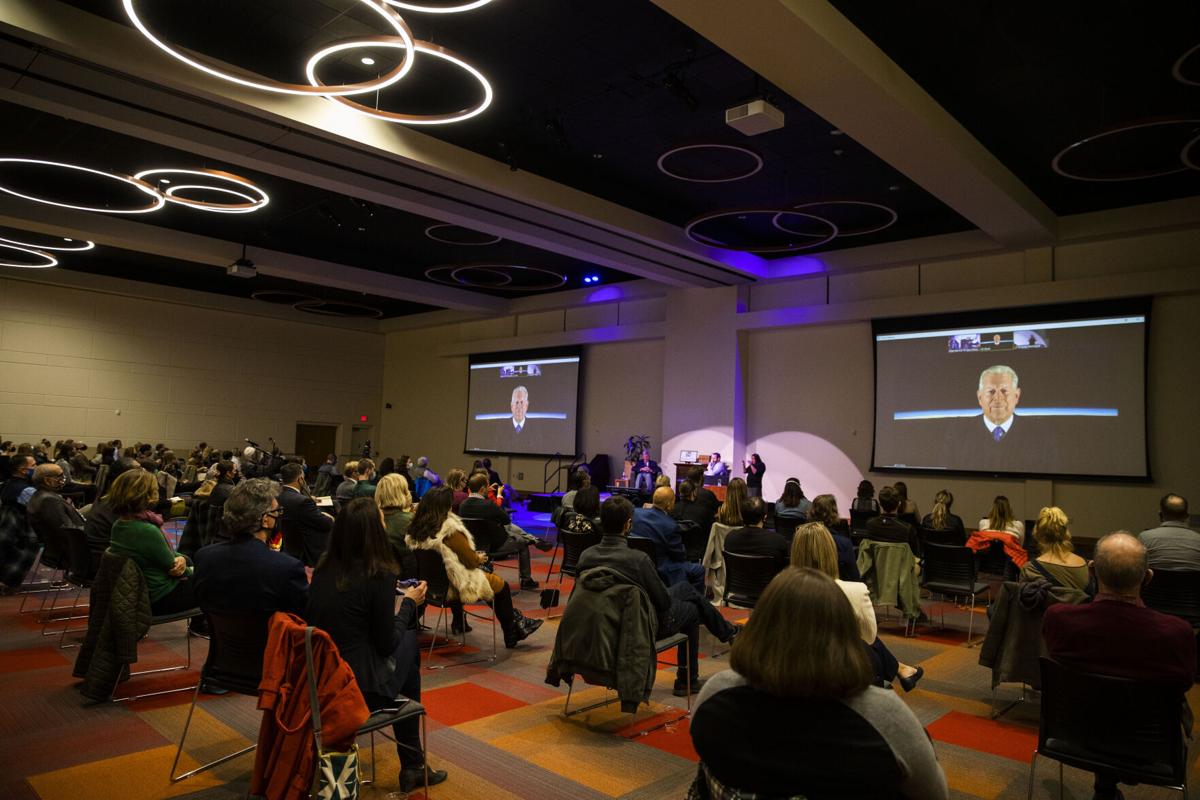 Former Vice President Al Gore joined the discussion via Zoom to talk about climate change, the issues surrounding it and possible solutions.

Former U.S. Ambassador to China and Montana Senator Max Baucus speaks to an in-person and virtual audience during “A Climate Conversation” event hosted by UM’s Max S. Baucus Institute at the University of Montana on Oct. 28. Guest speaker Baucus, Montana's longest-serving senator from 1978 to 2014, and former Vice President Al Gore, who joined the event via Zoom, spoke of the world’s current battle with climate change.

Former Vice President Al Gore joined the discussion via Zoom to talk about climate change, the issues surrounding it and possible solutions.

The background behind Gore — one of the world’s leading environmentalists, winner of the Nobel Peace Prize and author of “An Inconvenient Truth” — featured a photo of the sun rising over our planet, a thin curve of glowing blue set against a void of black.

“I'd like to start with the image behind me,” said Gore, the guest speaker of “A Climate Conversation” hosted by UM’s Max S. Baucus Institute, to a virtual and in-person audience. “This is a picture from the International Space Station. And I have it there because it shows how thin the shell of the atmosphere surrounding our planet really is.”

Gore said, while the sky above us seems like a “vast and limitless expanse,” it is actually incredibly thin. The slim line on the screen behind him holds all the oxygen and greenhouse gases of our atmosphere.

“If you can drive a car straight up from the ground to the top of that blue line, you've reached the top of the sky in about five minutes,” he said. “And yet, every single day, we are spewing another 162 million tons of man-made global warming pollution into that thin shell of atmosphere, using it as if it were an open sewer.”

Throughout the discussion on the world’s current battle with climate change, former U.S. Ambassador to China and Senator Max Baucus and Gore answered questions posed by UM students, faculty and Missoula community members.

Baucus and Gore discussed how China and the U.S., the top two emitters of carbon dioxide in the world, can work together to help fix the problems they’ve created, as well as the hope they have for the future and the faith they have in young people to save the planet.

The duo pressed that more people around the world are affected by fires, floods and other worsening natural disasters. On a surface level, they said, things look grim for the future of the world.

“Climate-driven extreme weather disasters impacted one out of every three Americans this year, just in the last four or five months,” Gore said. “And unfortunately, the impacts of the climate crisis, as the scientists predicted, are becoming much more severe, much faster than we are deploying the available solutions.”

But Gore’s message was not one of doom. He said he will be heading to the United Nations Climate Change Conference this weekend in Scotland, where attendees will meet to discuss limiting global temperature increases.

Gore said his nonprofit, The Climate Project, which trains people to be advocates in the fight against climate change, started 15 years ago with 50 people at his family’s farm. By this fall, he had 14,000 people sign up for the training. Gore expressed confidence throughout the conversation that people pushing governments and organizations to make the right changes is one of the most effective ways to combat the climate crisis.

The two also showed optimism about China’s efforts toward reducing emissions, with the country’s newly announced plan for net-zero emissions by 2060.

“When I started out talking to the president [of China], it was like talking to a fence post. I was like 'no way.’ But after a while — a little glimmer of interest,” Baucus said, adding that others during President Barack Obama’s presidency joined him in the effort to convince China’s president, Xi Jinping, to combat climate change.

“I've been incredibly inspired by the grassroots leadership of Indigenous communities here in the United States in standing up to oil and gas companies that have been trying to build fossil fuel pipelines over land they consider sacred,” Gore said, earning cheers and applause from the in-person audience.

Gore then addressed the feelings of hopelessness and depression many young people feel toward the climate crisis.

“My message is certainly one of empathy,” Gore said. “I know firsthand how difficult it is to watch the destruction of our planet. To continue and ask, ‘Where is the real action?’ I know that painful reality is all the more demoralizing to those whose future is at risk, but you got to remember that the best antidote to despair is action.”

“And for anybody who thinks that we don’t have the political will to do this, remember that political will itself is a renewable resource. And remember what Nelson Mandela said: ‘it always seems impossible until it’s done,’” Gore said. “We can do it, and we got to get it done.”

Baucus and Gore both said advancing technology can help limit and identify the emissions spewing into Earth’s atmosphere. Baucus said he hasn’t always been optimistic, but in the last few years he’s seen signs of hope, and one of those signs is Gore and his work to find solutions.

“We are now in the early stages of a sustainability revolution that’s developing at the scale of the industrial revolution, but coupled with the speed of the digital revolution,” Gore said. “It’s already well underway, and it’s already beginning to reshape the world."

Samuel Akem’s journey into the hearts of Griz fans

The Procrast-oscope: What excuse will you make?
Horoscopes

The Procrast-oscope: What excuse will you make?