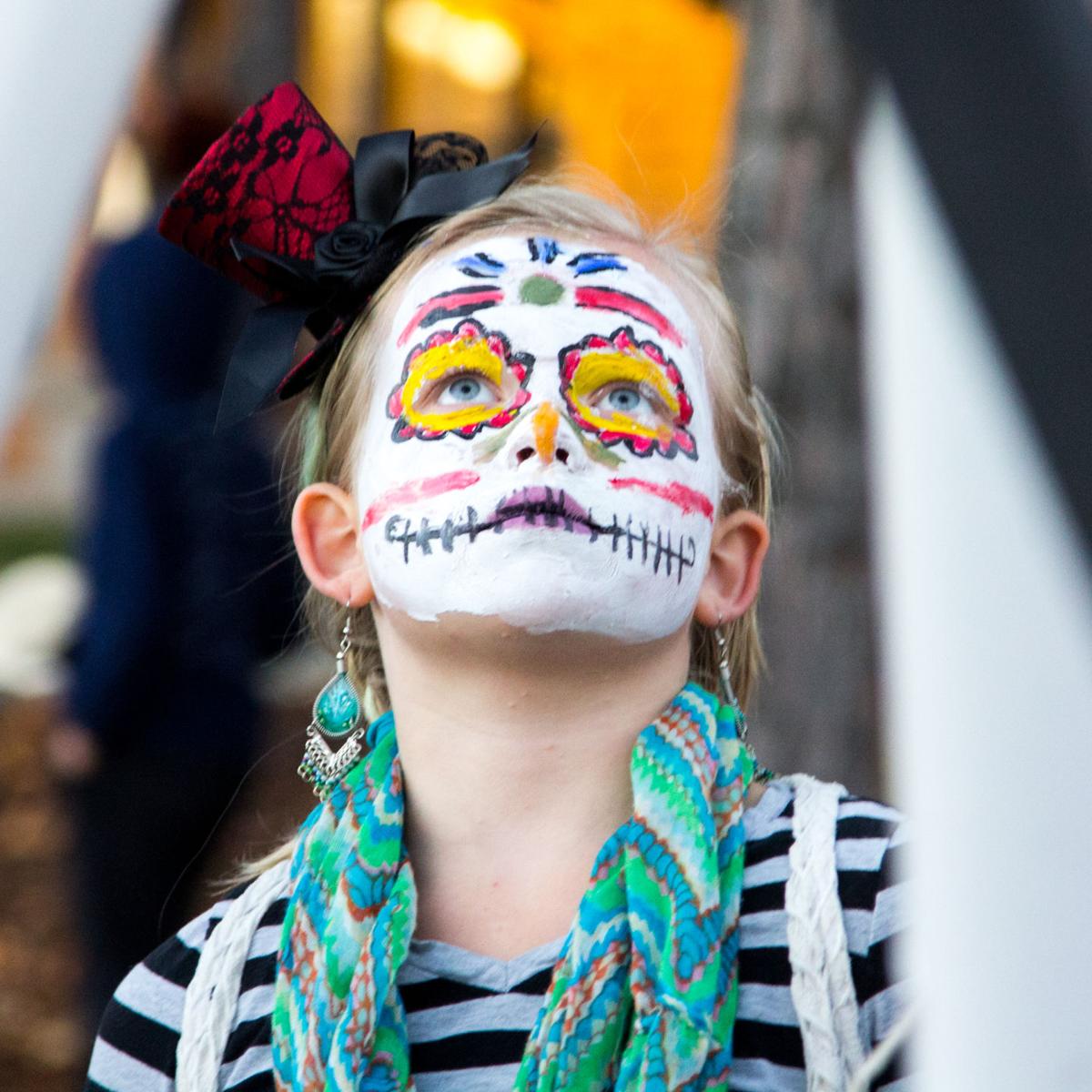 Isabella Slaughter, 9, peers up at a large skeleton during Missoula's annual Festival of the Dead parade on Wednesday, Nov. 2, 2016. 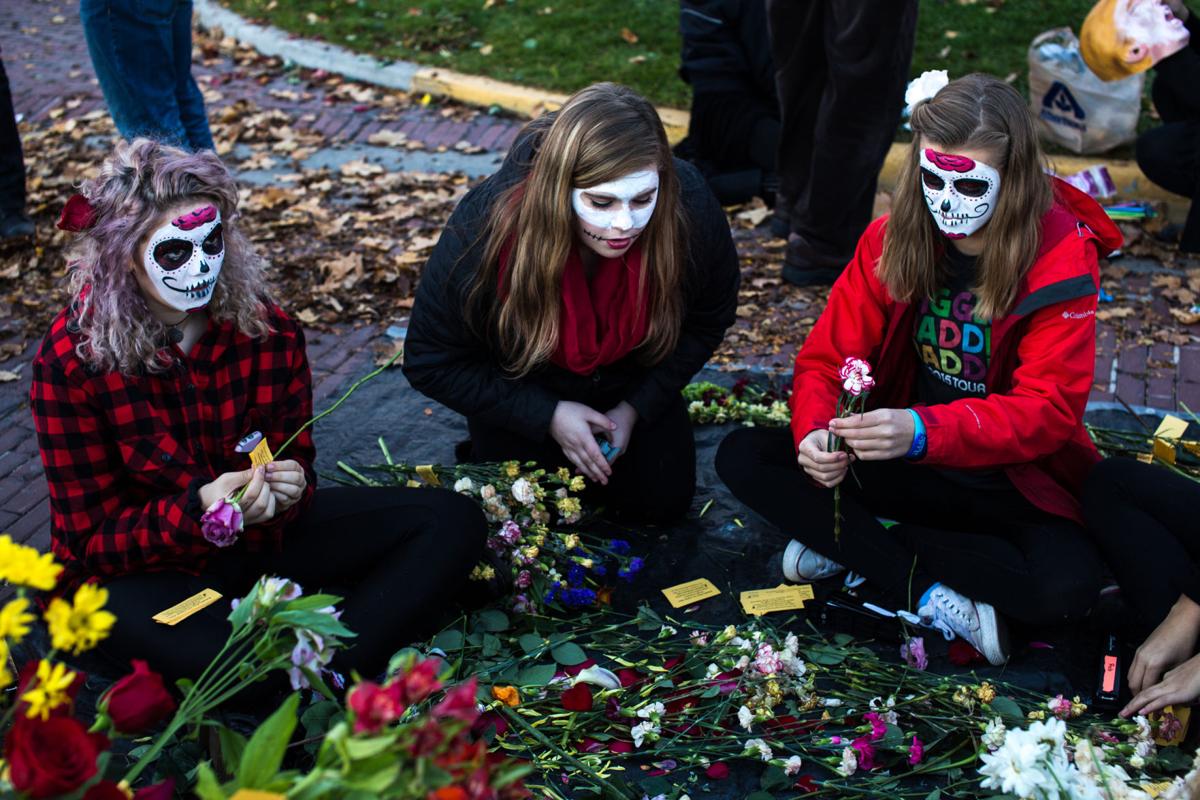 Three girls prepare flowers to hand out to parade-goers before the start of Missoula's Festival of the Dead parade on Wednesday, Nov. 2, 2016.

When graduate student Efren Duarte moved to Missoula from Sonora, Mexico almost six years ago, he was surprised an American city even celebrated Dia de los Muertos, or Day of the Dead.

He’s been to the parade every year since his move, but in mid-October, when the Missoulian reported that the Zootown Arts Community Center was planning on cutting the sugar-skull face painting workshop that precedes the parade, Duarte was confused. The workshop has defined the parade in years past, usually drawing around 350 people.

“The face painting is done because we are all the same, so we’re all the same on the Day of the Dead,” Duarte said. “We’re not remembering our own facial expressions and features; we’re trying to be the same.”

The Missoulian reported that when the ZACC started planning the festival, committee members opted not to include the face painting, due to a series of heated Facebook debates. Commenters focused on whether white people should wear sugar-skull makeup, originally a Mexican tradition.

“We felt like there was a real uprising with certain aspects of the parade,” Liszak said. “It seemed like a lot of the conversation centered around face painting and the fact that those of us who are on the festival of the dead committee are white and we’re orchestrating the painting of traditional-style face painting.”

Liszak said a lot of the conversation stemmed from the idea that the celebrations might be stealing from a culture that doesn’t belong to a majority of the white festival-goers.

“We are not going to be the ones that are painting traditional face paint on people because it’s not our culture,” Liszak said.

James Bailey, a printmaking professor at UM, has been involved in the festival almost since its inception. Bailey and a group of his art students have created large prints for the parade every year since 2000.

“To be honest, I’m not really sure why they’re pulling out [the face painting] part of it if they’re still doing all these other events,” Bailey said.

The festival activities also include making prayer flags and decorating shrines – all traditionally Mexican in origin.

Duarte thinks the problem may lie in educating the public on the idea that Mexican people celebrate the dead instead of mourning them.

Missoula’s festival was founded in 1993 when artists Michael deMeng and Bev Glueckert returned from a trip to Mexico. Instead of calling the event Dia de los Muertos, they named it Missoula’s Festival of the Dead to make the tradition uniquely Missoula.

Because Dia de los Muertos falls only two days after Halloween, many festival goers use the parade to continue their Halloween celebrations. John Kratz, a Spanish immersion teacher at the Missoula International School, suggests this may contribute to the misunderstanding.

“I mean it seems like people are getting hyped up for Halloween,” Kratz said. “I watch each float pass by and some of them approach some of the original interpretation of the holiday, but most of the floats that pass by seem like they’re more dressing and dancing and looking in a way that’s scary or gory.”

As a native Mexican, Duarte appreciates that people are excited about celebrating Dia de Los Muertos in a uniquely Missoula way.

“I think it’s perfectly fine if you want to celebrate it your own way, and you’re being respectful towards it,” Duarte said.

Although the ZACC did not offer a sugar-skull face painting workshop this year, festival organizers encouraged Missoulians to dress in whatever way felt most meaningful to them.

The ZACC will be holding a community conversation on the topic of cultural appropriation and Missoula’s Festival of the Dead on November 21. Missoulians are encouraged to voice their opinions on the topic, especially if you’re of Mexican heritage.