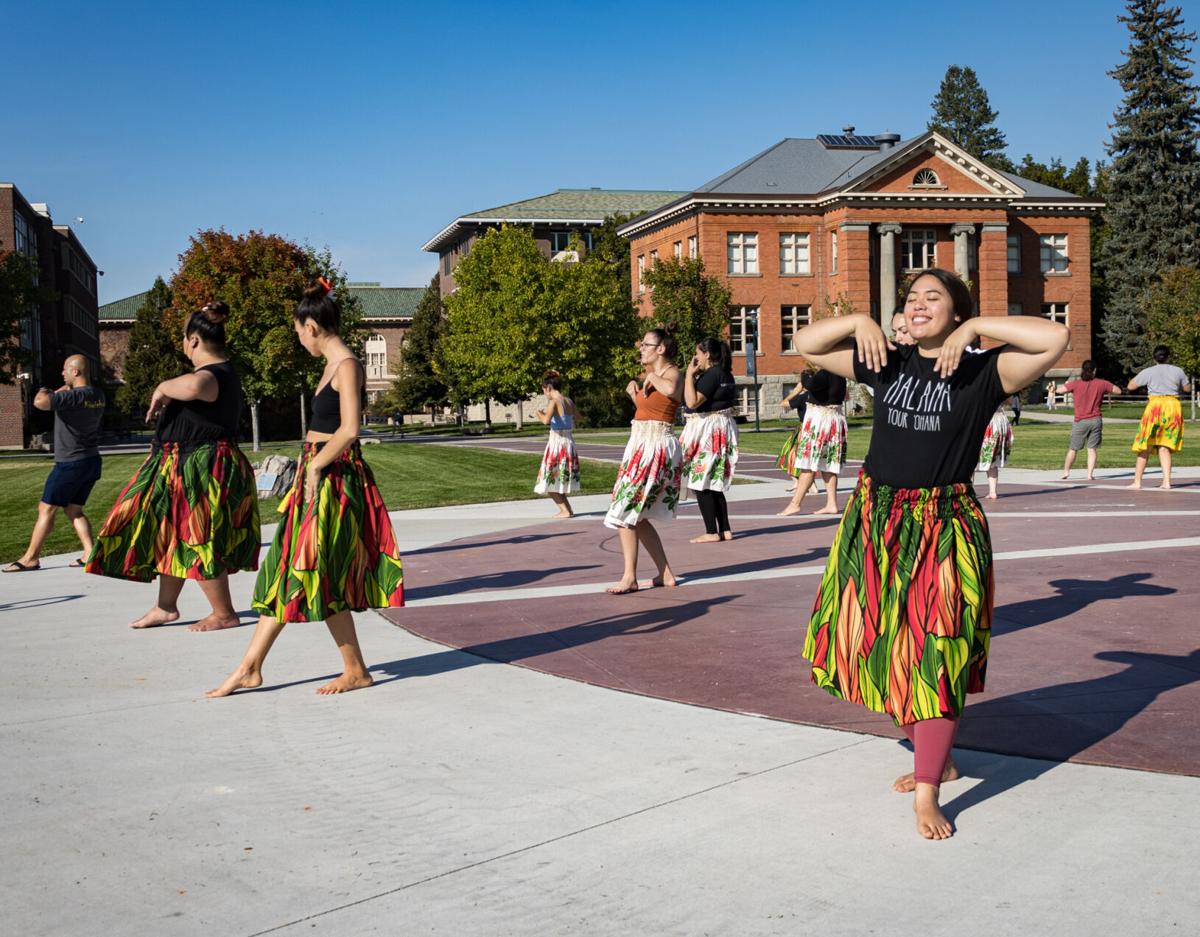 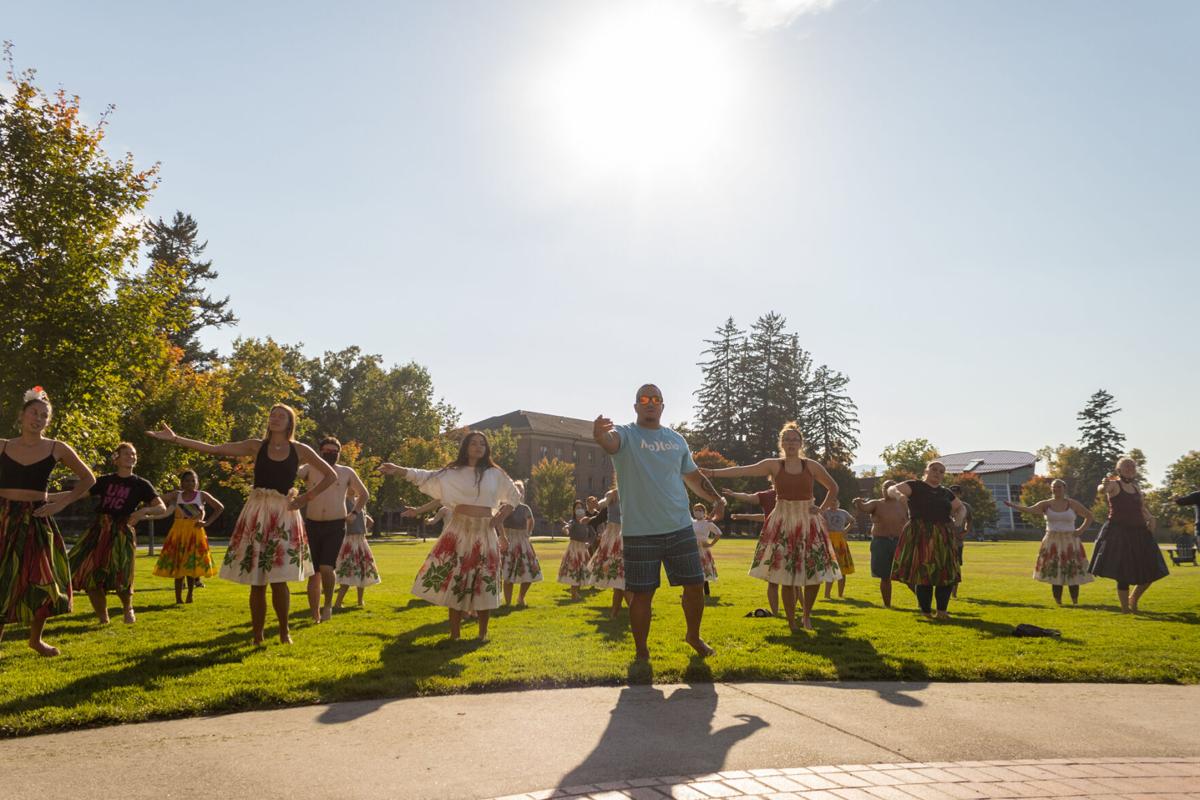 In the Branch Center kitchen sit two bags of Hawai'ian rock salt. In the freezer, there are lā’i leaves. In the cupboards are boxes of haupia — a type of coconut pudding — and mango candy. All of these were shipped from Hawai’i.

The Pacific Islanders Club uses these ingredients in regular potlucks. For the most part, they can’t be bought in Montana. Authentic Hawai’ian food uses ingredients from 2,800 miles away.

And to the club members, their food was being incorrectly appropriated by Campus Dining.

On Sept. 16, the Pacific Islanders Club Instagram posted a story calling out UM Dining for perpetuating cultural materialism. There were three main grievances.

“You know it’s Huli Huli chicken because you can smell it from the next town over,” student Ka’aumoana Ahina, co-founder and president of the Pacific Islanders Club and an Oahu native, said. “The flavor is the flavor because of how it was prepared.”

The second issue was the “Hawaiian Luau Salad” served at the Food Zoo. The story points out that it should be “Lū’au,” with the Hawaiian kahakō and ‘okina.

“Why was it named that?” Ka’aumoana asked. “Do they know and can they reference what a lū’au is?”

Lū’aus can serve as celebration, gathering, mourning and more. Ka’aumoana questioned why Campus Dining used this name for the salad, which is just a pineapple quinoa fruit salad.

“It seems as though pineapples are always associated with something that they call Hawaiian,”  Ka’aumoana said. “That’s what we’re teaching people here on our campus — throw a pineapple on it and call it good.”

Pineapples are not native to Hawai’i. The same Dole family that made an empire of Hawai’ian pineapples also had a member who helped stage a coup against Queen Liliuokalani, resulting in the takeover of Hawai’i by the United States.

The last slide condemned UM Dining’s decision to sell boba tea at Biz Buzz coffee shop. It featured a picture of the text notification letting students know of the boba tea’s availability, which involved a picture of a student holding boba tea. The student’s face is not clearly visible. The story added the text, “Dirty finger nailed ‘CaucASIAN’ culturally dehumanizing the origin of this Taiwanese staple.”

Ka’aumoana explained that the club was frustrated at UM Dining’s decision to sell its own boba tea when it knew that Pearl Boba, an Asian-owned boba store, would be opening Sept. 27. The Pacific Islanders Club felt that UM Dining was capitalizing on the demand for boba and taking business from Pearl Boba.

According to Trail Bundy, the marketing and communications manager for UM Dining, the decision to sell boba at Biz Buzz was made at the end of spring semester 2021, before UM Dining knew Pearl Boba was coming to the UC. UM Dining does a lot of trend forecasting, and wanted to provide the popular drink to students. By the time Pearl Boba came to the UC, Biz Buzz had a year’s worth of inventory to sell boba. Because Pearl Boba doesn’t sell food, it’s separate from campus dining.

In response to the Instagram story, Ka’aumoana said the student featured in the boba text filed a Title IX complaint against the club. UM’s Title IX office asked for an apology and for the club to go through advocacy training.

“That’s upsetting. That’s a stab in the heart,” Ka’aumoana said.

Ka’aumoana said the club asked Title IX to not interfere with its free speech rights and efforts to ensure student success.

Bundy said that, as soon as they were made aware of the issue on Sept. 20, UM Dining removed all references to Hawai’i from dish names, instead listing them by ingredients. The Huli Huli sandwich was a weekly special and had already ended by the time it was brought to UM Dining’s attention. Bundy said that “Huli Huli” was a reference to the sauce used. The pineapple quinoa salad is now “Tropical Salad.”

According to Bundy, the culinary team is responsible for weekly specials. There are no Pacific Islanders on that team. Many of the Food Zoo recipes are years old, so Bundy was unable to guess at where the decision to name pineapple quinoa salad “Hawaiian Luau Salad” came from or how much research was done beforehand. The dishes served at the Food Zoo are based on what ingredients are available and the culinary expertise of staff at the time.

The Pacific Islanders Club treasurer, Isaac La’a, said he confronted the manager on duty at Big Sky Burgers when he saw the “Huli Huli” sandwich, asked whose idea it was and advised them to remove it from the menu. The manager said they would tell their own manager.

“This was definitely an educational opportunity for all those involved in this,” Bundy said.

Ka’aumoana said that this issue has harmed students and distracted from the club’s goal of providing a sacred space and fostering student success.

“Their intent of doing it is ignorance, and their impact is damaging,” Ka’aumoana said. “These experiences hinder us from being successful students.”

At an Associated Students of the University of Montana meeting on Sept. 22, club members Elani Borhegyi and La’a both spoke about the issue, sharing the intentions of the club and urging UM Dining to do better. La’a is an ASUM senator.

Bundy said UM Dining has been working with the Office of Inclusive Excellence rather than reaching out to the club directly. UM Dining hopes to work with the Global Engagement Office and students to provide accurate cultural foods on campus.

“These concerns were not raised to our staff before this,” Bundy said. “All it took was a group of empowered people to bring it to our attention.”

He hopes that UM Dining can one day serve Hawai’ian food with the assistance of the Pacific Islander community.

“We want to work with them a lot closer going forward,” Bundy said.

“You don’t have to consult us before putting things out there, but do your research,” Ka’aumoana said.

“We also provide cultural learning and engagements for students,” Ka’aumoana said. “Communities are a big part of helping our students succeed. When students are away from their families, from the original place they came from, they need places like this to succeed.”

The club aims to provide ‘ohana, or family.

“The greatest joy is being able to come together and build community,” Ka’aumoana said. “The biggest joy for me is being able to see other Pacific Islanders come to this place because they feel loved, appreciated and respected.”

The potlucks don’t just feature food from the Pacific islands. In addition to poi, poke, shoyu chicken, butter mochi and kalua pig with cabbage, students provided kimchi and vegan goulash. The poi is made with ingredients from the islands, such as tarot starch, and the food is seasoned with Hawai’ian salt harvested from the island of Kaua’i. The club also orders mango soft jelly candy from Hawai’i.

“Nobody thinks about these things,” Ka’aumoana said. “It boils down to the actual ingredients of preparation.”

“I love attending potlucks and getting to share culture,” said Borhegyi, who joined the club two years ago. Borhegyi is not a Pacific Islander, but has found community in the club after being recruited at Welcome Feast.

Borhegyi brought goulash to the potluck to share their Eastern European culture. They said they saw the “Hawaiian Luau Salad” their freshman year, and regretted not reacting sooner.

“I’ve been awakened to how many instances of cultural appropriation there are at UM Dining,” Borhegyi said. “Even if you’re not aware, you have a responsibility to serve food that is authentic and respects where it comes from.”

In addition to meetings and potlucks, the Pacific Islanders Club holds hula practice in the UC ballroom every Sunday from 3 p.m. to 5 p.m. These practices don’t just draw Pacific Islanders.

On Sept. 26, about 30 people practiced to perform on the Oval for Indigenous Peoples’ Day on Oct. 11. Ka’aumoana led the practice. In hula, “huli” is a type of turn.

“With the Pacific Islanders Club, it feels like you’re a part of ‘ohana,” Borhegyi said.

They especially felt that sense of community at hula practice. Borhegyi said they started out bad at hula, but improved a lot.

“I’m not a religious person, but hula is like, in a metaphor sense, my church,” La’a said. “My way to express myself to the moon, the stars, the trees, the grass, the Earth.”