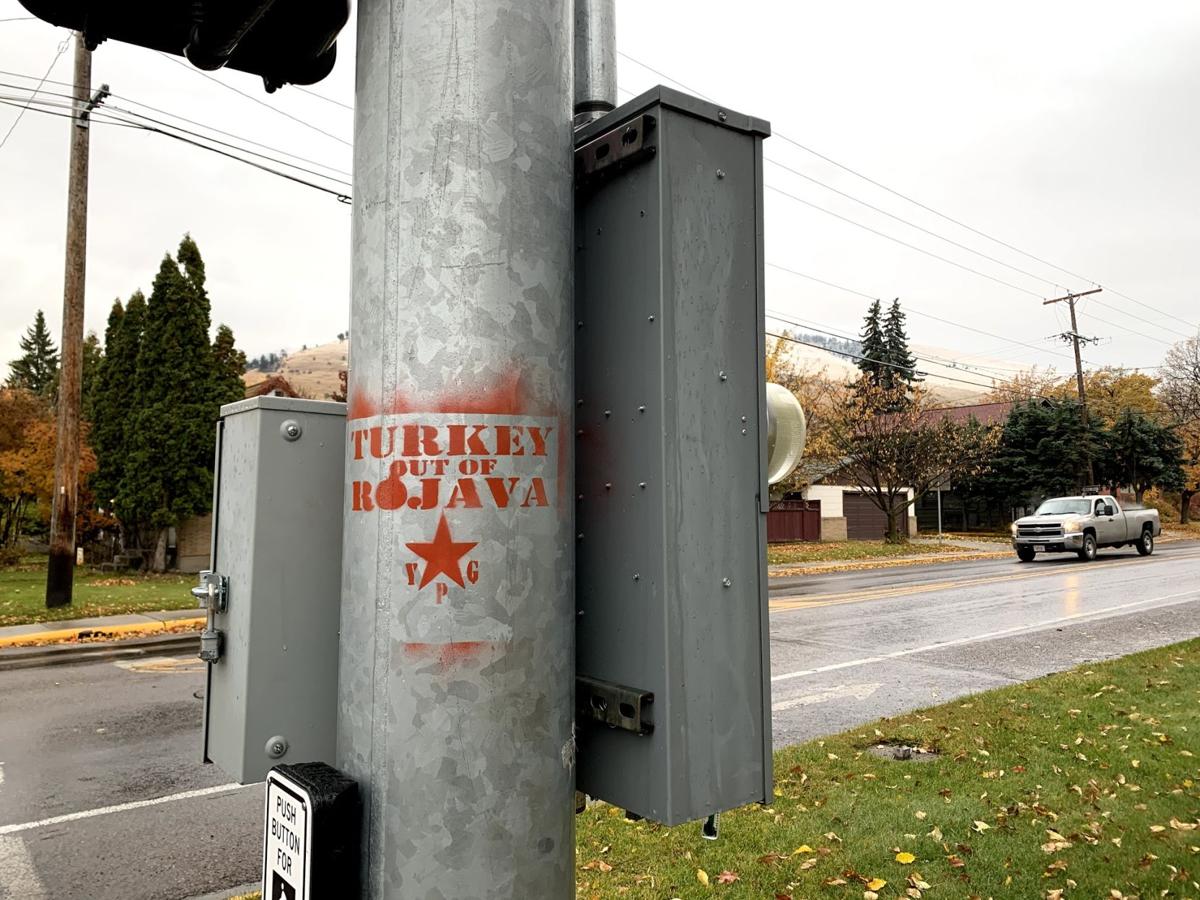 Stenciling in support of removing Turkish forces from Rojava on a light post at the corner of 6th Street and Arthur Avenue near campus on Oct. 21, 2019. 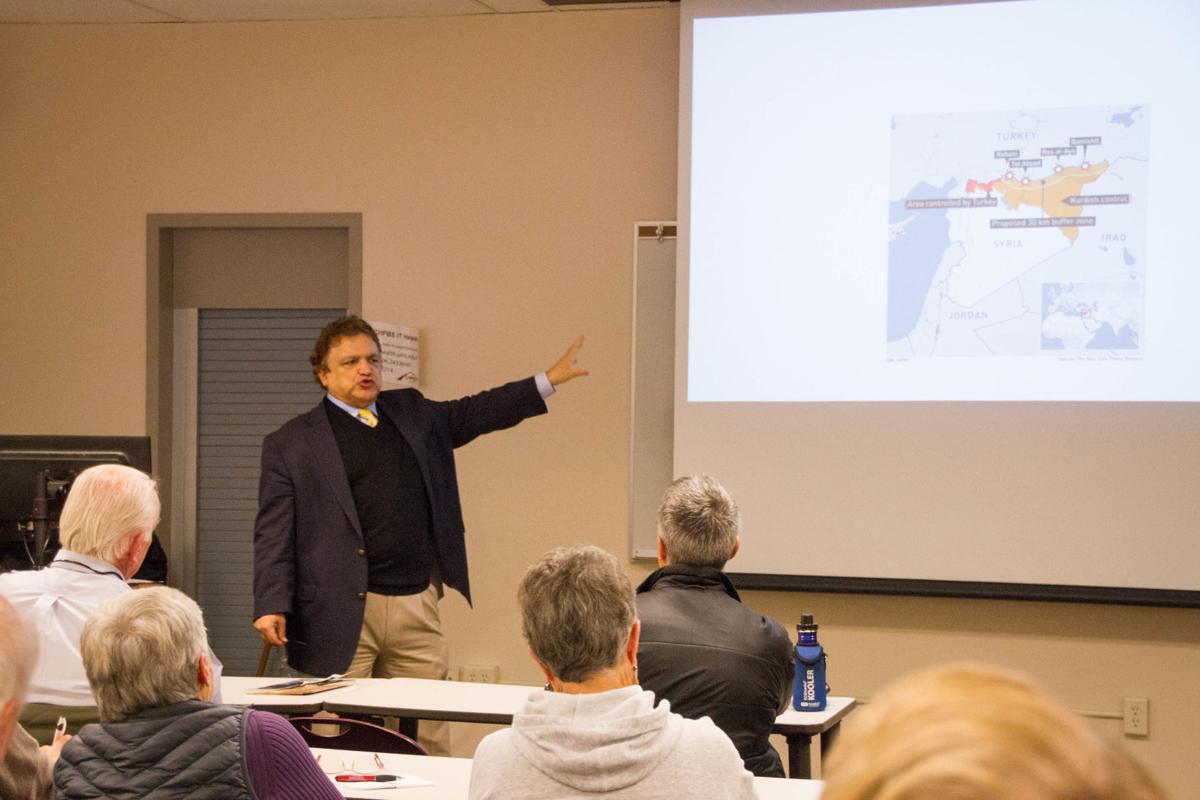 Professor Mehrdad Kia motions to a highlighted map of Kurdistan during his talk on Oct. 21, 2019. Kia discussed Turkey's invasion of Syria, the background and potential future of the Kurds and the overall tension in the Persian Gulf.

Dozens of Missoula residents and University of Montana students met on campus Monday for a presentation on how, 6,500 miles away, U.S. troops came to be pelted with potatoes by Kurds as they withdrew from northern Syria.

Mehrdad Kia, a UM professor of history and director of the Central and Southwest Asian Studies Center, and the Montana World Affairs Council, hosted the discussion after a demand arose for a historical perspective of  U.S. presence in Syria, and the Turkish invasion of its northeastern region in early October.

“What we are seeing is the death of the Arab Spring,” Kia said in an interview prior to the event, referring to the 2011 uprisings in Syria and across North Africa against despotic regimes.

The death of the Arab Spring, according to Kia, has its roots in the partitioning of the former Ottoman Empire nearly a century prior.

The Islamic State of Iraq and Syria (ISIS) rose from the fallout of the Syrian Civil War that began in 2011 when popular protests dissolved into open combat. From its base in eastern Syria, Kia said, ISIS swarmed over the region. By 2015, the self-proclaimed caliphate controlled swaths of Iraq and Syria. Along the way, its members terrorized civilians with public beheadings, crucifixions and burning them alive.

As the Syrians fell into a failed state, along with Iraqi forces, one group managed to beat back the wave of violence: Kurdish fighters in the mountainous regions of northeastern Syria, Northern Iraq and into Iran. When the U.S. needed allies in dismantling ISIS, only the Kurds proved capable enough to press any kind of real offensive. In the war against the Islamic State, over 11,000 Kurdish fighters died.

Culturally, linguistically and often religiously distinct from the Sunni nations of the west and Shia Iran, the Kurds have been present in the region for the past 5,000 years. Those same divisions among themselves, according to Kia, have also prevented the 23 million of the region from developing any kind of unified state.

15 million of those Kurds, Kia said, live in Turkey. Over the past 30 years, a growing movement for more Kurdish autonomy in the southeastern part has erupted into violence. The PKK, the Kurdistan Workers’ Party, has been listed as a terrorist organization by both Ankara and the CIA.

By 2019, ISIS had been effectively defeated, and, according to Kia, Turkish President Recep Tayyip Erdogan had a potential revolution threatening his own country. In the fear of an autonomous, independent Kurdish region at his southeastern border, he pushed the Turkish military into Syria after clearing the operation with President Donald Trump.

Trump obliged Turkey, a NATO ally and recipient of over $150 million in annual foreign aid, in pulling out those U.S. service members in Kurdish Rojava. Despondent Kurds, according to the Associated Press, hurled potatoes at U.S. convoys as they made their way to new positions deeper into Syria and Iraq.

Ostensibly, Turkish troops entered the region to clear the area for 3.6 million Syrian refugees that flooded into the country during the past eight years. However, Kia said, those mostly Sunni Arab refugees would also create a buffer between the Kurds and the Turkish border.

“We’re seeing Turkey doing now what the British and the French did 100 years ago. They’re redrawing the demographic map by draining the area of its Kurdish population,” he said.

With little more than a week’s notice, enough word got out to pack the room in the Skaggs Building to the door. During that same time, the Turks reached a ceasefire after negotiations with the Assad regime in Syria, and Russia. President Bashar al-Assad, who Kia said was thought to be effectively deposed, has reemerged as a possible ally of the Kurds in the wake of the American exit.

“It’s an incredibly complex situation. It seems like if you pull one string, you pull five,” said sophomore Stormy Kipp, a student of Kia’s who attended the event.

“You definitely need a lot more than an hour to understand what’s happening there, but it gave me a lot more perspective. I think the biggest takeaway from today is broadening how you watch the news, and not being too ethnocentric about what you see," Kipp said.

Along with the call from students and residents for a better understanding of the matter, aftershocks of the catastrophe of the Syrian civil war reached Missoula in the form of several refugees from the region who have resettled here since 2016.

On the crosswalk for the parking lot near Miller Hall, stenciled in red paint, a sign reads “Turkey Out of Rojava.” On a stoplight at the intersection of Arthur and Beckwith, more red letters spell “STAND WITH KURDISTAN.”

“We might want to think that we are living in the isolation of the mountains and we’re not going to be impacted like Seattle or Los Angeles or New York, but sooner or later, it will come to us. It’s much better to have an educated and aware community knowing what is coming, than being shocked and surprised,” Kia said.