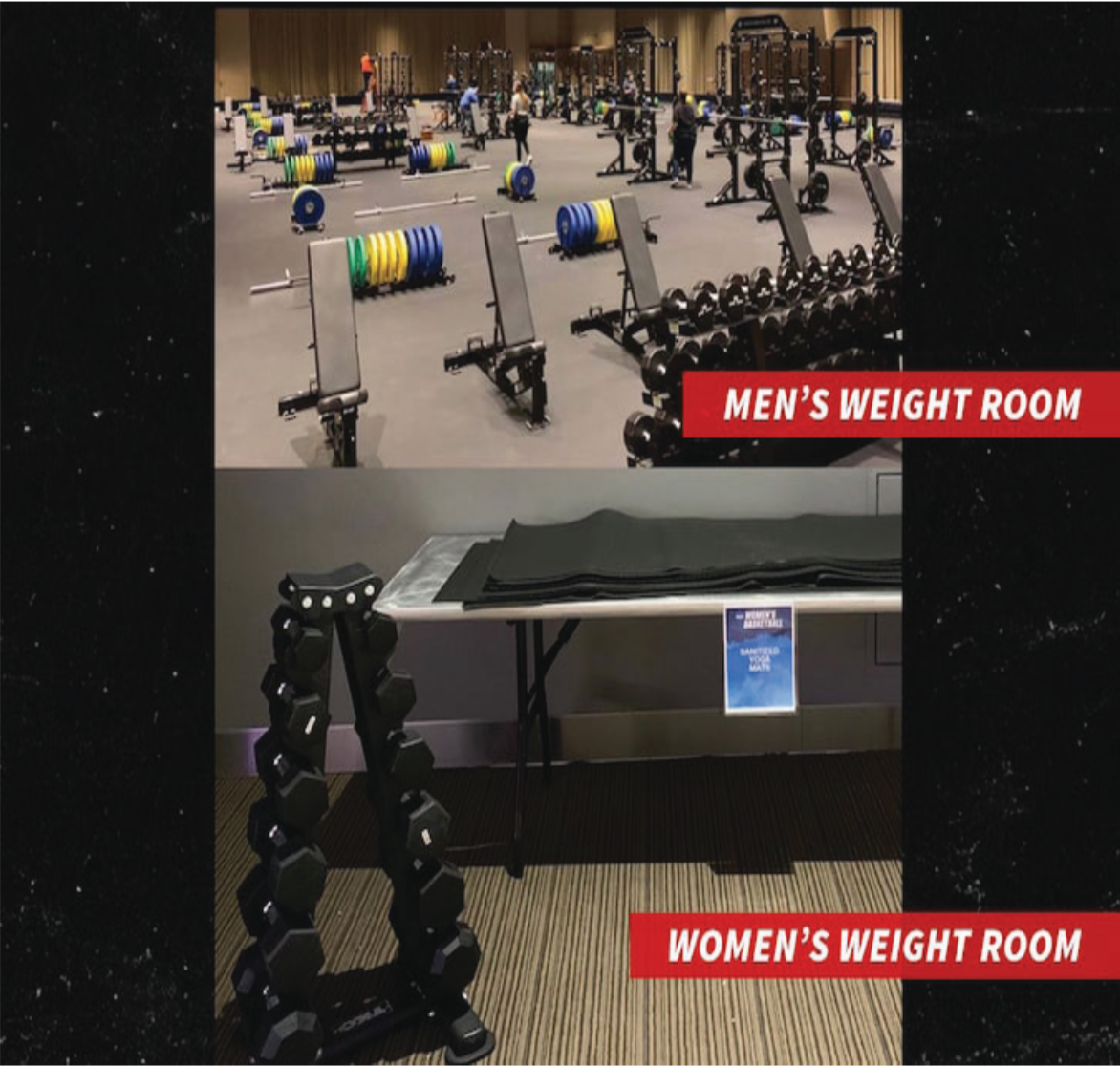 Social media posts from the players in the men’s and women’s college basketball bubbles seen on TMZ Sports’s website show discrepancies in the equipment available to athletes. Players and coaches also called into question the quality of food and gift bags given to the women’s players compared to the men’s.

During one of NCAA’s most profitable events of the entire year, the NCAA basketball tournament, the men’s players received a state-of-the-art weight room filled with racks of dumbbells, plenty of multicolored weighted plates and stations to do a variety of workouts. But for the women’s teams, (and during Womens’ History Month) the NCAA provided players a sad, singular rack of dumbbells and some sanitized yoga mats.

“I felt like it had to be a joke,” said Elizabeth Hubble, the director of the University of Montana’s Women’s, Gender and Sexuality Studies Program. “Why would you do that now, when there is so much focus on [the NCAA tournament].”

The University of Montana’s women’s basketball team didn’t make it to the tournament this year, but 68 other teams did. Those 68 teams, full of hard working student athletes, don’t deserve the treatment they are getting in the tournament from the NCAA.

In both the men and women’s brackets, the student athletes are in bubbles where the NCAA provides them with food, practice courts, toiletries and other basic needs. The men’s bubble is based in Indianapolis while the women’s is in San Antonio.

You’ve probably seen some sexist young male post on social media that women’s basketball players don’t get as many resources because they don’t generate as much money. This may be true for professional sports, but when it comes to the NCAA, this thought pattern is wrong and harmful.

The NCAA is required to put forth the same amount of money towards men’s and women’s basketball according to Title IX. Unfortunately, the NCAA doesn’t follow Title IX and give its athletes equal rights because… well… the NCAA is stupid.

Hubble says that universities and organizations are often only required to “show that they are trying to abide by Title IX” and don’t actually have to follow it. In this case, the NCAA didn’t even try to show that it was abiding by Title IX; it ignored it.

The men’s basketball players received a blanket, a sweatshirt, a hat, a t-shirt, 16 different hygiene products, a book, a pair of socks, a puzzle and a few more assorted March Madness themed items. The women’s basketball players received a pillowcase, two water bottles, a t-shirt, an umbrella, six hygiene products, a pair of socks, a hat, a scrunchie and a set of playing cards.

While the men had numerous hygiene products and even a full-size wall poster, the women’s basketball players were stuck with a weird variety of semi-useful gifts.

This gift-giving fest by the NCAA seemed as if it was a bad joke, but then the athletes began receiving meals. Basketball players in the bubbles quickly realized that while the men were receiving buffet-style catered meals, the women were getting plastic containers full of unseasoned and borderline inedible meals.

The issue that really brought these bubble injustices to light was the previously mentioned workout areas. The wimpy set of dumbbells given to the best collegiate women’s basketball players received national backlash. But it’s OK, the NCAA vice president of women’s basketball Lynn Holzman came out with a statement.

“This is due to limited space,” part of Holzman’s statement read. “The original plan was to expand the workout area.”

A deserving, but blatantly untrue apology. Pictures posted online after the statement clearly showed empty space in the bubble where a larger workout area could have been built.

A few days later, the NCAA established a suitable weight room for some of our country’s finest athletes, but it was too late. The NCAA showed blatant misogyny.

“We live in a time where athletes aren’t putting up with it anymore, which I think is a hugely important thing,”  Hubble said.

If college athletes aren’t benefiting financially off of this million dollar event, they should at least be treated with respect. Women have battled for years and years to get equal pay, representation and opportunities in sports.

While there has been a professional basketball league for men since the 1940s, the Women’s National Basketball Association wasn’t started until 1996. The United States women’s national team has won four World Cups while the men have never even made it to the finals, yet U.S. women’s players are still advocating for equal pay.

What the NCAA did this March wasn’t a mistake. It was a continuation of a pattern of disrespect and disregard for women in sports.