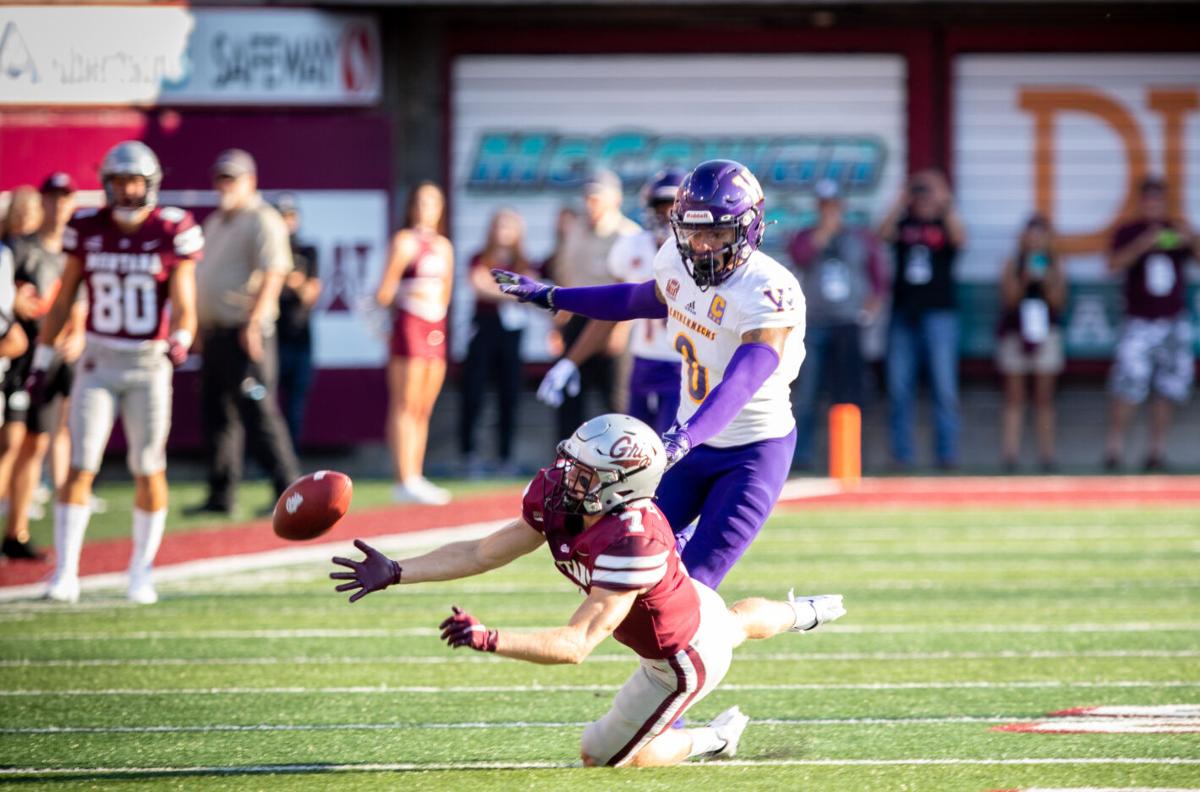 Montana freshman wide receiver Gabe Sulser dives and makes a diving catch in the second quarter as the Griz take on Western Illinois at Washington-Grizzly Stadium on Sept. 11. The Montana Griz came out strong and finished the night with a 42-7 win over Western Illinois. 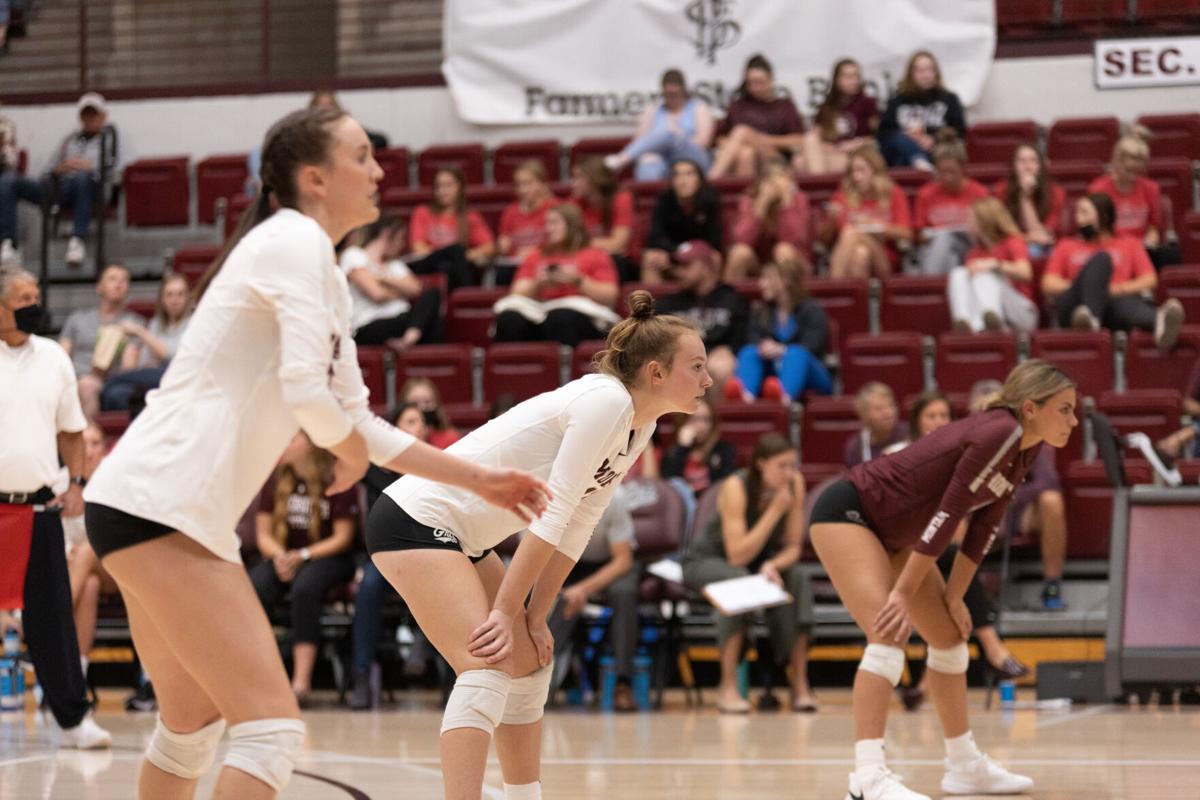 University of Montana volleyball players prepare for a serve during a game against Seattle University on Sept. 1. Griz volleyball ended the evening with a 3-2 win over Seattle. The Griz will face Montana State University in the Brawl of the Wild at Dahlberg Arena on Sept. 21. 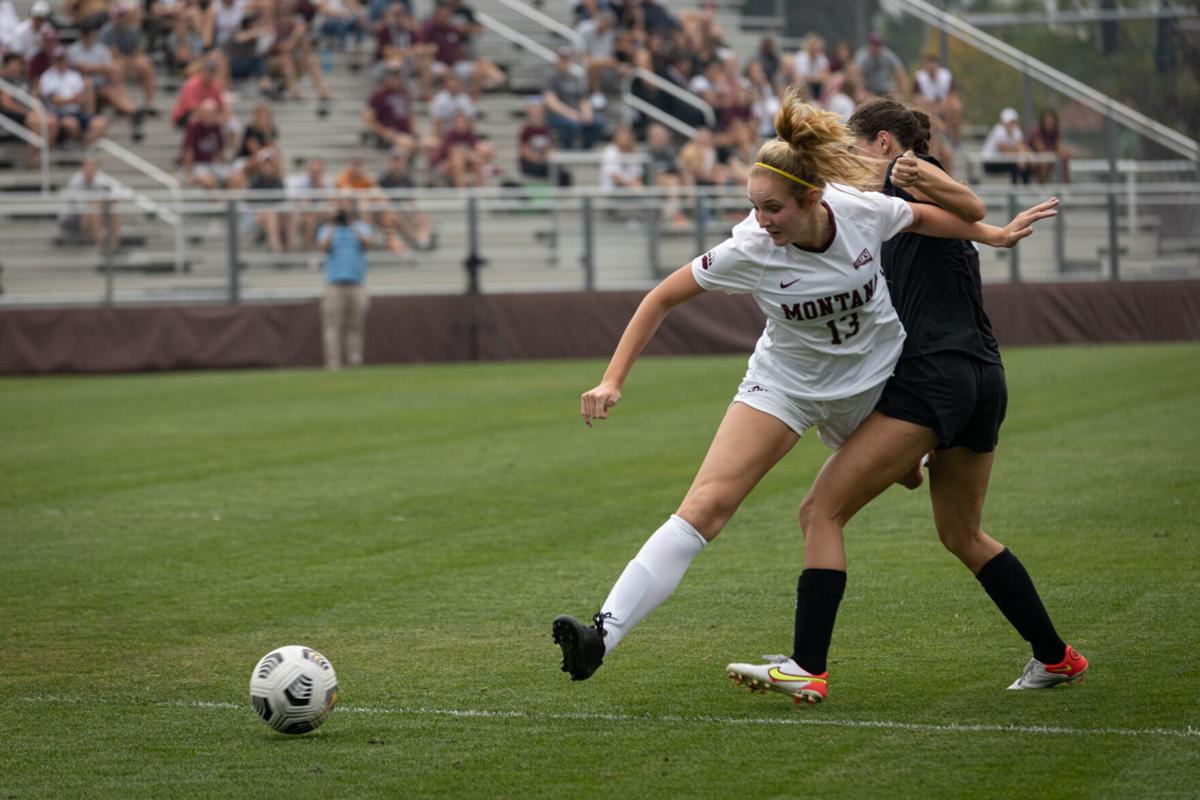 Montana freshman forward Delaney Lou Schorr blocks a Texas Southern player and scrambles to to get to the ball first during a match on Sept. 10. Montana came out on top with a strong 6-0 victory over Texas Southern.

The University of Montana volleyball team traveled to Cheney, Washington Sept. 18 for its final non-conference game of the season, a 0-3 loss to California State University-Bakersfield.

CSU-Bakersfield came into the game with a 6-1 record on the season while Montana came in with a 5-4 record. It was the final non-conference game for both teams.

The first set was competitive and UM took CSU-Bakersfield down to the wire, but the Roadrunners eventually downed the Griz, 24-26. A big part of Montana’s defensive effort was the play of senior defensive specialist Sarina Moreno, who had 14 digs and five assists.

The second set was also close, but once again CSU-Bakersfield prevailed, winning 20-25.

The Roadrunners dominated the Griz in nearly every statistical category, but one place UM performed well in was serving. Montana had five service aces compared to CSU-Bakersfield’s four. Junior outside hitter Jackie Howell had three of UM’s aces, while Moreno notched two.

CSU-Bakersfield dominated the final set, winning 25-12 and taking the match 3-0.

Montana’s offense came primarily from junior Catie Semadeni and sophomore Ellie Scherffius, who both had 10 kills. Scherffius had four blocks while Semadeni had three.

UM will take on Montana State Sept. 21 at home. The Kaimin Sports Twitter will provide live coverage of the game. Follow along @KaiminSports.

The momentum of the game, which was scoreless at the time, shifted. The Griz attack came to life. UM fifth-year senior forward Taylor Stoeger gained possession of the ball and sent it in between two Long Beach State defenders. On the back end of Stoeger’s pass was junior Sydney Haustien, who had nothing but green in front of her.

After a few dribbles, Haustien shot the ball just to the left of Long Beach State’s goalie and found the net, giving UM a 1-0 lead. Montana’s lead persisted through the rest of the game and gave UM a victory in its final non-conference game.

“In 2023 when they (LBSU) come back here (Missoula), it will be personal,” said UM head coach Chris Citowicki. “I am positive that they want revenge.”

Long Beach State outshot Montana in the game, racking up 26 attempts compared to UM’s four. But out of Beach’s 26 shots, only six of them were on target. Three of UM’s four shots were on target.

Xu had six saves in the game and collected her fourth shutout in the last five games. Because of her performance, Xu was named the Big Sky Conference Defensive Player of the Week Sept. 21.

“In my time here we’ve never had a more successful non-conference slate,” Citowicki said. “It’s really nice to be in this position.”

Montana will begin its conference play in Flagstaff, Arizona, against Northern Arizona on Sept. 24. Northern Arizona and UM were supposed to face off in last spring’s Big Sky Championship, but NAU had to cancel due to issues with COVID-19.

The Montana men’s cross country team competed in its second meet of the season at the Montana State Classic Sept. 18 and finished third out of four teams. The UM women’s team also competed at the event, held in Bozeman, and placed fifth out of five teams.

Redshirt junior Joel Mendez finished in the highest position out of any runner on the men’s team, at 11th.

"He did really well. After the first mile he moved up about 15 spots," UM head coach Clint May told UM Athletics. "The guys who were in front of him are good runners, so at some point you're not going to keep catching people. He did a great job."

Junior Bridget Boyle was the top finisher for the UM women’s team, finishing in 49th place.

"We're youthful, but it was still a rough day," May said. "The times weren't very strong.”

Both teams will compete at the Montana open in Missoula on Sept. 28.

Montana football had a bye week and did not play any games over the weekend. UM’s opponent for the upcoming week, Cal Poly, played South Dakota at home and lost 14-48.

Cal Poly will be 1-2 coming into the matchup, while the Griz will be a perfect 2-0. First year head coach Beau Baldwin is at the helm for the Mustangs.

Baldwin came to Cal Poly after coaching stints at Eastern Washington and Cal. Baldwin has changed Cal Poly’s into a modernized passing offense after the Mustangs of prior years ran the triple option rushing offense.

When UM head coach Bobby Hauck was asked if he was excited to not have to go against the triple option offense any more, he said he was “exceedingly pleased.”

UM’s game will be its homecoming game and its first in-conference match-up on Sept. 25 at home. There is no rain in the weather forecast for Sept. 25, but UM’s homecoming parade was canceled anyway because of road-block concerns.

This story was updated to accurately reflect Sally Weaver's new role at the law school and clarify the details of UM's investigation. Read more

More than 100 people gathered in front of UM’s Main Hall at noon Friday to call for the resignation or firing of Rob Smith, whose blog filled with misogynistic writings sparked outrage after its contents were published in the Kaimin. Read more

BREAKING: Standing shoulder-to-shoulder with their peers to their sides, University of Montana students Asher Swan, left, and Erin Heaton chant "Fire Rob Smith" and wave signs during a student-led Fire Rob Smith Rally outside the steps of Main Hall on Oct. 15. More than a 100 Students gather… Read more