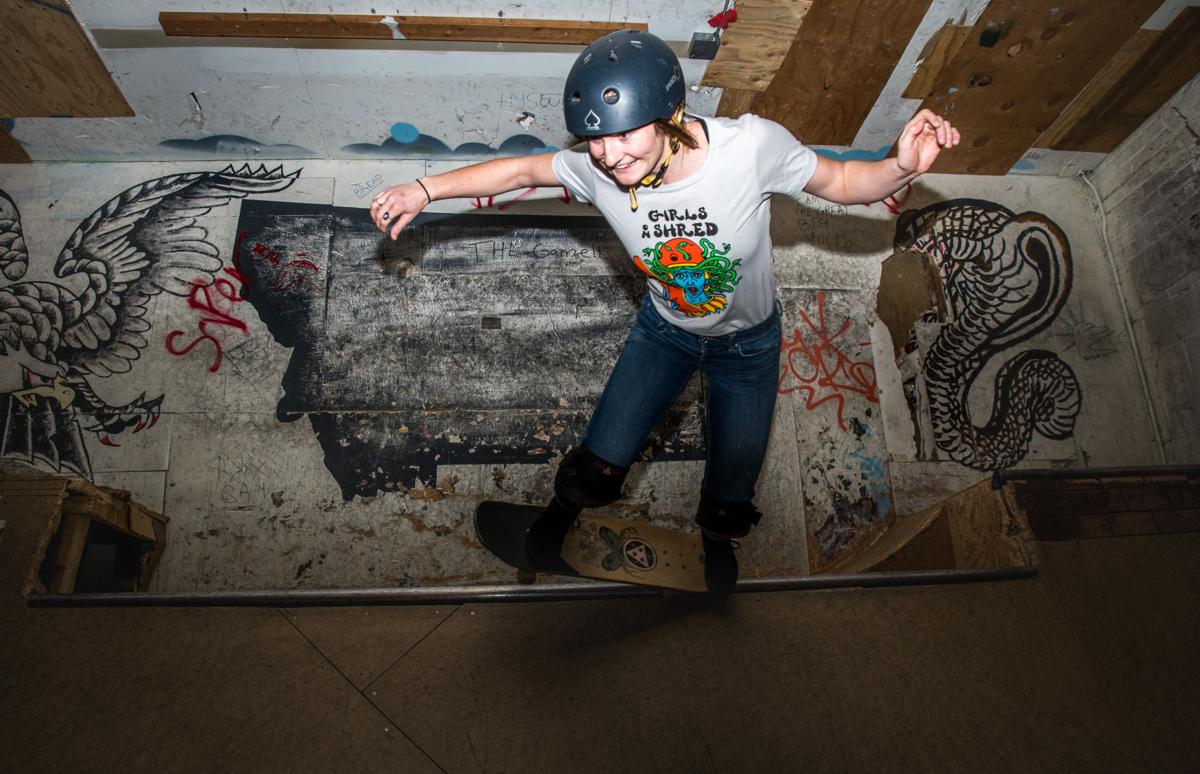 Creel, a UM student, does a 5-0 slash on the mini-ramp in the back of Board of Missoula. A 5-0 slash is when the skateboarder balances on their back truck, lifting their front truck, and grinds on the metal ramp coping. 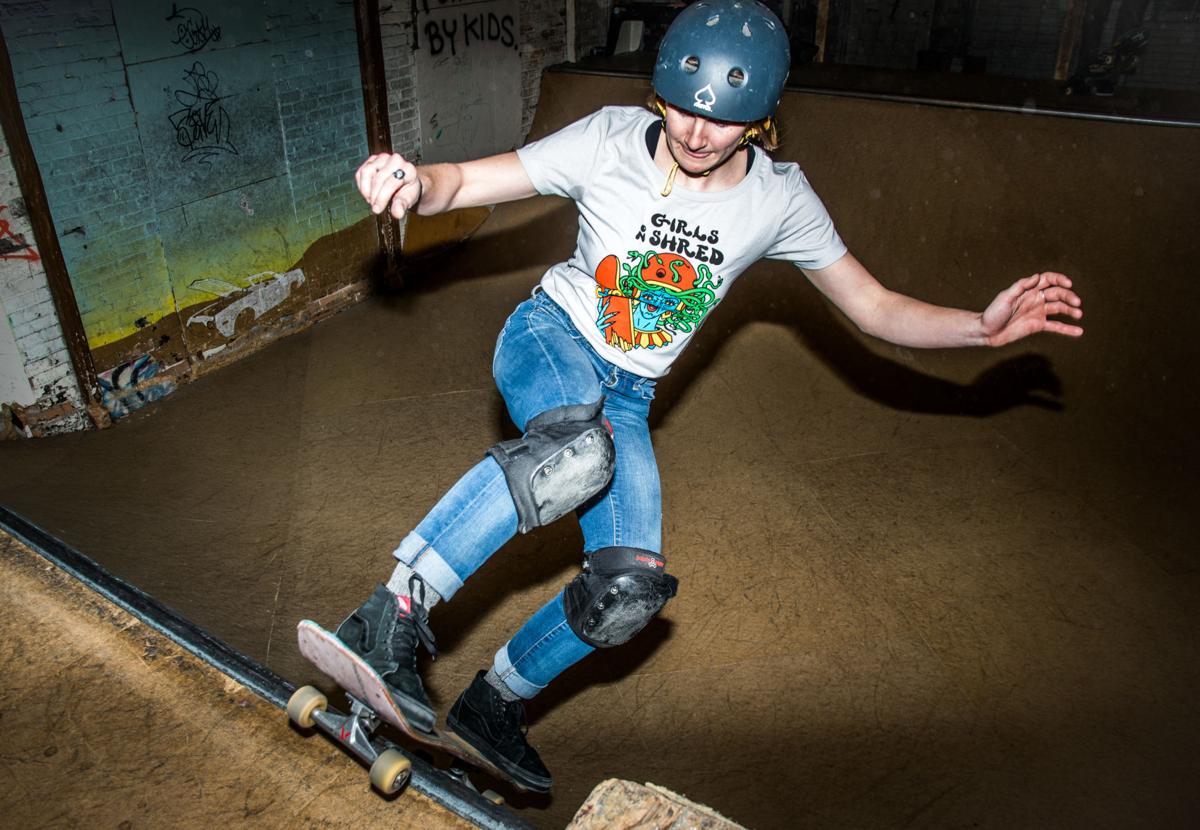 Creel does a "rock to fakie," a trick where the front truck is rocked over the metal lip of the ramp before coming back down backwards, or fakie. 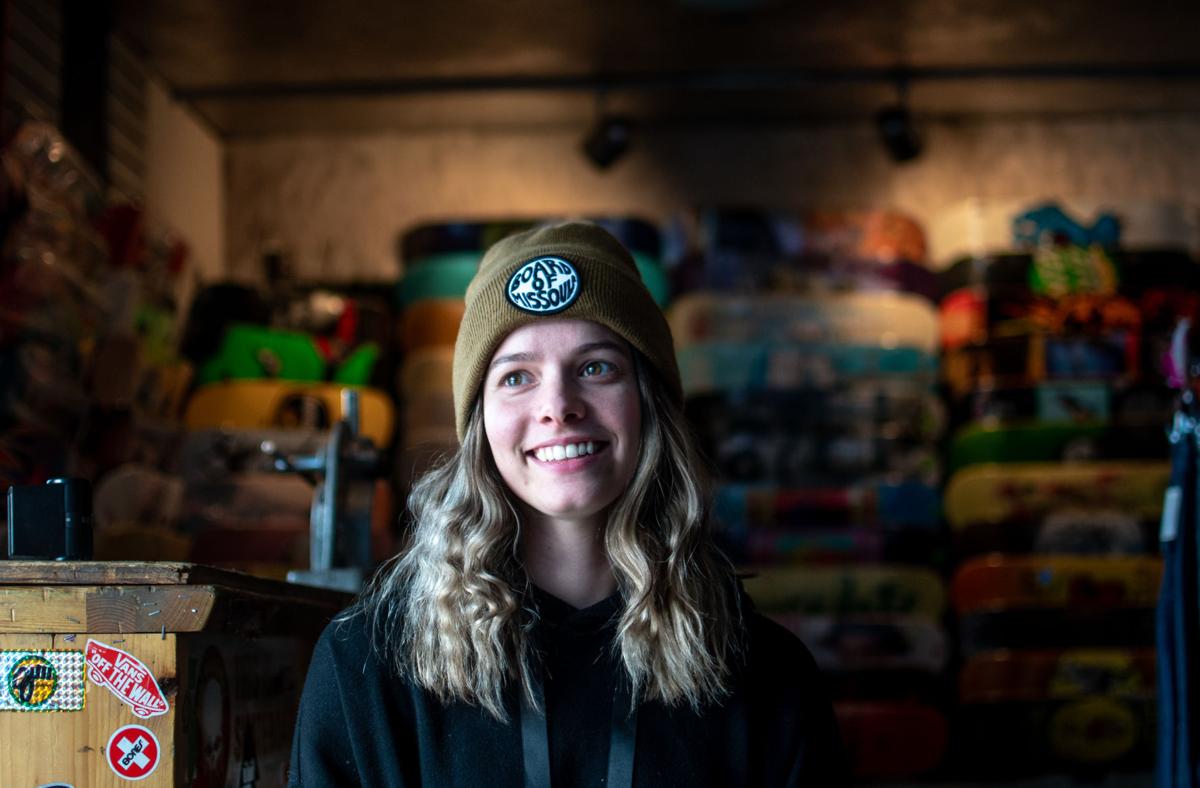 Sam Veysey Gibbons is the event manager for Girls on Shred. She took over the group after its first three years and has been doing it for six since then.

Skate decks, posters and snowboarding gear fills the walls of Board of Missoula. A video console is tucked next to the changing rooms and a miniramp with plywood features, surrounded by colorful graffiti sits behind a door at the back of the shop.

Board of Missoula and local skateparks are typically filled with men. But Girls on Shred, a women-run skating and snowboarding club, is claiming space for Missoula women to step into skateparks and ski down mountains.

The club was started by the wife of Board of Missoula’s previous owner nine years ago. Samantha Veysey Gibbons, shop manager, took it over six years ago. Since then, the club has been hosting monthly skate and snowboarding events. In the past few years, it has partnered with local businesses, women’s brands and local ski mountains to extend its reach. A few years ago, the club started hosting skate clinics.

Paging through Thrasher magazines in the shop, not a single woman skater pops off the pages. Gibbons said the industry is struggling to become more inclusive. “It can be a very judgmental space sometimes,” Gibbons said.

“It’s nice to see girls in a place where they can flourish and be themselves and not worry what someone is thinking about them,” Gibbons said of Girls on Shred events.

Gibbons grew up skating with boys and learned to snowboard on the East Coast. In middle school, she remembers her boyfriend leaving her crying half way up the bunny hill. Frustrated and at a loss, she got down on her own, ditched the boyfriend, and vowed to never let that happen again.

When she moved to Missoula, Gibbons wanted to skate with women, but struggled to find the connections.

She said she was nervous to organize the first few Girls on Shred events, but positive feedback about instruction offered at the clinics and building connections kept Gibbons excited and engaged about the club.

“There is a whole different vibe when you ride with women. You look up to your right and left and up and down the hill, and it is powerful females sharing in a collective joy. And it’s not competitive at all,” Gibbons said.

The in-city events take over the skate park which shoos away some of the more intimidating male regulars, Gibbons said. The clinics have opened up space for young girls to get involved with a sport they otherwise might have avoided.

“But if you are surrounded by woman saying, ‘Yeah that was so wicked do it again, and here’s some free pads for the day’ it makes people feel like they can make mistakes,” Gibbons said.

Bridget Creel, a UM senior studying ecology, started skating two years ago and got involved with Girls on Shred this winter. Creel said it’s easy to feel scrutinized at the skatepark. On March 7, she was the only woman dropping into the mini-ramp in the back of Board of Missoula.

“It’s kinda rare to run into another girl without coordinating meeting her [to skate],” Creel said.

Gibbons loves seeing mother-daughter duos come to the clinics. Mothers get back into the sport while their daughters get into it for the first time.

The rules — no friends on powder days, shredding to the max, all double black diamonds — don’t apply to Girls on Shred days. Gibbons is often surprised when members ditch a foot of fresh powder to slam on ramps and jumps in the terrain park together at Lost Trail Powder Mountain, which sponsors some of their events.

Gibbons said she has seen small growth to the female skating and snowboarding communities. “We keep getting more and more friends across Montana,” Gibbons said. Gibbons calls Girls on Shred the “OG” of women -led shred organizations. There are few around the U.S. that are as old as Missoula’s.

“It’s all about baby by steps,” Gibbons said. “We are trying to bring people into the larger community in a less intimidating way.”

“It’s really freeing. It’s fun, and I always walk away with new friends and sore cheeks from smiling and giggling,” Gibbons said.

Girls on Shred’s next event will be at Lost Trail on March 31.