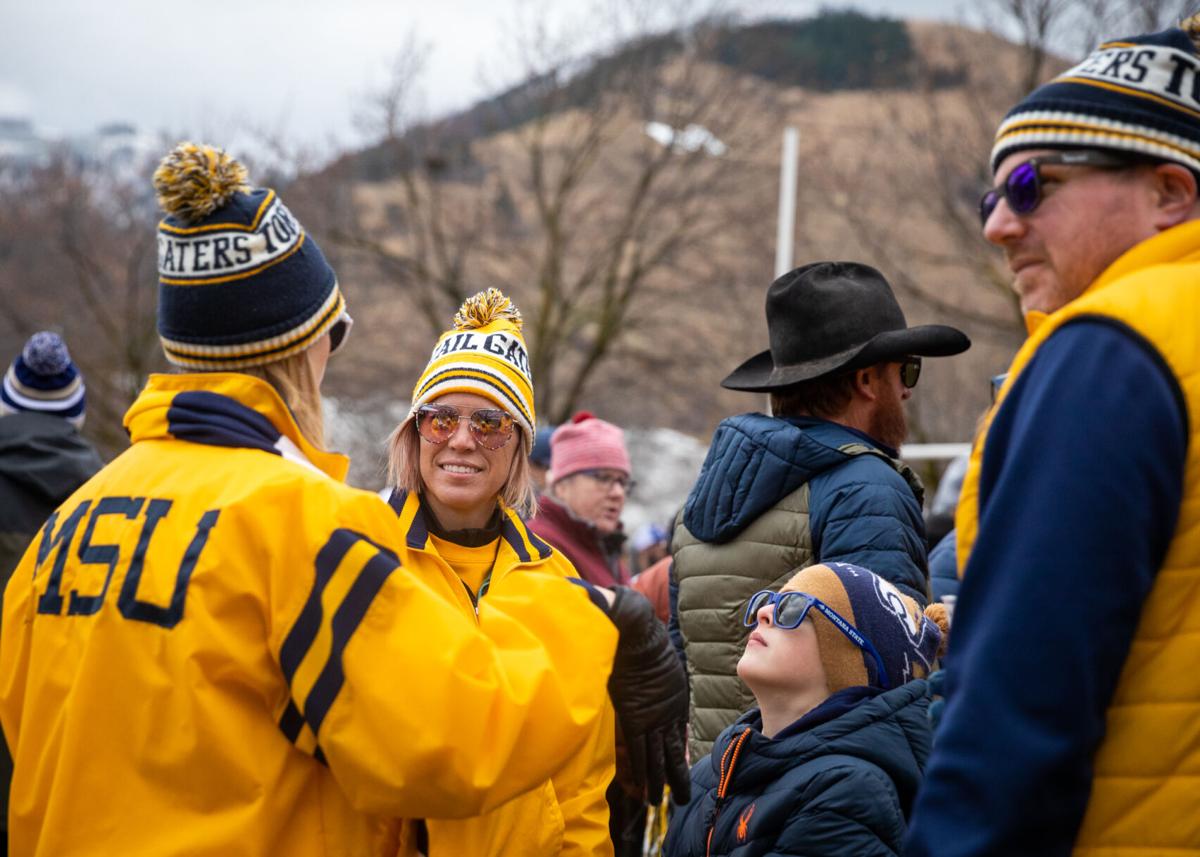 Montana State tailgaters held pregame celebrations in the parking lot of the Adams Center prior to the 120th Brawl of the Wild, Nov. 20. Alumni Engagement at MSU helped organize a Cat-Griz tailgate outside Washington-Grizzly Stadium. 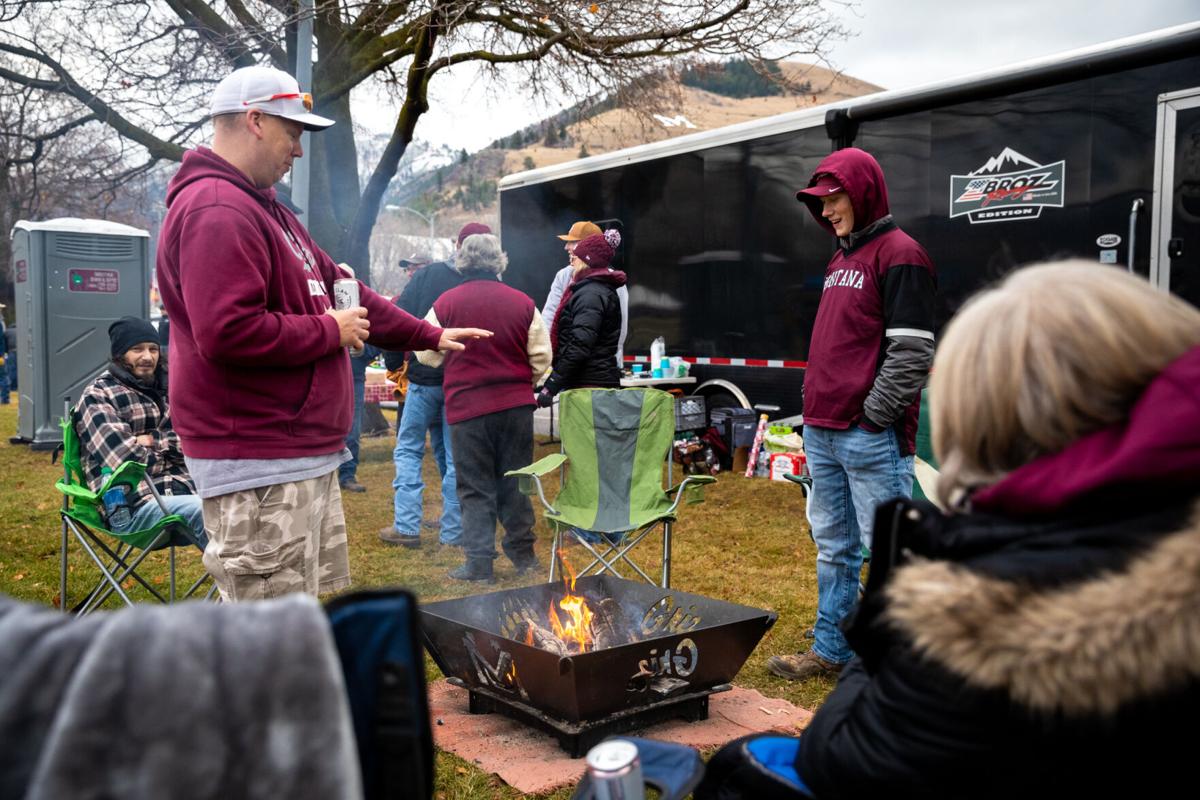 Grizzly tailgaters set up fire pits to warm themselves outside Washington-Grizzly Stadium on a chilly and vibrant Cat-Griz morning.

Montana State tailgaters held pregame celebrations in the parking lot of the Adams Center prior to the 120th Brawl of the Wild, Nov. 20. Alumni Engagement at MSU helped organize a Cat-Griz tailgate outside Washington-Grizzly Stadium.

Grizzly tailgaters set up fire pits to warm themselves outside Washington-Grizzly Stadium on a chilly and vibrant Cat-Griz morning.

After the dust settled following the 120th Brawl of the Wild, the streets of downtown Missoula were absent of any signs of celebration. Traveling fans returned home for Thanksgiving weekend, students vacated campus and the manic energy of the pre and post-game celebrations on Nov. 19-21 left the city with a massive week-long hangover.

But for a brief, dazzling moment, Missoula was alive with a fever. Grizzlies head coach Bobby Hauck said in the post-game conference he expects his team to beat everyone they play, but “this is the most important [game.]”

As the clock ran down, Griz fans belted “Sweet Caroline” across town. They swayed arm in arm, their voices carrying from Washington-Grizzly Stadium down the Clark Fork and into the heart of downtown. In the Missoula Club, there were signs of what a riotous evening it would become.

ESPN reporter and UM graduate Kevin Van Valkenburg, in a video essay as part of the ill-fated social media campaign promoting the Brawl for College GameDay, said of the rivalry, “For Montanans, it’s as much a declaration of identity as it is a football game.”

Between the chants of “FTC,” an older man decked out in vintage copper and gold bought a round of drinks for a few lone Bobcats fans before ducking out the door. There, no one was thinking about the College GameDay disappointment. There was a much bigger wave of pride and triumph to be caught up in.

“This is the only game I care about,” said UM student Fritz Meixner. “I don’t give a fuck about a championship. This is what matters to Missoula.”

Some festivities started as early as Friday in the form of an MSU fan jamboree at the Badlander. The hottest young people’s club in town was populated by a host of gray-haired Cats fans.

Kerry Hanson, Vice President of Alumni Engagement at MSU, helped organize the event. She grew up in Missoula, but attended school in Bozeman, and said she’s lived on both sides of the rivalry.

“The game isn’t about skill. It’s about emotion,” Hanson said. “We’re all friends, we’re all family. And end of the day, we live in the same state, and we both have incredible football teams.”

Both Moreau and Hanson believe the context of the rivalry changes between student life and graduate life.

“I think it’s emotional for students,” Moreau said. “Emotions have a tendency to heat things up.”

According to athletics expense reports, though it has about 60% higher enrollment than UM, MSU spends just as much on its athletics programs with a yearly budget of $22-23 million.

In The Rhino, the scene was chaotic. The night before the Brawl brought out Griz fans from every sphere, but at 12 a.m. only the rowdiest old timers stayed there to drink, play pool and talk trash on the Cats among friends and strangers.

Rick Anderson, a Billings native and 1983 UM grad, said, “Growing up in this state, you gotta pick your tribe, you know? Grizzlies, that’s my tribe.”

He spoke between shooting pool and nearly slipping on the beer-slicked floor.

“Sixteen years of us winning got ‘em so goddamn mad. But I like to give ‘em shit, cuz I get shit back from ‘em,” Anderson said.

Scott Curry, a Cut Bank native and Oregon State graduate whose children attend MSU, said, “There’s total love here, love on both sides of the rivalry. Those who win are gonna hug those who cry.” Though that could’ve just been the booze speaking.

At the tailgates the next day, current students had a different outlook. UM seniors Miranda Cambell and Samatha Moore carried signs toward the stadium reading: “Once a Griz, always a Griz. Once a Cat, always a pussy.”

“There’s a lot of emotion here for sure,” Campbell said. “It’s a super fun rivalry, but we won’t mellow out. No way.”

A third student, Kevin Moore, chimed in, “You don’t have any quotes from me, but you can quote me as saying ‘Fuck the Cats.’”

During the game, the scene from downtown was decidedly more mild. During the first half, the Missoula Club held perhaps two dozen patrons. As the Brawl went on and a Grizzly victory looked inevitable, the place filled up quickly.

When the clock ran out, there was hardly room to throw arms up in celebration. From then until 2 a.m., every bar in town was packed.

A bartender at Missoula Club was excited for an influx of generous tip money, and said, “Most bars aren’t going to let you take the day off, anyway.”

At the end of the night back at The Badlander, where the Cats alumni hosted their tame gathering the night before, there were scenes of unpublishable debauchery. Above the pulsing bass and strobing kaleidoscopic lights, a slow chant grew. “FTC! FTC! FTC!”