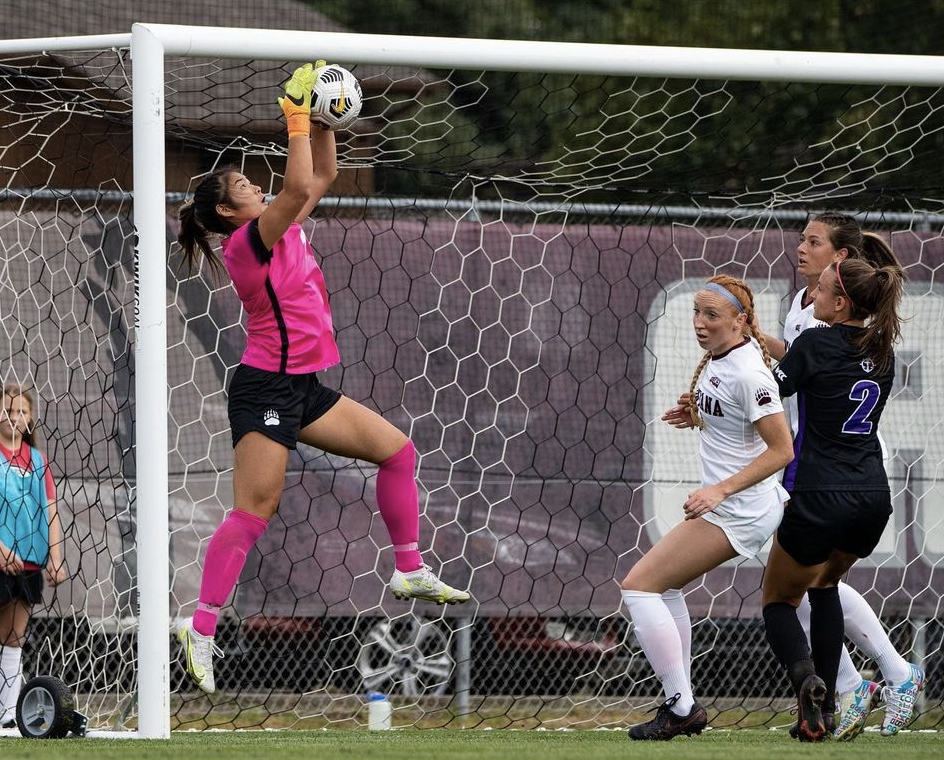 Montana goalie Camellia Xu leaps into the air to block a shot on goal from the Portland Pilots on Aug. 22. Xu, a British Columbia, Canada, native, has won the Big Sky Conference Defensive Player of the Week twice. 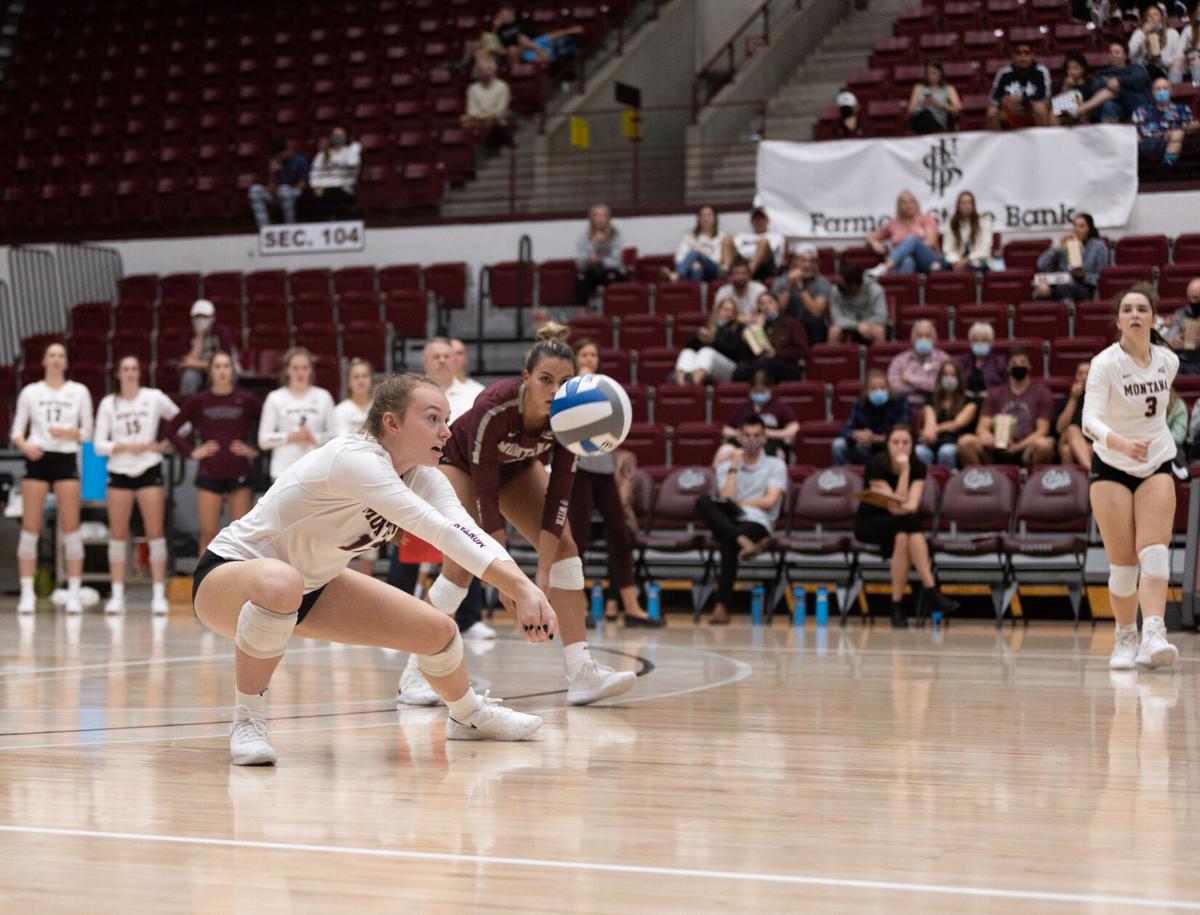 Montana defensive specialist Sarah Ashley bumps a serve from Weber State during a match at Dahlberg Arena on on Oct. 2. Griz volleyball got swept 0-3 by the visiting Wild Cats. 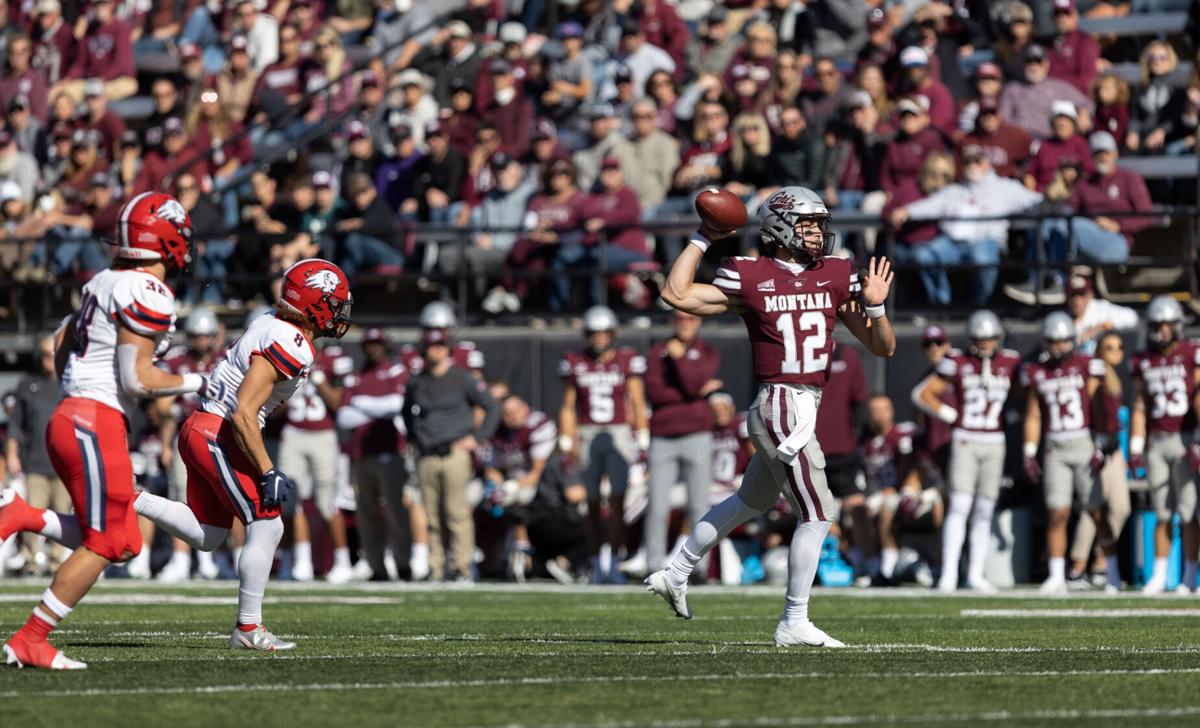 Montana redshirt freshman quarter back Kris Brown cocks his arm to throw the ball to a teammate as the Griz face-off against Dixie State at Washington-Grizzly Stadium. After a rough start in the first half, UM came out on top and beat Dixie State 31-14. Brown completed 20 passes for 241 yards and a touchdown pass. 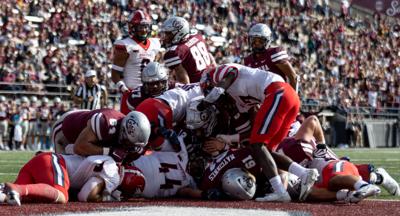 The University of Montana soccer team hit the road to take on Northern Colorado Oct. 10 in a battle of unbeaten Big Sky Conference teams and lost 0-1.

Northern Colorado entered the game with a 4-0 record in conference play while UM had a conference mark of 3-0-1. The Griz also had a seven-game shutout streak entering the matchup.

The game was very close throughout, with Northern Colorado taking 14 shots compared to UM’s 10. In the 38th minute of the game, Montana broke its program record of most minutes without allowing a goal with a staggering 703 scoreless minutes.

But UM’s celebration for the milestone didn’t last long, as two minutes later UNC scored a goal to go up 1-0. Montana couldn’t muster up a goal for the rest of the game and the final score stayed at 1-0 in favor of UNC.

The loss was only UM coach Chris Citowicki’s fifth loss against a conference opponent. Three of Citowicki’s five losses have come against the bears. UM hasn’t won on the road against UNC since 2009.

Members from both the Montana men’s and women’s cross-country team traveled to Billings to compete in the Yellowjacket Open, hosted by Montana State University-Billings. The men’s team won the meet while the women’s team didn’t send enough runners to place.

Four other runners on the men's team placed in the top 20 at the meet, which was hosted by Rocky Mountain College along with MSUB. A runner from Rocky won the men’s and the women’s races.

UM’s cross-country teams will next compete at the UC Riverside Highlander Invitational in Riverside, California, on Oct. 16.

The University of Montana’s volleyball team traveled to the Palouse area to take on the University of Idaho on Oct. 7 and Eastern Washington University on Oct. 9, winning one game while narrowly losing the other.

The Griz swept Idaho, winning 3-0. The team lost to Eastern Washington 2-3. The win against Idaho was UM’s first Big Sky Conference victory of the season.

True freshman Paige Clark had a very successful game against Idaho, racking up 12 kills. UM came out strong in the first set against UI, winning 25-16. The Griz were much more successful on their attacks throughout the match, posting a hitting percentage of .156 compared to Idaho’s .064.

In the third and final set, Idaho once again played hard, but Montana held strong and won 25-23. A large part of UM’s victory was its serving, tallying eight total aces compared to UI’s three.

Two days later, the Griz traveled to Cheney, Washington, to take on the Eagles of Eastern Washington. The first set of the matchup was close, but UM ended up pulling away in the end and beat EWU 25-21, taking a 1-0 match lead.

The second set ended with a 27-25 Eastern Washington victory. EWU flipped the script from UM’s last game and had three more service aces than the Griz in the match.

The third set was once again close, but Eastern Washington won again, 25-23 and took a commanding 2-1 match lead. EWU needed to win only one more set to finish the match, but Montana wasn’t done yet.

The Griz battled in the fourth set and came out on top of the Eagles, winning 27-25. UM winning the fourth set meant that a fifth and final set would be played, with the winning team only having to score 15 points.

Splitting its weekend road games gave Montana a record of 6-10 and a conference record of 1-5. UM’s next game will be against Portland State at home on Oct. 14.

The University of Montana men’s tennis team traveled to Salt Lake City, Utah, to compete in the Utah Invitational on Oct. 7-10 and saw its team members win two singles titles.

The UM team as a whole went 15-3 through the invitational, competing against athletes from Montana State, Weber State, Utah State, Idaho State and Utah.

UM’s next venture will be at the Bulldog Invitational hosted by Gonzaga in Spokane, Washington on Oct. 29.

The Griz defeated Dixie State at home Oct. 9 in a game that saw Montana start a new quarterback and score only three points in the first half.

“It was an exciting fun game to be a part of,” UM head coach Bobby Hauck said. “[I’m] really glad to get the win.”

The game was the first-ever matchup between UM and freshly Division I Dixie State, which is playing its first season as a D1 team. UM started redshirt freshman Kris Brown at quarterback after its original starter Cam Humphrey was carried off the field without putting weight on his right ankle in UM’s last game.

Brown had an up-and-down game in his first start, logging 241 passing yards and a touchdown while throwing one interception and fumbling once. Brown was also sacked three times and struggled to get offensive momentum going in the first half.

The first 10 drives of the game didn’t end in any points, and six of them ended in punts. The score at the end of the first quarter was 0-0. One of UM’s lone highlights in the first quarter came when defensive back Justin Ford intercepted a Dixie State pass in the end zone.

Montana finally opened up scoring midway through the second quarter when kicker Kevin Macias made a 27 yard field goal to put the Griz up 3-0.

Both teams buckled down defensively for the rest of the first half, and the halftime score remained 3-0. The last time UM scored just three points in the first half was against Washington in its season opening game Sept. 4.

In the second half, Montana’s offense finally kicked it into gear. True freshman Junior Bergen ran in a six yard touchdown early in the second half to give UM a 10-0 lead.

Bergen was originally playing receiver for the Griz in 2021, but because Montana’s main running backs are injured, Bergen has been playing running back instead. He had 44 rushing yards on 14 carries in the game.

After Bergen’s touchdown, UM’s offense once again marched the ball down the field and scored, this time in the form of a Brown pass to tight end Cole Grossman. Grossman had 70 receiving yards in the game, more than any of UM’s receivers. The Brown-to-Grossman connection put the Griz up 17-0.

At the end of the third quarter, Montana still led 17-0 and fans began filing out of Washington-Grizzly Stadium. Montana’s attendance was listed at 23,434, the first time that its stadium hasn’t been sold out in the season.

Brown took in a rushing touchdown from a yard out early in the fourth quarter to extend Montana’s lead to 24-0. He had 27 rushing yards in the game, but was sacked for a total of 29 yards. His rushing total was -2 yards.

On Dixie State’s first drive of the second half, it looked like the Trailblazers might score, but Ford recovered a fumble that he returned out to midfield.

Montana’s celebration after Ford’s big play didn’t last long, as five plays later Brown fumbled the ball and Dixie State returned it for a touchdown. The Trailblazers attempted a two point conversion, but failed, so the score stood at 24-6 in UM’s favor.

Brown got redemption later in the game when he rushed for another one-yard touchdown to put the Griz up 31-6. Dixie State scored on a passing touchdown on its next drive. The Trailblazers late rally wasn’t enough, though, and UM won 31-14.

Montana had 440 total yards compared to Dixie State’s 261. The Griz allowed Dixie State to gain a measly average of 1.3 yards on its rush attempts.

UM is now 4-1 on the season, and thanks to losses from top ranked FCS teams in the country, the Griz will return to the top five in the country. UM’s next game is against Sacramento State at home on Oct. 16.

Dixie State, which is playing an independent schedule before it joins the Western Athletic Conference next season, is now 0-5.

The University of Montana golf team traveled to Tacoma, Washington, to compete in the Pat Lesser Harbottle Invitational on Oct 11. As on Oct 12, UM was in 20th place out of 20 teams in the invitational with junior Jessica Ponce as its highest ranked golfer in 63rd place.

Prior to the invitational in Washington, UM hosted a tournament in Missoula in which it placed first out of two teams. Ponce placed the highest of any UM individual in the invitational with a second place finish.

A tale of two Missoulas: Previewing the race for mayor

With less than a week until the Nov. 2 local election, Missoula’s two mayoral candidates are making their final pitches to voters, which pit the experience of incumbency against calls for more fiscal responsibility.  Read more

As the University of Montana saw its first enrollment increase in 10 years, campus-wide efforts by the Office of Admissions and the vice president of enrollment management are looking to continue the growth trend through a remodeled recruitment system. Read more

A University of Montana computer science professor resigned Friday afternoon, the announcement coming after Kaimin reporting on his blog “Upward Thought” sparked controversy and condemnation from UM and across Montana.  Read more

Ryan Surmi would spend his entire day studying at a corner table in the Payne Family Library at the Missoula College. The PaddleHeads DJ and second-chance student re-enrolled at the University of Montana in 2018 to make a new start for himself and get an Information Technology degree.  Read more

Halloween bash was a smash in the UC