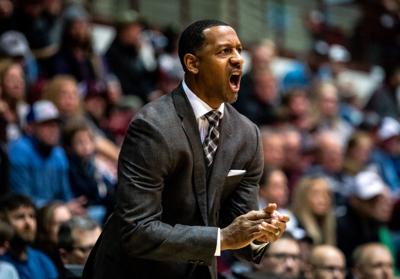 With less than half a minute left to play, Michael Oguine had the ball and pressed into Jacob Davison, one of Eastern Washington’s top players, who fouled the Griz guard.

Oguine went to the free-throw line with the two teams tied 74-74. The Eagles had closed a 12-point lead in the second half. The Griz, unable to shake the Eagles, spent the last two minutes of the game on Saturday fighting to break ties.

The history of the rivalry between the Griz and the Eagles runs long. Last year in the Big Sky Conference Championship Game, the Griz took the title from the Eagles after closing an 11-point halftime lead, but this season the Griz fell to the Eagles on the road in early January. Going into to Saturday’s game, with the Eagles ranked fifth in the conference and the Griz in the number one spot, victory seemed tamable.

Not so quick. Heavy fouling, Jamar Akoh's absence, Sayeed Pridgett's foul out, and a late hot streak from the Eagles' shooters left the Griz in a tied game with 30 seconds to the end.

Oguine made one of two free throws, giving the Griz a one-point lead, and the arena was practically on fire, hot enough that everyone forgot the below zero temperatures outside.

Davison passed the half court line and entered the dominion of Bobby Moorehead’s defensive prowess. He needed one basket and the Eagles had time. They could beat the Griz a second time this season.

“The crowd was really loud that last possession," Oguine said. "I couldn’t even hear myself think."

But Davison, unable to pass around Moorehead’s arms, drove to the basket, pulled up and missed an eight-foot jumper. Donaven Dorsey, a redshirt senior guard, pulled down the defensive rebound as the buzzer sounded and the crowd roared.

Then chaos erupted again. There were coaches running toward the muddle, fans almost spilling onto the court. It looked as if a fight was breaking out. It calmed down. The team was victorious. The refs looked uncertain. One blew his whistle helplessly against a thundering crowd. Was the win going to stick? What the hell was going on?

Replay tape showed an Eagles player wrapped around Dorsey’s neck and Oguine trying to push him off. Then players had to hold teammates back and coaches yelled as the two teams verbally, and almost physically, clashed.

The refs confirmed the win, deciding that the foul came after the final buzzer, following an unbearable minute of uncertainty.

And that was how head coach Travis DeCuire netted his 100th career win at the University of Montana. He is the second-fastest coach in Griz history to reach this milestone, behind Blaine Taylor, and the fifth coach to ever reach the mark at UM.

He returned to his alma mater as head coach in 2014 with a Big Sky Conference championship win. His success continued as he reached 50 wins faster than any other coach in conference history and became the only coach at UM to tally 20-win seasons back-to-back. Last season he won Big Sky Coach of the Year.

Since DeCuire joined UM, after Wayne Tinkle left for Oregon State, the program has evolved in ways easily overlooked due to his impressive records. Associate coach Chris Cobb, who has been with the program for all five of DeCuire’s coaching seasons, said that everything from the health of meals to the balance of travel times for players has improved. DeCuire centers his decisions concerning the basketball program squarely on the players.

“The main focus of what we are doing,” Cobb said, “is what’s the best for [players] to be good in the classroom, to be good on the basketball court, and to be happy in their social lives.”

Cobb has watched DeCuire figure out his message and level out his intensity and trust his coaching staff more. But DeCuire’s ability to prepare for everything in anything he does before it even happens sticks out to Cobb the most.

“He is one step ahead of everybody else. He takes a very schematic organized approach to everything,” Cobb said.

“He’s prepared for a season, how we are going to practice, how he builds practices, how practices feed into games, and how we prepare a team to show up and play a game.”

As for DeCuire’s 100th win, Cobb guaranteed that the milestone was far from the coach’s mind.

“That is what separates good teams from really special teams,” Flores said. "He’s learned the effort and small things that funnel into running a D1 basketball program from DeCuire.

“It is much more than drawing plays on a whiteboard in a timeout,” he said.

Part of DeCuire’s success comes from his ability to create a culture where he genuinely cares about the players under his tutelage.

“When the guys know that you care and love them, they’re able to perform at a level that they probably didn’t even know they could by themselves,” Flores said.

“I had the opportunity to play and work with some great coaches and I learned some things that I have been able to use," DeCuire said. "At the end of the day, I have a phenomenal staff and phenomenal players, and you can’t win without that.

“I’m along for the ride, and I am enjoying it."

Eastern Washington’s head coach, Shantay Legans, said Montana is lucky to have DeCuire as a coach.

Legans is looking forward to playing against him this season and in coming years if the Griz can hold onto DeCuire as a coach.

“You guys got to ante up and keep him here,” he said.

The Griz are 17-6 and 10-2 in conference. They play Weber and Idaho State on the road next week.

Protestors halted traffic on a Higgins Avenue crosswalk outside of El Cazador Friday evening in response to growing unrest about the building of the  Costal GasLink pipeline in Canada.  Read more

UM Catering has kept 31,000 pounds of food waste away from the landfill as of its fifth month of composting this February. Read more

Students may be able to earn degrees faster with micro-credentials

University of Montana Provost Jon Harbor pitched a new way to earn a degree faster to the faculty union at its last meeting: micro-credentials. These digital credentials would certify a student’s competency in a particular skill or trade. Faculty Senate Chair-Elect Chris Palmer said the sena… Read more