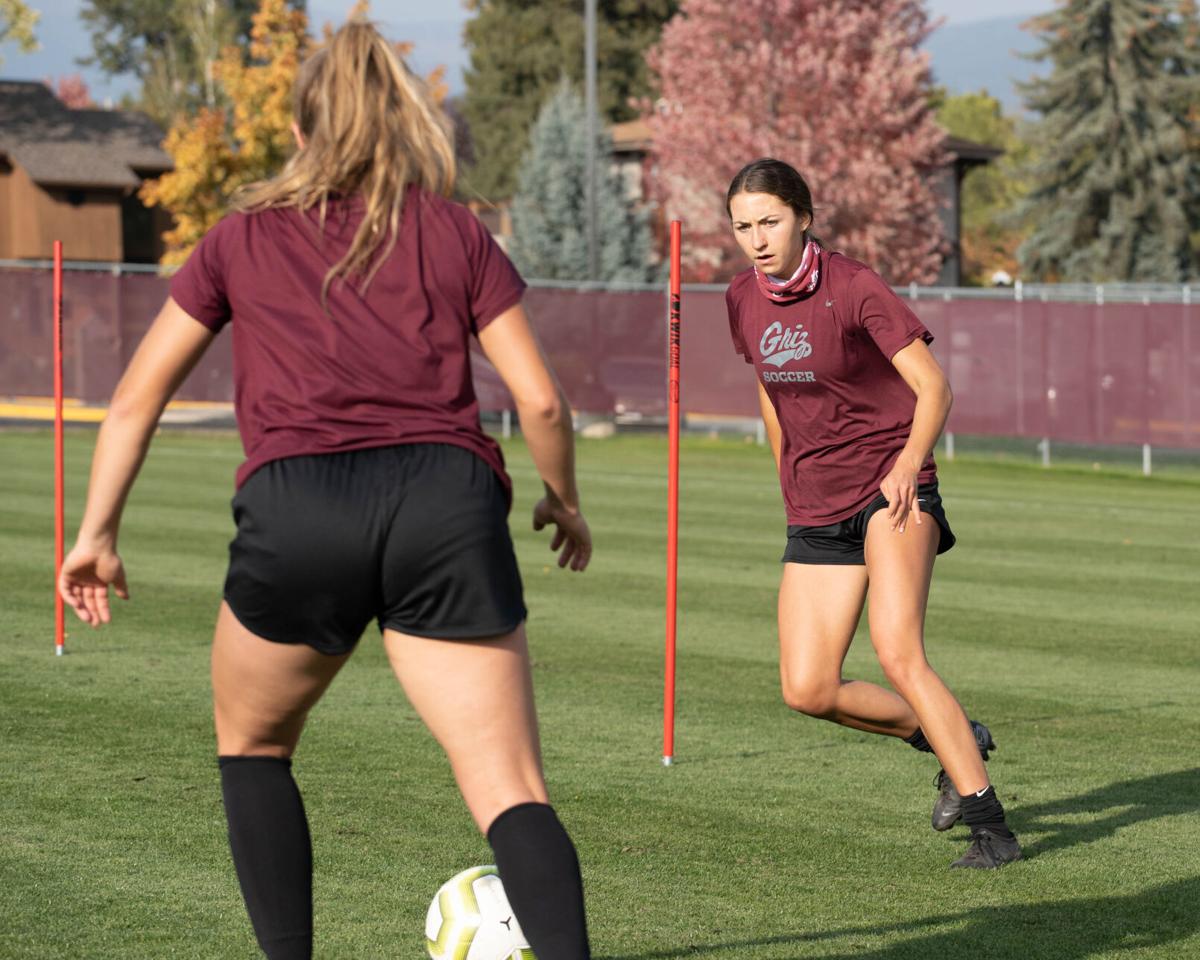 University of Montana women's soccer team senior and captain Alexa Coyle receives the ball from a teammate during a drill in Thursday's optional practice. The Big Sky Conference delayed the fall soccer season to the spring due to COVID-19, and UM's practice is temporarily optional. "We typically have a lot more players at practice, but we made this week optional because of the rising cases," head coach Chris Citowicki said. 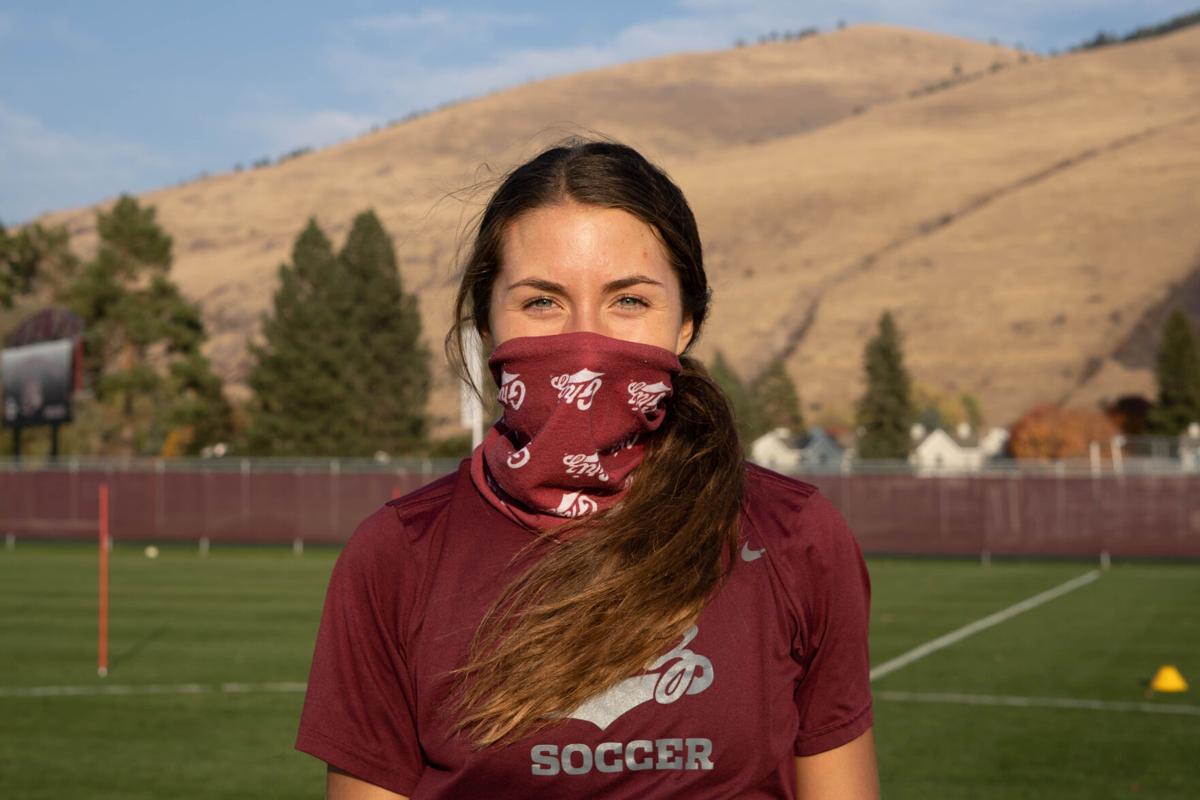 University of Montana's senior soccer captain Alexa Coyle wears a Griz neck gaiter during their optional practice on Thursday. The Big Sky Conference pushed the fall soccer season back to the fall due to COVID-19 and rising cases, but Coyle said the team is taking advantage of the extra time to practice. “We really just want to continue improving, taking advantage of the extra time, and having fun,” Coyle said. 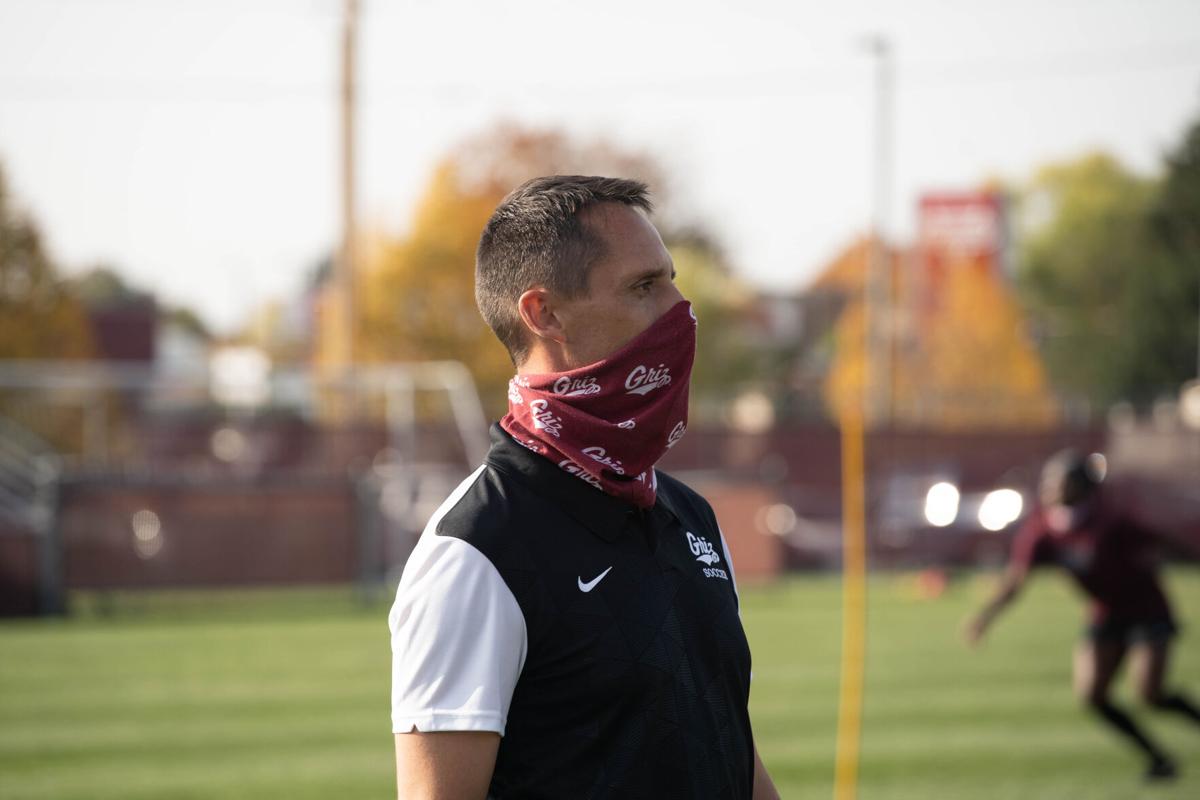 UM soccer's head coach Chris Citowicki watches players complete a drill in Thursday's optional practice. The COVID-19 pandemic delayed the fall soccer season until the spring, but Citowicki said the team has been practicing since August 9th and has been using the extra time to their advantage. “We’re practicing at a really high level right now, and I’m just really looking forward to being on the field,” Citowicki said.

For the first time in 19 years, the University of Montana women’s soccer team was voted number one in the Big Sky Conference’s preseason poll.

In the preseason poll, the votes are cast by other coaches in the conference who rank every team but their own. He attributed Grizzly Soccer’s number one ranking to the team’s first place finish in the regular conference last year. During the season, his team gave up only two goals, and with no seniors on the team, all of his players will be returning.

For senior and captain Alexa Coyle, a forward on the team, the number one ranking comes with added pressure.

“Of course, any recognition like that, and being voted number one, is awesome, but it also motivates us to put in the work to get there and actually be number one,” she said.

Citowicki, too, said that a huge part of being chosen as the number one team is the added psychological pressure of living up to that rank. He said that one of his goals for the team this year is to teach the girls how to deal with that pressure.

UM came into the Big Sky Tournament last year with the first seed after an undefeated regular season, but lost in the first round.

The team is now looking toward a spring season. Citowicki said that the team has been practicing since Aug. 5. Both Citowicki and Coyle also said that those practices have been beneficial, especially for freshmen on the team.

“Most of the time, freshmen come in and get put into an incredibly competitive environment,” he said. “Usually, it’s sink or swim, and if you sink, you don’t get a chance to really play until January.”

He also noted that because of the postponed season, the freshmen on his team have had more time to prepare, causing the team’s freshmen to be at a place now that they typically don’t reach until April of their first year.

“It just makes my job harder to choose who’s going to be on the field,” he said.

Coyle said that the team has been using the unexpected fall off-season to their advantage.

“It’s been a great opportunity for growth,” she said.

She also said that upperclassmen on the team have had the chance to get to know the freshmen, giving everyone an opportunity to build relationships and improve the team’s dynamic.

Citowicki is looking forward to seeing the team play. He said the team is practicing at a high level, and he’s excited to see what they can do once they are actually on the field in a competitive environment.

However, Citowicki did say that he feels it is necessary to have a few backup plans in case the spring season is postponed due to COVID-19. He didn’t specify what these backup plans were.

His main worry is that, if spring soccer is taken away, the team will have gone a full year without competition.

Coyle said the coaches have kept the team focused on practices in the moment, and that she is keeping her eyes set on being able to play in the spring.

“We really just want to continue improving, taking advantage of the extra time and having fun,” she said. “My biggest goal this year is for us to be the best we can be, both as a team and individually.”